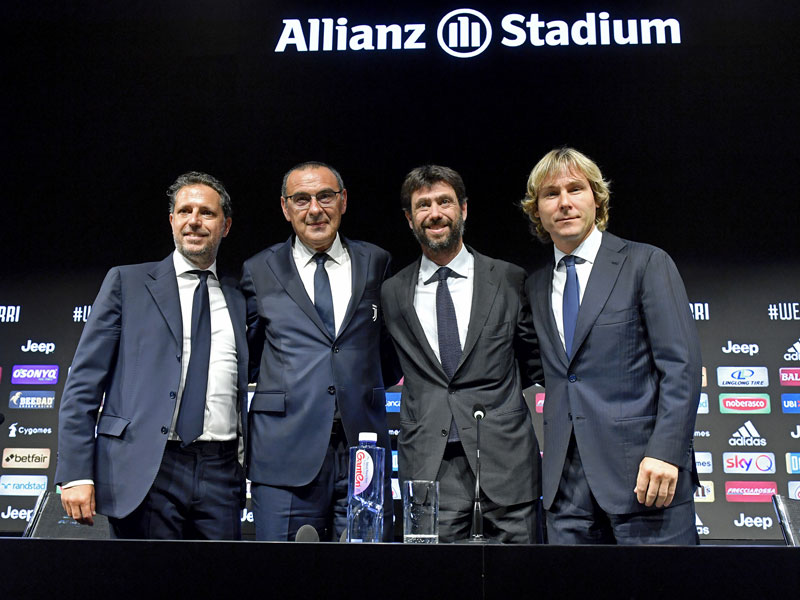 When former Napoli and Chelsea coach, Maurizio Sarri, turned up last week at the Allianz Stadium in Turin to “sign on” as the new Juventus coach, he was stepping into perhaps the “hottest” seat in contemporary Italian football.

At first glance, it is clearly a no-brainer to want to coach this Juventus team. Winners of the last eight Italian league titles and twice Champions League finalists in the last five years, Juventus have been far and away the strongest team in the land for most of the last decade.

However, do or do not all good things eventually come to an end? Is it reasonable to expect Juve not only to win a ninth consecutive title but also to mount a serious challenge on the Champions League, their most coveted objective?

Given all current form, it is of course reasonable to expect the winning Juventus bandwagon to keep on rolling, at home and abroad. However, such are the impossibly high standards that the Old Lady has set for herself that new coach, 60-year-old Sarri will have to win both the scudetto and the Champions League next season, in order to improve on the record of his predecessor Massimiliano Allegri. No pressure, Maurizio, old son.

Juventus and, in particular, figures such as their inspirational vice-President, former club great Pavel Nedved, hope that Sarri can wind it up, even further. The decision to offload the man who had just dominated the Italian season, in the process winning a fifth consecutive title, seems to follow an obvious enough logic.

In a sense, Juventus concluded that with this guy (Allegri), they can win league titles forever and a day but not the much desired Champions League.   Otherwise, why dump a coach with such a phenomenal winning track record?

When he presented himself in Turin last week, Maurizio Sarri summed up his new job succinctly when he said:

“Juventus is the most important club in Italy. If I hadn’t taken this job, I would be guilty of disrespect to myself and my career…”

In other words, I just had to take this job. The onetime bank official, who started off as a coach at amateur level almost 30 years ago, simply could not look this gift horse in the mouth. The question remains, though, can he now move on from winning the Europa League with Chelsea to winning the Champions League with Juventus?

That remains to be seen but, at this very early stage, we can imagine the type of Juventus Sarri has in mind, based on some of his statements last week.   He spoke of how players, not coaching schemes, make the difference in attack. He suggested that established team players such as Argentine Paulo Dybala, Brazilian Douglas Costa and Italian Federico Bernardeschi still have room for improvement.

Intriguingly, he said that his first port of call in his new job would be a visit to CR7, Cristiano Ronaldo, to hear just how the Portuguese icon sees the new Juventus. Equally intriguingly, he wanted to see Bosnian schemer Miralem Pjanic touch the ball 150 times per match.

Sarri also seemed to suggest that old Juventus flames, Argentine Gonzalo Higuain of Chelsea and Frenchman Paul Pogba of Manchester United, will not be returning to Turin, after all. Given that another much speculated transfer move, that of Fiorentina striker Federico Chiesa to Juventus, now looks less likely in the wake of a commitment by new Fiorentina owner, Rocco Commisso, not to sell the team’s most valuable player, we can draw some conclusions.

Namely that the new-look Juventus of Sarri will feature a lot of very old-look names, starting with the familiar backbone of Bonucci-Pjanic-Dybala-Ronaldo. Clearly, Sarri hopes to drill his new squad into something similar to his successful Napoli side of two and three seasons ago, in the process making the best of the talent at his disposal.

In short, Sarri will not lack for quality material but will he be able to outdo his predecessor. Indeed, to perform even as well as his predecessor is a tall order. In his Turin news  conference, Neapolitan Sarri admitted that during his three years at Napoli (2015-2018), he used to wake up every morning, wondering how his side could beat Juventus, adding:

Dare we suggest that, for the next 11 months, Maurizio Sarri will be waking up every morning wondering how he is going to win the Champions League.   As we said, this is the hottest seat in Italian football.