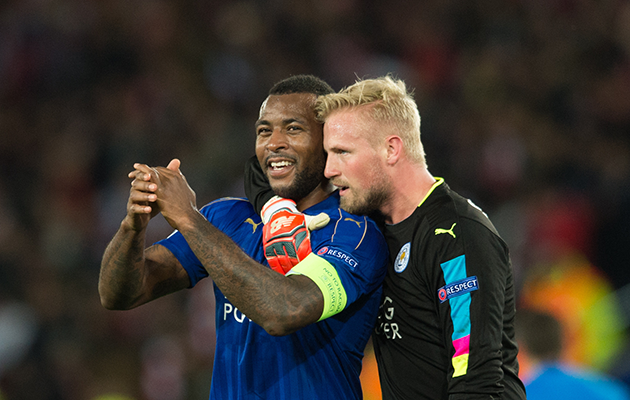 Leicester City’s manager Craig Shakespeare said his team could be the surprise package in the Champions League after they defeated Sevilla to reach the quarter-finals.

On an emotional and breathless evening at the King Power stadium, Wes Morgan and Marc Albrighton scored the goals that gave Leicester a 2-0 win and a 3-2 victory on aggregate. The English champions, making their debut in the competition, will now take their place alongside European heavyweights and perennial contenders such as Barcelona, Real Madrid, Bayern Munich and Juventus.

Sevilla, who have won the Europa League in each of the past three seasons, had Samir Nasri sent off after receiving a second yellow card following an altercation with Jamie Vardy, who was also booked for his part in the confrontation.

Jorge Sampaoli, the Sevilla manager, was also sent to the stands and, in another late twist, Kasper Schmeichel saved Steven N’Zonzi’s penalty.

“When we needed Kasper the most he came up trumps,” said Shakespeare, who earlier this week was appointed manager until the end of the season, following Claudio Ranieri’s sacking last month.

“We deserve to be in the quarter-finals, we have just knocked out one of the best teams in Europe in my opinion. I think it has to stand right up there with all of our achievements because of the quality of the opposition. We know there will be some terrific teams in the last eight, as there were in the previous round, but we’re in there on merit – we might just be the surprise team.

“Against one of the best teams in Europe we needed to keep cool heads but also show that competitive edge, so the plan was to press high and make it as uncomfortable as possible for Sevilla.”

Schmeichel, who also saved a penalty in the first leg of the tie, described Leicester’s achievement in reaching the last eight as ‘incredible’.

“It is an unbelievable achievement,” Schmeichel said. “We had a game plan, we stuck to it and it came off perfectly. We always knew they would have a lot of possession.

“First half they played really well but you know you have to defend against a team that keeps the ball like them and we kept them to just a couple of chances.

“It is about confidence. We have gone out and played more like we did last season and we are reaping the rewards of it now. It was a fantastic night.

“A lot of us have come a long way. I’ve been all the way down in League Two and to be standing here in the Champions League quarter-finals is incredible.”

Sevilla coach Jorge Sampaoli , who has been linked with a move to Barcelona at the end of the season, lamented his side’s missed penalties.

“It’s been decisive that we’ve missed two penalties in the tie,” Sampaoli told his post-match press conference. “Things could have been different.

“We’ve tried different penalty takers because of who was on the field. Steven stepped up and it was a great save by Schmeichel. As a result we are going away with nothing tonight.” 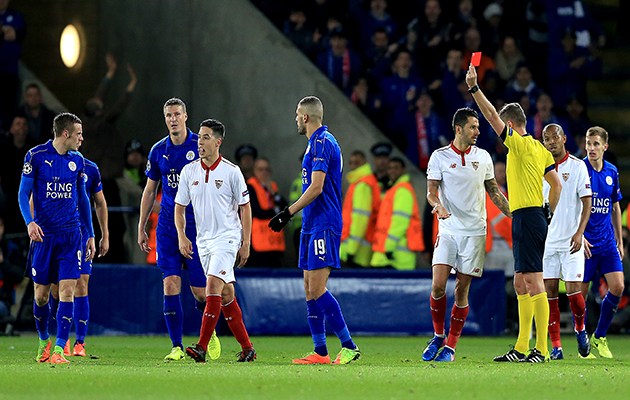 Sampaoli refused to comment on Nasri’s dismissal, which came at a time when his team were very much in the ascendancy.

“It’s not for me to evaluate why [Nasri] was sent off. The referee is the judge in these matters,” he said.

“I was never going to take him off. He had been a key player for us. I didn’t want to take him off for tactical reasons at all. He was instrumental in taking the attack to Leicester.

“We lost on a few fine details. We did not make the most of the chances we created. We had three decent chances before their second goal, which made it difficult for us.

“Obviously it became a really tall order after we went down to 10 men and missed the penalty.”