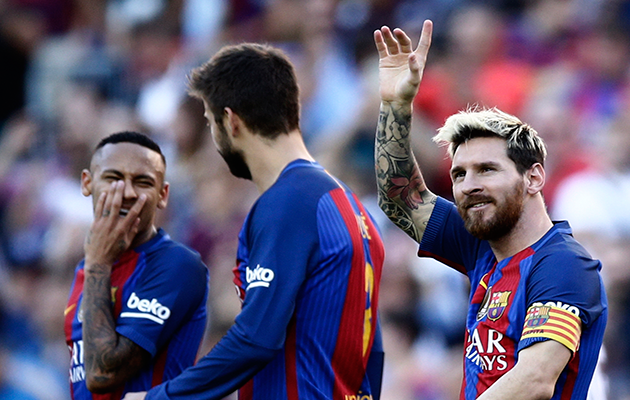 In the age of Fake News perhaps we should not be surprised to learn that an interview with Lionel Messi did not actually take place.

The 29-year-old was was quoted in an interview with Coach magazine dismissing links with a move to Manchester City and reaffirming his commitment to Barcelona.

“I have always said that Barcelona has given me everything and I am here for as long as they want me to be,” Messi had reputedly said, when asked whether he would consider playing in the Premier League.

Messi named Frank Rijkaard – and not the current City boss and former Barca man, Pep Guardiola – as  the most significant influence of his career.

“All the coaches I have played under I have learnt things from, but you always look back to the one that gave you that first chance – that was [Frank] Rijkaard for me. He had to show that trust in me to train with the first team, then play my first game – he started everything for me,” he had supposedly said.

However, Messi’s family have reportedly told Goal that the interview is “totally false”, and insisting that the player had not spoken to the publication.

Even the purported writer of the piece, Diego Jokas, has tweeted to say that he did not interview Messi and nor has he written for Coach magazine.

Speculation persists over Messi’s future at Camp Nou, with his contract expiring at the end of next season and negotiations over a new one still at an early stage.

The club’s CEO revealed last week that any new deal with the player depended on a number of factors, notably, the club’s commercial revenue, as well as the money generated by player sales. In his plea for ‘cool heads’, Oscar Grau said Barca must exercise common sense when negotiating with Messi.

Meanwhile, Barcelona coach Luis Enrique, speaking ahead of Barca’s Copa del Rey clash with Real Sociedad on Thursday, seemed fed up with being asked about Messi’s contract and refused to discuss his contract situation.