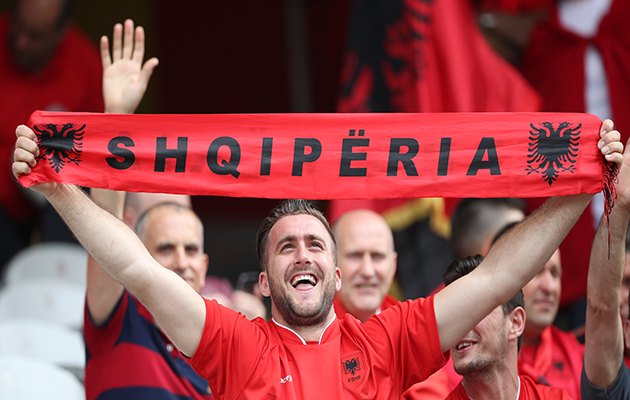 Albania and Switzerland are not neighbours, but due to the recent history of the continent of Europe and in particular the conflicts that scarred the Balkans in the 19990s, this fixture could be described as the first derby match at Euro 2016.

Ten members of Albania’s squad were either born in Switzerland or grew up there, with seven of those even playing for the Swiss at under-21 level before switching allegiance to the country of their parents.

Meanwhile, six Swiss players have family links to Albania or Kosovo. That includes soon-to-be Arsenal midfielder Granit Xhaka, who will face his brother Taulant this afternoon.

“The game will be really difficult, like all opening games, because there is the factor of added pressure,” he said. “It is a strange game where footballers of Albanian origin will play against each other. There are two brothers that play for two different countries. It will be a massive game for us.”

It has to be said that expectations within the Albania camp are on the low side, with De Biasi not hopeful of reaching the knockout stages.

“If we manage to get through the group stage it would be a surprise,” he admitted. “For me, success would be our people being as proud of us at the end of this competition as they are now at the beginning.

“I would like to say that all our players have honoured the shirt, that they have given 110% and fought together – it made all the difference in qualifying.  “

The pressure, therefore, would appear to be on Switzerland, but their coach, Vladmiri Petkovic admitted that the surreal nature of today’s encounter could lend the match an unusual atmosphere.

“The first couple of games are always hard to predict,” he said. “There are always so many emotions involved – particularly in this match. It’s our aim to make history together, but it will be difficult. Hopefully people back home will be talking about this team for many years to come.

“Our aim is clear: to play better than Albania and win the game. To do that, we need to keep our cool and remain focused. Albania are defensively sound and very well-organised so we need to make sure we capitalise on their mistakes.”

Coach Gianni de Biasi will make a late decision on the fitness of Taulant Xhaka, who made his comeback from a thigh injury by playing 45 minutes in their final warm-up game.

He has inherited the armband from Gokhan Inler, who was left out of Switzerland’s squad after a barely featuring for Premier League chmpions Leicester last season.