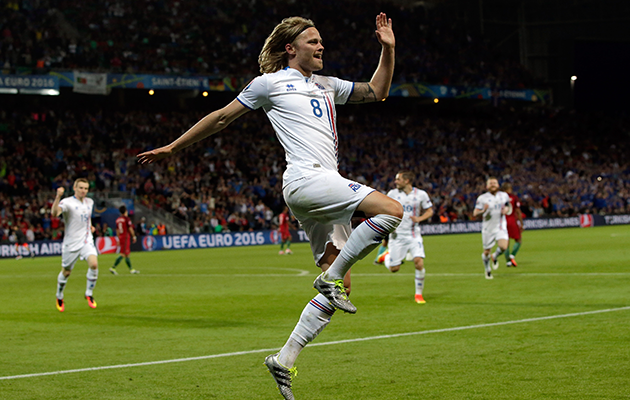 This was not in the script. Birkir Savarsson swings a deep cross into the Portuguese penalty area where the unmarked Birkir Bjarnason sweeps home from close range. Full-back Vieirinha was the closest defender to Bjarnason, but his positioning for the goal was dreadful. 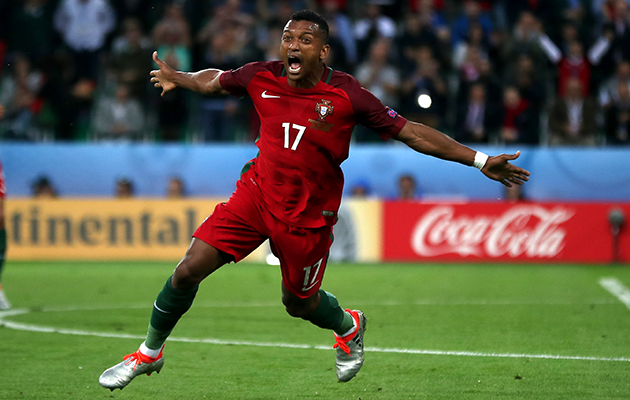 Portugal ahead as Iceland suffer a costly lapse in concentration. Andre Gomes is relased down the right and his cross finds Nani who doesn’t need to bnreak stride before clipping a shot past Halldorsson at the near post.

Cristiano Ronaldo has been quiet so far, but he provides a glimpse of what he is capable of with a pinpoint cross that picks out Nani, whose header is scrambled away to safety by Iceland keeper Hannes Þór Halldorsson.

Iceland break down the left and the ball is played to Gylfi Sigurdsson, who cuts inside Pepe before trying to beat Rui Patricio at the near post. The keeper does well to parry away the initial effort before gathering the second attempt from Sigurdsson. 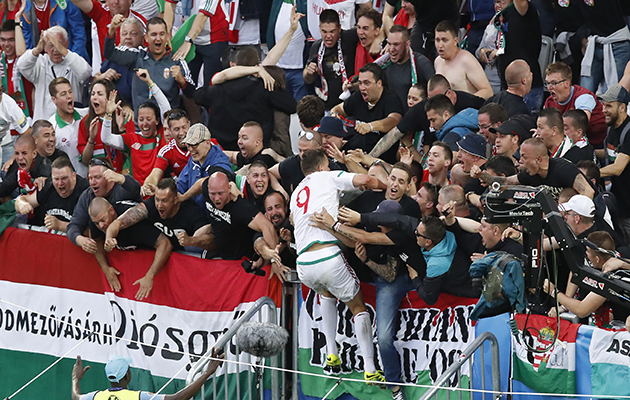 Read our match report of what is the first significant upset of Euro 2016. 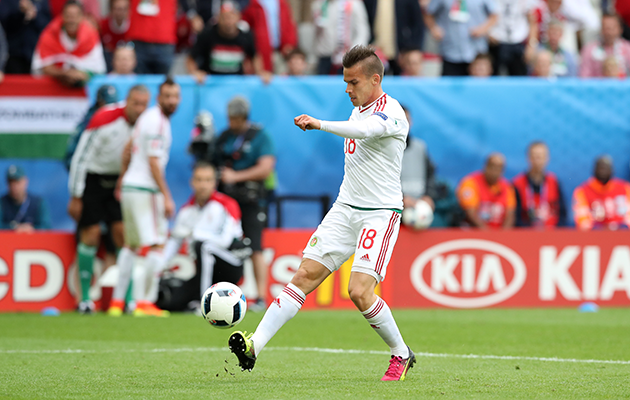 In pushing for an equaliser ten-men Austria have left themselves light at the back and they are punished by a ruthless Hungarian counter-attack. amas Priskin picks out the unmarked Zoltán Stieber and he draws the keeper before deftly chipping into the empty net. Cue pandemonium behind the goal where the Hungary fans are situated.

It goes from bad to worse for Austria as Austria’s Aleksandar Dragovic gets a second booking for fouling Tamas Kadar. 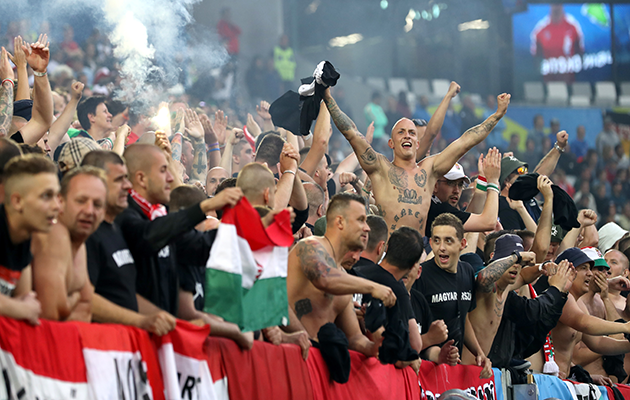 Well that was unexpected, not least the identity of the goalscorer. Adam Szalai scores his first goal in 18 months. The big target man plays a neat one-two with Laszlo Kleinheisler, before Szalai slides in to poke the ball under the onrushing Robert Almer.

Austria almost take the lead in the opening minute. Austria’s big-name player, David Alaba, lashes in a shot from 25 yards and the 40-year-old keeper Gabor Kiraly is beaten, but the ball comes back off the post.

Russia have been threatened with expulsion from Euro 2016 if there is any repeat of the awful scenes of hooligan violence witnessed in Marseille on Saturday.

Austria-Hungary and the lessons of history

Keir Radnedge has written a fascinating piece on the historical context of today’s encounter between Austria and Hungary. Once a joint empire, Austria v Hungary is not only one of the great footballing derbies, but it also offers a lesson in the history of 20th century Europe.

Ahead of this afternoon’s game between Hungary and Austria, we have an interview with Bernd Storck, the man who has taken the Hungarians to the finals of a major tournament for the first time in 30 tears. 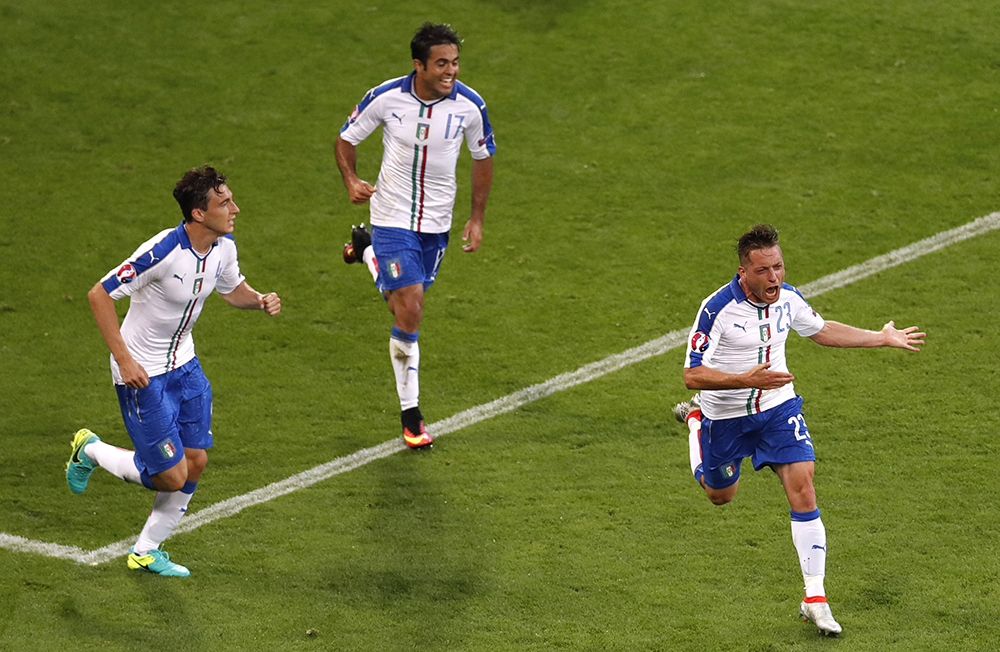 Italy’s Emanuele Giaccherini celebrates after scoring his side’s first goal during the Euro 2016 Group E soccer match between Belgium and Italy at the Grand Stade in Decines-Charpieu, near Lyon.

Italy gave one of the best performances of this tournament so far in defeating Belgium 2-0 in Lyon last night. Paddy Agnew was at the game and spoke to Antonio Conte afterwards about what he describes as an ‘elegant masterclass’.

Austria coach Marcel Koller has taken the team up to 11th in the Fifa rankings.

Tipped by England coach Roy Hodgson as an outside bet to win Euro 2016, Austria, under the astute leadership of Marcel Koller, have risen through the Fifa rankings. We spoke to Koller on the eve of the tournament about the secret of his success and his hopes for the finals.

A Premier League winner with Leicester City, and now about to lead his country at Euro 2016, it’s been quite a year for Austria’s Christian Fuchs. 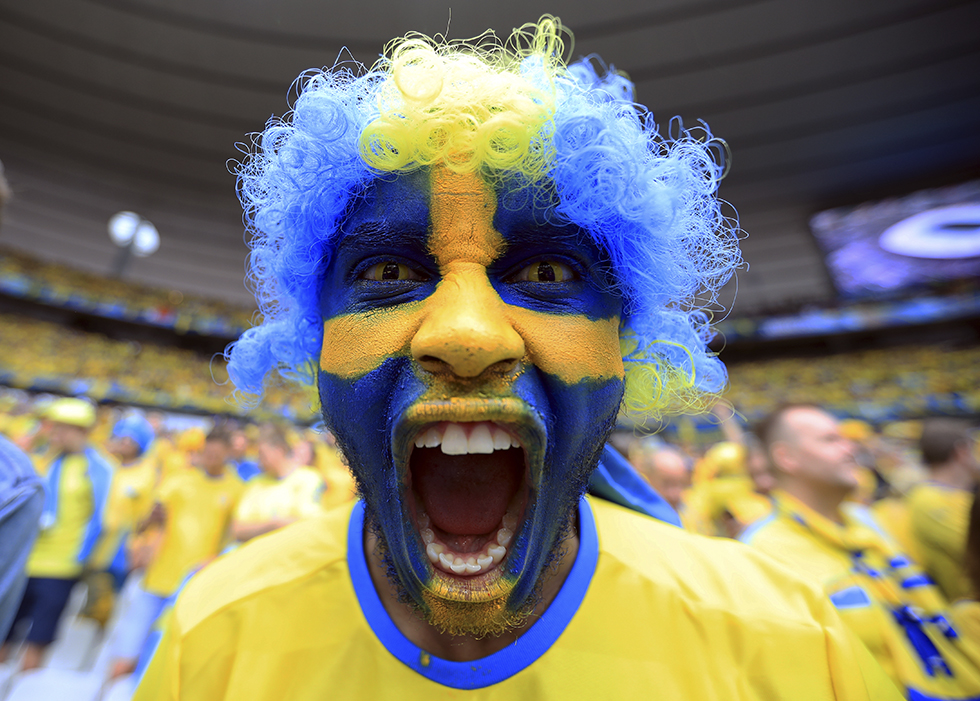 An excited Sweden fan in the stands during the Group E match at the Stade de France, against Republic of Ireland.

Each day we’ve bringing you the outstanding images from Euro 2016. Today, it is an animated Sweden fan who leads our pictures from Day 4.

The first round of group matches reaches its conclusion today with four teams making their Euro 2016 entrance. Among them will be Cristiano Ronaldo’s Portugal who face debutants Iceland in Saint Etienne tonight, while in the day’s other Group F clash, Austria meet Hungary in Bordeaux.

While Ronaldo will hog most of the limelight in the Stade Geoffroy Guichard, it will be worth keeping an eye out for a youthful Portugal midfield, and in particular a new emerging star, Renato Sanches, who recently completed a €35million move to Bayern Munich, and of whom great things are expected. 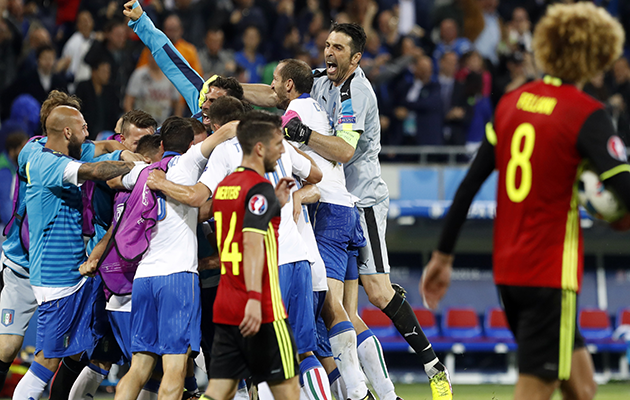 Italy celebrate their Euro 2016 victory over Belgium in Lyon.

The 2-0 victory in Lyon showed once again that in the absence of star quality there is no substitute for good organisation and tactical intelligence – qualities Italy and their canny coach, Antonio Conte, possess in abundance. 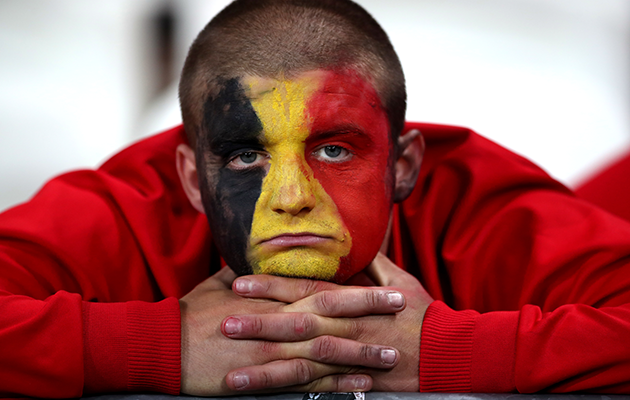 The pressure on Belgum coach Marc Wilmots and his underperforming team  will now be intense.

Earlier in the day, Ireland and Sweden shared the spoils in a lively encounter in Paris, while holders Spain left it late to defeat an obdurate Czech Republic side.