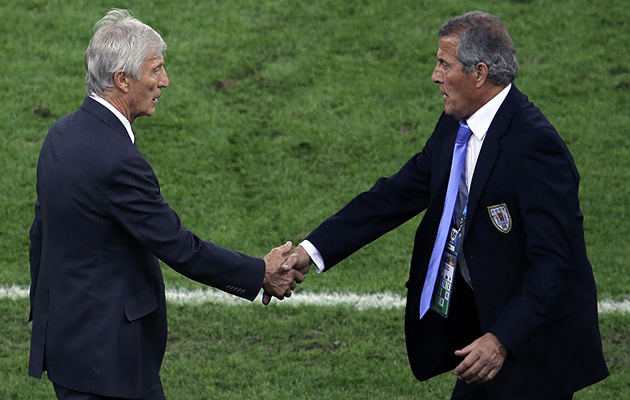 Thursday ninth round of South America’s World Cup qualification campaign put some breathing space between the top five and the rest (the first four go through automatically to Russia 2018, with the next team facing a play off against opponents from Oceania).

The gap between Argentina, in fifth, and Paraguay, a place below, is four points – meaning that Argentina are guaranteed fifth place even if they lose to Paraguay on Tuesday.  Indeed, the gap could grow wider in the tenth round, because there is only one when two sides from the top five are up against each other.

That is the meeting of fourth placed Colombia and leaders Uruguay – and what promises to be the latest fascinating chapter in a rivalry which in recent times has had a significant impact on World Cup slots.

In the campaigns of 2002, 2006 and 2010 the battle for the play–off place was fought between Uruguay and Colombia, teams at opposite ends of the continent and with different traditions.  Uruguay, of course, were the first kings of the global game.  Colombia were much slower out of the blocks, not setting up a professional league until the late 1940s – and then enjoying considerable help from Uruguayan players and coaches. 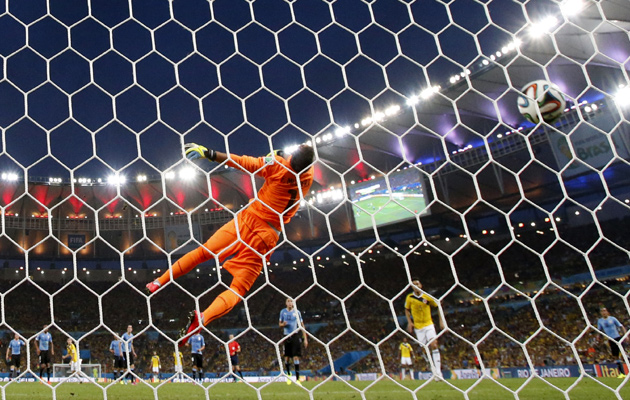 James Rodriguez scores the goal of the 2014 World Cup tournament against Uruguay.

It was Uruguay who came out on top in 2002, 06 and 10, squeezing out Colombia each time by the narrowest of margins.  The Colombians gained some revenge in the last World Cup, the first time they had qualified since 1998.  In the second round they met Uruguay in Rio’s Maracana stadium – a venue of massive importance to Uruguayan football since it was there that they won their second world title in 1950.  This time, though, they fell to a tame 2-0 defeat, with James Rodriguez scoring the goal of the tournament as Colombia made it through to their debut quarter final.

Rodriguez is currently injured, and will not be present in Tuesday’s game.  It will very interesting to see how much of a difference this makes.

Uruguay’s gameplan is clear.  Coach Oscar Washington Tabarez asks for little more than that his side be hard to play against.  There are no aesthetic pretentions.  Uruguay look to keep things tight – they have conceded just 5 goals in the 9 previous rounds.  When opportunity presents itself, they seek to win the ball high, play quickly into the space behind the opposing full backs and get bodies into the penalty area.

It was how they overcame Venezuela in Montevideo on Thursday.  The visitors could easily have been two goals up.  But they made one mistake- left back Mikel Villanueva was caught in possession by Carlos Sanchez, who quickly played diagonally into the space behind the other full back, where Luis Suarez was lurking to send in a cross headed home by the arriving Nico Lodeiro.  “You can’t give a centimetre to a rival who has such a clear scheme of play,” lamented Venezuela coach Rafael Dudamel after his side’s 3-0 defeat.

Lodeiro is suspended for the visit to Colombia, and in his absence Tabarez will probably tilt the balance of the midfield further towards defence; Matias Vecino could come in, or Matias Corujo move up from right back, where Jorge Fucile could be introduced.  Suarez and Edinson Cavani will be ready to pounce on any mistake, and while the game is goalless Uruguay will be happy.

The onus, then, will be on Colombia to take the initiative.  In recent times this has not come very easily to the Colombians, even when James Rodriguez has been present.

Following a disappointing spell after the 2014 World Cup, Jose Pekerman’s side are making progress towards defining their new identity; in the last five rounds they have accumulated four wins plus a narrow defeat away to Brazil, after a run when they collected just one point from the three previous matches.  But they have often looked far happier on the counter attack.

Last Thursday’s 1-0 win away to Paraguay is a good example.  Colombia snatched the three points with a goal in the final minute.  They would probably have left content had it finished goalless.  Effective defence was their priority, and their biggest ally was an opponent over-reaching to break the deadlock.

This time Colombia will be striving to score the opening goal.  Presumably Pekerman will retain his front three- Carlos Bacca at centre forward, with Juan Guiilermo Cuadrado and Luis Fernando Muriel working the flanks.  But what will he do with his midfield trio?  Carlos Sanchez anchors, and against Paraguay both Abel Aguilar and Wilmer Barrios carried out mixed roles.  Does he replace one of them with a more creative player?  He has the passing skills of Macnelly Torres, or the inconsistent talent of Edwin Cardona, who came off the bench to chip home the late winner against Paraguay.

Or does Pekerman start cautiously, and trust that the scorching afternoon sun of Barranquilla will wilt the Uruguayans and help open up spaces for a second half onslaught?

Alternatively, the fact that even in defeat Colombia will still be in the top five could lead Pekerman to conclude that on this occasion the boldest solutions might be the best ones.