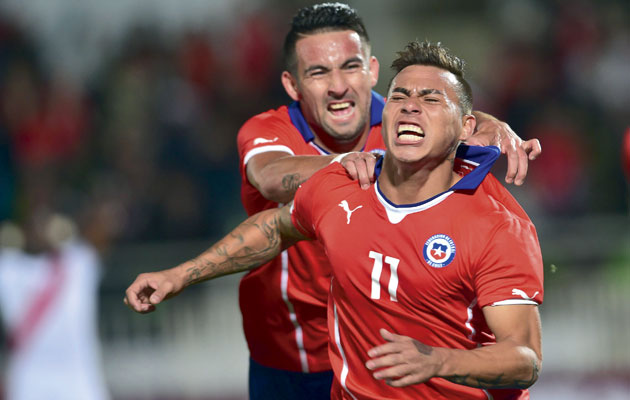 It is fair to say that Jorge Sampaoli is well aware of the dangers that lie ahead for his side. “Chile have never won the Copa,” says the Argentinian. “And seeing that we’re up against opponents who’ve won it an immense number of times, demanding victory is a little irresponsible.”

The burden of being at home has been playing on the coach’s mind for a while – perhaps ever since the epic second-round encounter with Brazil at the World Cup, where his side were the width of a crossbar away from springing a surprise.

“Hopefully, the responsibility of being hosts will not generate the same pressure on us as it did on Brazil,” say Sampaoli. And he is taking positive steps to ensure that it does not.

Serious thought was even given to the idea of letting the squad prepare in Europe, flying home just a few days before the tournament. Sampaoli saw this as “fundamental because it allows us to focus solely on the Copa”. He reasoned that “we have huge responsibilities in the tournament and we can’t permit lapses of concentration”, and it was only at the start of May that the plan appeared to be discarded as impractical.

With two solid World Cups behind them, many feel that the current generation – who are seen as Chile’s best ever – look set to launch a challenge for the title in front of their own fans.
There are, however, a few worries for Sampaoli, other than the hype that comes with playing on home soil.

For example, will key players Marcelo Diaz and Eduardo Vargas be fully fit in time? Who is going to play at centre-forward? And will the side be able to maintain the intense rhythm required by the coach during the entire tournament?

Jorge Sampaoli likes his side to press high, playing at an accelerated rhythm, and will hope they create two-against-one situations down the flanks.

This game plan is interpreted in one of two ways: either 4-3-3, which is normally employed against weaker opponents, or 3-4-1-2 against stronger sides. In the World Cup, they used the former against Australia and the latter in their other games.

Playing 4-3-3 in recent friendlies led to a defensive vulnerability, and defeats against Uruguay and Iran, which makes 3-4-1-2 look more likely.

If Eduardo Vargas is unfit, however, it is possible that Arturo Vidal and Jorge Valdivia might both operate behind Alexis Sanchez in a 3-4-2-1.

Claudio BRAVO
Age 32 (13.04.83)
Barcelona (Spa)
Captain and keeper who is the country’s most-capped player of all time. With the team defending high up the pitch, he needs to be swift and decisive when coming off his line.

Gary MEDEL
Age 27 (03.08.87)
Internazionale (Ita)
Stocky, feisty central midfielder at club level who operates in the back line for his country. Tackles hard and passes well, although his lack of height can be seen as a problem.

Marcelo DIAZ
Age 28 (30.12.86)
Hamburg (Ger)
Central midfielder who protects the defence but is able to initiate attacks with his passing. One worry is that he has had a disappointing, injury-hit first few months in Germany.

Jorge VALDIVIA
Age 31 (19.10.83)
Palmeiras (Bra)
Vital figure, although he is unlikely to start every game. Always controversial, often injured, but a twinkle-toed playmaker of real talent who cannot easily be replaced.

Alexis SANCHEZ
Age 26 (19.12.88)
Arsenal (Eng)
A winger, striker and attacking midfielder rolled into one, he offers talent, vision and work rate. The question is, will he be running on empty after a first season in the Premier League?

Jorge SAMPAOLI
Age 55 (13.03.60)
Constantly pacing his technical area, the little Argentinian is a self-confessed Marcelo Bielsa disciple. His big breakthrough came in charge of club side Universidad de Chile in 2011-12.