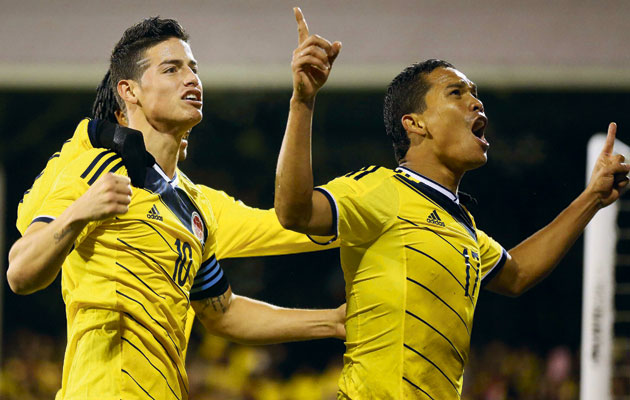 In the run-up to Brazil 2014, coach Jose Pekerman said that the tournament would mark the moment when Colombia took a definitive place at football’s top table.

His side lived up to the opening part of that prediction, reaching the quarter-finals for the first time; now comes part two as they look to consolidate and become consistent top-level performers.

The grounds for optimism at the Copa are the same as those carried into the World Cup, only now on a much firmer footing. Colombia have a splendid generation of strikers and attacking midfielders, with fears of a dependence on Radamel Falcao proving unfounded.

In his absence through injury, James Rodriguez came to the fore as the leading attacking force. Rodriguez, his playmaking deputy Juan Quintero and striker Carlos Bacca, have all added to their prestige and experience since last summer.

Much of Colombia’s focus in Chile will be at the other end of the field, with long-term defensive linchpin Mario Yepes’ international career having finally come to an end.

Pekerman spent the post-World Cup friendlies blooding a new breed of defender, and the progress of Jeison Murillo and Pedro Franco will be closely watched in their first competitive internationals – especially in the second game against Brazil, one of the potential highlights of the group phase.

With some identifying Colombia as the tournament dark horses, one of the most interesting aspects will be whether they can live up to those expectations.

Radamel Falcao has never looked entirely happy as a lone striker, so when he plays for Colombia they usually line up in a 4-4-2 formation, with Carlos Bacca seemingly now in front of Teo Gutierrez as the other forward.

In Falcao’s absence, Jose Pekerman tends to deploy his second striker – often Adrian Ramos – wide on the left, allowing James Rodriguez to move into the centre in a 4-2-3-1.

It will be interesting to observe the position of the defensive line. Previously, the need to protect Mario Yepes meant that Colombia defended very deep; they should now be able to move higher up the pitch.

David OSPINA
Age 26 (31.08.88)
Arsenal (Eng)
First-choice keeper who came through a first Premier League season well. With an inexperienced unit in front of him, he will have to take more responsibility for organising defence.

Jeison MURILLO
Age 22 (27.05.92)
Granada (Spa)
Quick, combative centre-back who, despite playing for a struggling club, has looked impressive in the post-World Cup friendlies. He will join Internazionale next season.

Abel AGUILAR
Age 30 (06.01.85)
Toulouse (Fra)
Unsung hero of the midfield, he marks with intelligence and his passing knits the team together. He was mystifyingly left out of the World Cup quarter-final game against Brazil.

James RODRIGUEZ
Age 23 (12.07.91)
Real Madrid (Spa)
Left-footed attacking midfielder who was the revelation of the 2014 World Cup, where he was the leading scorer. The brains of the attack, he will be a marked man in the Copa.

Radamel FALCAO
Age 29 (10.02.86)
Manchester United (Eng) – on loan from Monaco (Fra)
Missed the World Cup with a serious knee injury and has had a frustrating time in England – but looked sharp on international duty in March.

Jose PEKERMAN
Age 65 (03.09.49)
Argentinian who made his name as his country’s youth coach before taking the seniors to the 2006 World Cup. An inspired choice to take over Colombia early in the 2014 World Cup qualifiers.