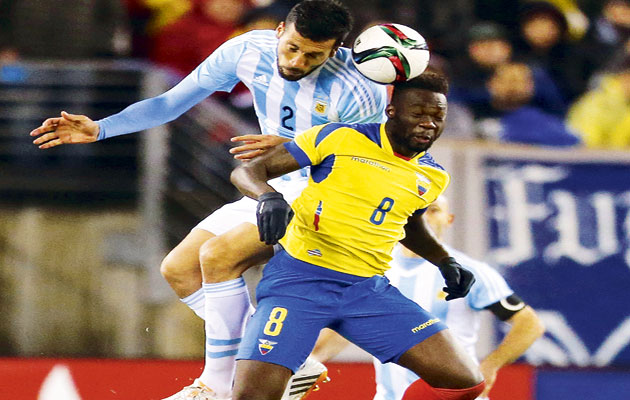 The only South American team not to make it out of the group stage in the last two World Cups, there were rumours of a rift in the Ecuador camp after Brazil 2014 – apparently confirmed when star wingers Antonio Valencia and Jefferson Montero were not called up for the friendlies late last year under caretaker coach Sixto Vizuete.

However, new boss Gustavo Quinteros is not a man to stand for that kind of nonsense, and Ecuador were, barring injuries, back at full strength for his first games in charge at the end of March, which resulted in narrow defeats by Mexico and Argentina.

Quinteros, who a couple of weeks earlier had seemed not so upbeat, was sufficiently pleased with what he saw to declare that “we are on the right path”.

He explained: “With nine or 10 more training sessions we can sort out the balance of the side.

“And hopefully we can play more than just three games in the Copa and pick up as much experience as possible on the way to the World Cup qualifiers.”

Based in the country since 2012, Quinteros says: “I was surprised by Ecuadorian football when I arrived. It’s much more competitive than I’d thought.”

Harnessing that pace and power, adding some organisation and sound man management, Quinteros may be quietly thinking his team could provide a shock or two in this tournament.

Gustavo Quinteros brings continuity by sticking to the recent tradition of playing 4-4-2 with a pair of quick, skilful wingers. A slight variation is to split the strikers to form something more resembling 4-2-3-1.

“I want us to press high and have the ball, to defend far from our own goal,” says Quinteros. But this can leave the team vulnerable to the counter-attack. “We have to organise ourselves better defensively,” he admits. “At times we leave ourselves wide open, with lots of space between the lines.”

This problem is enhanced even more by a lack of quality centre-backs.

Frickson ERAZO
Age 26 (05.05.88)
Gremio (Bra), on loan from Barcelona SCElegant centre-back but defensively suspect. Getting a bit more game time with his new club this year after a disastrous previous spell with Flamengo.

Christian NOBOA
Age 30 (09.04.85)
PAOK (Gre)
Central midfielder who has not looked back since scoring against Brazil at the 2010 World Cup.
He has an excellent range of passing and is the main supply line to the wingers.

Antonio VALENCIA
Age 29 (04.08.85)
Manchester Utd (Eng)
Central midfielder who was transformed into a winger of pace and power at club level, he now plays as a right-back – a switch Quinteros says is a possibility with the national team.

Enner VALENCIA
Age 25 (04.11.89)
West Ham United (Eng)
Has not looked back since being switched by Quinteros from wide midfielder to a striking role at Emelec. Scored 10 goals in 10 internationals last year, including three at the World Cup.

Miller BOLANOS
Age 24 (01.06.90)
Emelec
Blossomed under Quinteros last year as a dangerous and skilful support striker. He is a more mobile alternative up front to Felipe Caicedo, who is better with his back to goal.

Gustavo QUINTEROS
Age 50 (15.02.65)
Argentinian-born but a naturalised Bolivian, he played for his adopted country in the 1994 World Cup and coached them at the last Copa. Was with Ecuadorian club Emelec for three years.