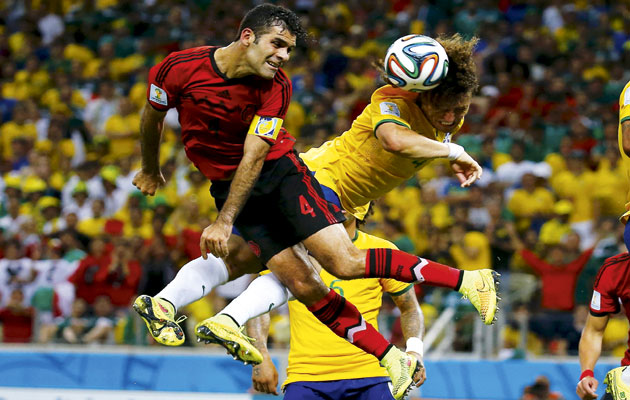 With plenty of talent at their disposal, and several of their key players starring at good European club sides, Mexico could, in theory, field quite a strong team at the Copa.

However, Real Madrid’s on-loan striker Javier Hernandez, Porto’s Hector Herrera and Carlos Vela of Real Sociedad will all be absent in Chile, as will the Dos Santos brothers and Espanyol’s Hector Moreno. This is because the Mexican FA has once again decided to send their strongest squad to the CONCACAF Gold Cup, which kicks off a few days after the Copa finishes.

The Mexican side that heads south will therefore be composed mostly of decent players from the Liga MX, youngsters based in Europe and veteran captain Rafa Marquez, who personally requested to play as part of a conditioning plan proposed by his club Verona.

Still, at least this team will be way better than the one Mexico sent four years ago, which, on CONCACAF’s request, was made up of under-23 players and embarrassed the nation by losing all three of their games.

The fact that same team ended up winning gold at the London Olympics wasn’t enough to convince the Mexican FA to repeat the experiment and this year’s squad should have enough quality to challenge for a second-round spot.

With so many first-choice players missing, it is unclear who will get the nod for a starting place in Chile. What is sure, however, is that Miguel Herrera will stick with the trademark 5-3-2 that he has used throughout his tenure and was employed with great success in Brazil 2014.

The system places great emphasis on the wingbacks, who cover the whole of their flank as the three midfielders stay central. Whether the Copa squad has players with the quality to do this remains to be seen.
The rest of the side has good quality, with Jesus Corona a safe choice in goal, Rafa Marquez providing leadership in defence, and a couple of strikers with great potential in Twente’s Jesus Manuel Corona and Raul Jimenez of Atletico Madrid.

Jesus Corona
Age 34 (26.01.81)
Cruz Azul
Gold medallist at the 2012 Olympics but lost his place to Guillermo Ochoa just before Brazil 2014. A good Copa could put him back into the starting XI for the Russia 2018 qualifiers.

Rafa Marquez
Age 36 (13.02.79)
Verona (Ita)
Chile will probably be the swansong for a captain who provides leadership to an inexperienced back line. A disappointing season in Italy saw him out injured for much of the time.

Luis Montes
Age 28 (15.05.86)
Leon
Elegant and technical midfielder who was set to feature in Brazil last summer before a leg injury sidelined him. Now wants to show the rest of the continent what it missed.

Jesus Manuel Corona
Age 22 (06.01.93)
Twente (Hol)
Can play in a variety of positions, although tends to be used as a support striker in Herrera’s rigid system. May leave debt-ridden Twente for a bigger club in the summer.

Raul Jimenez
Age 24 (05.05.91)
Atletico Madrid (Spa)
Struggled with the physicality of La Liga in his debut campaign and is likely to be loaned out next term – unless a good tournament in Chile changes opinions in Madrid.

Miguel Herrera
Age 47 (18.03.68)
Made a big impression at the World Cup with his celebrations and no-nonsense tactical approach. Says the Gold Cup is a priority but he “intends to win the Copa America as well”.