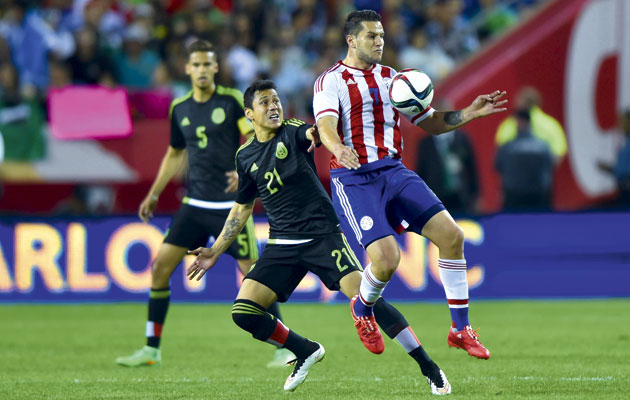 Gerardo Martino saw the signs in the previous Copa. A year earlier he had taken Paraguay to their first World Cup quarter-final; now they went all the way to the Final of the 2011 Copa – albeit without winning a single game. The coach understood that he had taken that team as far as he could and he resigned soon after a 3-0 defeat by Germany.

His replacement, Francisco Arce, made the mistake of trying to change too much too soon. Paraguay made a dreadful start to the 2014 World Cup qualifiers and never recovered. They finished bottom of the table, and after four consecutive finals had to sit out the one held on their doorstep.

And so, this year, Ramon Diaz has been appointed in a bid to get the team back on track. Like Martino, he is an Argentinian, but unlike his countryman he has no experience of Paraguayan club football. With limited time in which to keep track of players strewn all over the world, it is little wonder that Diaz says this job is “the biggest challenge of my career”.

He has wisely retained an experienced core of players in key positions down the spine of the team, but there could be a problem up front.

As it may be too much to expect Roque Santa Cruz to haul his battered body through yet another Copa, Lucas Barrios was recalled in March. But he looks a shadow of the man who led the line in the 2010 World Cup, so Diaz faces the traditional headache of Paraguay’s national coach: where will the goals come from?

As under Gerardo Martino, Diaz will attempt to build a side that can both take the initiative, and sit back and defend with typical Paraguayan resilience. In the friendlies at the end of March he had a look at two systems: a 4-3-3 with hard working wingers against Costa Rica, and 3-4-1-2 against Mexico – with the holding midfielder replaced by a third centre-back and a playmaker introduced in place of one
of the wingers.

The problem in both games was that they failed to score …

Pablo AGUILAR
Age 28 (02.05.87)
America (Mex)
Classy defender who can play anywhere along the back line and is seemingly destined to take over from Da Silva as the defensive organiser. Carries a threat from set pieces.

Richard ORTIZ
Age 25 (22.05.90)
Toluca (Mex)
Barrel-chested midfielder with strength, lung power and a useful left foot. Can operate centrally or wide – and even at left-back, where he made his senior international debut.

Oscar ROMERO
Age 22 (04.07.92)
Racing (Arg)
May not start as he has struggled since moving to Racing, but as a playmaker, his ability to surge forward and shoot from range could be a useful part of the team’s attacking play.

Raul BOBADILLA
Age 27 (18.06.87)
Augsburg (Ger)
Argentina-born striker who was recently naturalised and rapidly called up to the squad at the end of March. Stocky and strong, he can play in a wide or central attacking role.

Ramon DIAZ
Age 55 (29.08.59)
Ex-Argentina striker whose coaching career is most associated with River Plate but who also had a brief spell in charge of Oxford United. Appointed to his current post in December 2014.