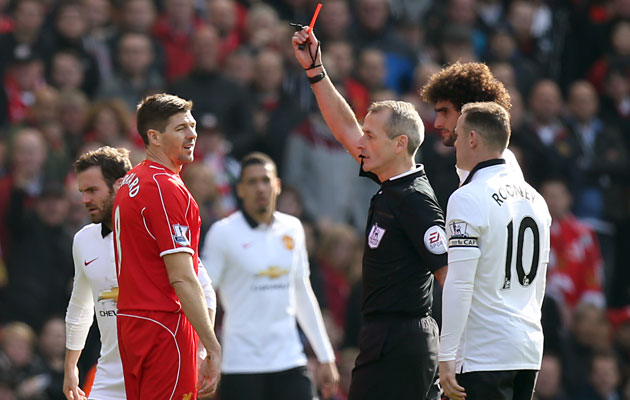 • Can Aston Villa deny Steven Gerrard the perfect send-off?
When Steven Gerrard announced he would be leaving Liverpool at the end of the season, all eyes turned to what might potentially be his final game in a red shirt.

An FA Cup final at Wembley was deemed an fitting stage for this loyal servant to make his final Liverpool appearance. Back in January this seemed somewhat optimistic, but four months on, Gerrard stands on the threshold of realising that dream. Now, only Aston Villa stand in the way of the climax of the oldest cup competition in the world being turned into the Steven Gerrard Cup final.

• Can PSG cope with the loss of Zlatan Inrahimovic?
There are talismans and then there is Zlatan Ibrahimovic, a player who has won 11* league titles with six different clubs, including two on the trot with his current side Pari Saint-Germain.

However, in a closely-fought title race which sees PSG trailing leaders Lyon by two points, the prolific Swede will be missing for the next three league matches. A rash outburst at a match official resulted in a four-match ban at a stage in the season when his side most need him. How costly willl that prove?

* Two of those titles won at Juventus were subsequently annulled.

• Where next for Klopp?
Borussia Dortmund are at home to Paderborn on Saturday afternoon and all eyes will be on the home dugout after Jurgen Klopp revealed he will stand down as Dortmund coach at the end of the season.

• Can Hamburg beat the drop?
The only club to have played every season in the Bundesliga are currently bottom of the league, four points from safety with six games to go. Former coach Bruno Labbadia was reappointed on Wednesday and the escape plan begins with a trip to local rivals Werder Bremen on Sunday.

• Is Lazio’s run about to end?
Second-place Lazio visit league leaders Juventus on Saturday hoping to close the 12-point gap and equal a club record of nine consecutive wins.

• Who’ll be top dog in Milan?
Sunday’s Serie A game at San Siro may suggest mid-table mediocrity but there is still enormous pride at stake as Internazionale host Milan in the Derby della Madonnina.

• Can Valencia halt Barcelona’s title charge?
After throwing away a two-goal lead at Sevilla last weekend, Barcelona’s lead at the top of La Liga was cut to two points by rivals Real Madrid.

Luis Enrique’s side will be looking to return to winning ways on Saturday, but in opponents Valencia they face a potentially tricky encounter. Unbeaten in their last ten matches Nuno’s men have plenty to play for too, as they are engaged in a three-way battle with Sevilla and Atletico Madrid for the remaining two Champions League places.

• Could Algeria make it three out of three?
The first leg of the games to decide who makes the group stage of the African Champions League gets underway with three Algerian clubs in the mix: last year’s winners ES Setif, domestic champions USM Alger and MC Eulma, who only qualified in the first place because JS Kabylie were banned.

Victory at home to Heerenveen on Saturday will see PSV win the Eredivisie. Even if the club from Eindhoven don’t win, an Ajax loss at home to NAC Breda the following day would hand PSV the Dutch title.

On Saturday in Northern Ireland, Crusaders will win their first Irish Premiership title since 1997 if they take a point at home to Glentoran or Linfield drop any points at soon-to-be deposed champions Cliftonville.