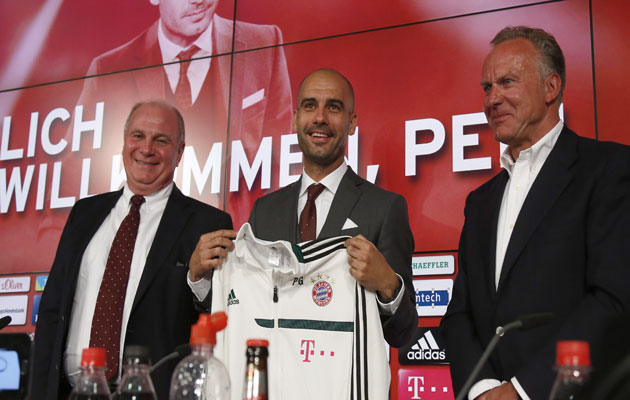 Guardiola’s future at Bayern has been the subject of speculation in recent months with some reprts suggesting he would be willing to walk away from the German champions-elect with 12 months still remaining on his contract.

Guardiola’s recent bust-up out with Bayern doctor Hans-Wilhelm Mueller Wohlfahrt heightened the spculation about his future.

But, following an emphatic 6-1 Champions League win over Porto which gave Bayern a 7-4 quarter-final aggregate, Rummenigge implied that a switch to Manchester City would represent a step down for Guardiola.

“I don’t worry about the rumour,” the German champions’ chairman told Bild. “It’s just proof of his quality.

“But I can’t imagine that Guardiola leaves for a club like Manchester City. I am sure that he will be team manager at Bayern at least until June 30, 2016.

“We are very proud that this coach is our man. He is the best and most sought-after coach in the world. He has satisfied all our expectations.

“We have a plan: We will bring this season to an end and then talk in the second half of 2015.

“Our goal is to extend his contract. And I think we have good chances that he will still be our coach beyond 2016.”