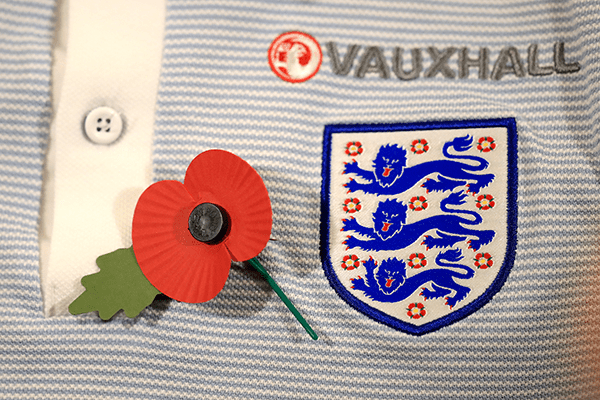 The FA has confirmed it will appeal against the fine imposed by Fifa after England players wore poppies on their shirt during the recent international match against Scotland at Wembley.

English football’s governing body was fined 45,000 Swiss francs (£35,300) by Fifa over the pre-match remembrance ceremonies and wearing of poppies at the World Cup qualifier.

“We note the decision by the Fifa disciplinary committee, which we intend to appeal. As a first step, we have written to Fifa requesting the grounds for the decision,” said the FA in a statement.

The Scottish FA received a fine of 20,000 Swiss francs for displaying the poppy on armbands, which were worn by both sets of players.

The English FA received a stiffer sanction for additional matters believed to include the display of flags with poppies by members of the armed forces and fans, showing the poppy on the Wembley big screens and placing T-shirts with poppies on supporters’ seats.

Fifa had warned in advance that displaying political symbols could be punishable but the FA and SFA went ahead with plans for players to wear poppies.

Fifa bans political symbols and has made clear it considers the poppy to be one. The home associations argued it was merely a symbol of remembrance for those who died in the two world wars.

Claudio Sulser, chairman of the Fifa disciplinary committee, said: “With these decisions, it is not our intention to judge or question specific commemorations as we fully respect the significance of such moments in the respective countries, each one of them with its own history and background.

“However, keeping in mind that the rules need to be applied in a neutral and fair manner across Fifa’s 211 member associations, the display, among others, of any political or religious symbol is strictly prohibited. In the stadium and on the pitch, there is only room for sport, nothing else.”