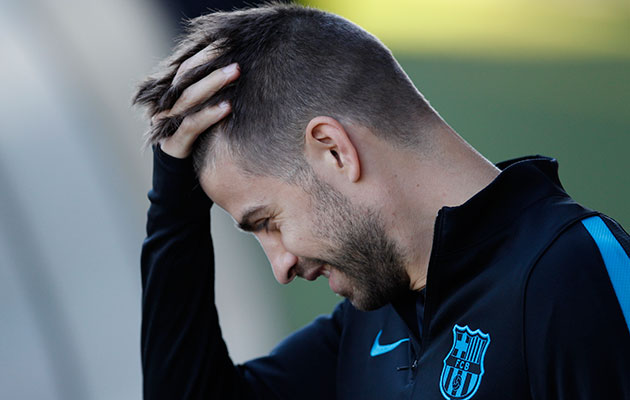 Espanyol supporters managed to smuggle a pig’s head into their Kings Cup tie against Barcelona on Wednesday.

The game was played at Espanyol’s Estadi Cornellà-El Prat stadium and the home fans intended to throw the pig’s head at Gerard Piqué, who had been critical of Espanyol supporters following an ill-tempered first leg meeting a week ago.

Pique mocked the Espanyol fans after just 28,975 fans turned up at the 40,500-capacity Estadio Cornella-El Prat for the league meeting between the two sides.

“They call themselves the ‘marvellous minority’, and they’re in such a minority that they can’t even fill their ground,” said the Spain defender.

“Let’s see whether they manage to fill it for the return leg, because the other day it wasn’t full.”

An attendance last night of 20,843, suggested they couldn’t.

A group of fans showed the pig’s head to a local radio journalist and claimed they wanted to recreate the incident in November 2002 when Barcelona fans threw a pig’s head at Luís Figo following his controversial move to Real Madrid.

The attempt to rile Pique was all to no avail as the defender remained on the bench throughout the game.

There were also several banners with offensive messages towards Shakira, Pique’s partner, and Suárez. Another sign read “Pau, your foot shows us the way” following the goalkeeper Pau López’s apparent stamp on Lionel Messi last week which infuriated the Ballon d’Or winner.

The game itself was just as heated on the pitch with Felipe Caicedo and Marc-André ter Stegen clashing and Álvaro González apparently elbowing Messi near the end of the game. Álvaro reportedly called the Barça forward “really short”, marking his height with his hand, to which Messi replied: “You’re really bad.”