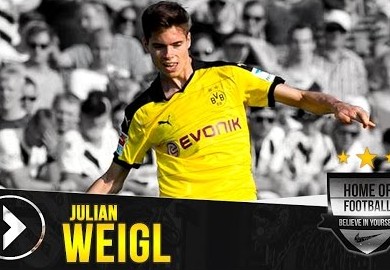 According to Sky Sports, Manchester City are set to make a move for Borussia Dortmund midfielder Julian Weigl.

Weigl has already made 19 appearances for Dortmund already this season and it was rumoured that Barcelona were interested in the 20-year-old.

To add some intrigue, out-going Bayern Munich manager Pep Guardiola was said to be interested in the highly rated youngster.

With Guardiola’s next managerial position being widely discussed, the signing of Weigl could add to the fire of Guardiola moving moving to Manchester City.

Weigl only joined Dortmund last summer after he came through the youth system at 1860 Munich and he signed a four-year deal at Westfalenstadion.