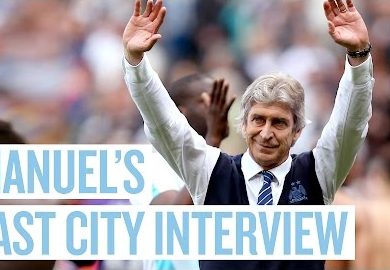 Out-going Manchester City manager Manuel Pellegrini is keen to stay in the Premier League after he leaves the club.

Pellegrini was emotional after City’s draw against Swansea and said that he will now assess his options.

“I will now starting thinking about the future,” Pellegrini said.

“I don’t want to decide just in one week. I will see different options.”

“I am fortunate to work in five countries,” he said.

He highlighted the attractiveness of the Premier League and said every manager should experience the brilliant atmosphere.

He continued: “The Premier League is the most important in the world. The stadiums are full capacity, a party every game, fans uniting and singing.

“The atmosphere. It is important for managers to have this experience.”

He also said that no words will be exchanged between himself and incoming manager Pep Guardiola.

“I don’t think that we need to speak,” said Pellegrini.

“He knows perfectly what is this club, he has friends inside here.

“He is a very important manager in Europe, so I am sure he will have all the information.

“So I think he will receive a club he deserves, and I am sure that this club will continue improving in the future.”