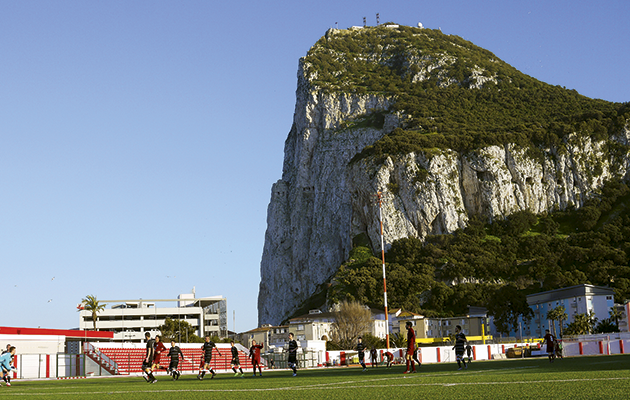 The result, which will be regarded as one of the biggest upsets in the history of European football, saw a team of amateurs defeat the first British team to win the European Cup.

Lee Casciaro’s 48th-minute strike gave the home side a famous 1-0 win on the night, although the Scottish champions still have next Wednesday’s second leg in Glasgow and will be expected to make it through to the final qualifying round.

The government’s chief minister Fabian Picardo said the win had come “against the odds” and showed the “true Gibraltarian spirit” of the British overseas territory with a population of just over 30,000.

“Tonight’s victory demonstrated true Gibraltarian spirit,” he said. “We might be small, we might be inexperienced at the international level, but we are not unnerved by our opponents’ reputation, nor by the odds against us.

“Without doubt this is the best result since we joined UEFA three years ago and we cannot wait for the return match in Scotland next week.”

Casciaro told Sky Sports: “It’s what people dream about since they are a young kid playing in Gibraltar – beating a big club like Celtic.

“Scoring the winning goal is something I will remember for the rest of my life. I scored for Gibraltar against Scotland but we lost 6-1. Today we won and it’s a major achievement for a small club like Lincoln and the whole of Gibraltar.

“This is like a hobby for us. We have a couple of professionals from Spain and a few locals. We train daily around two hours but combine it with the other things we do at the moment. It is surreal and we’ve done it today.”

Lincoln Red Imps have won 22 Gibraltar Premier Division titles since being formed in 1976 and have been champions for the last 14 years in succession.

<<Rock of Plenty: the story of football in Gibraltar>>

For new Celtic manager Brendan Rodgers in what was his first official match in charge, this was a humbling experience. Although, after the match, the former Liverpool boss, somewhat surprisingly, dismissed the idea that it was an embarrassment.

“No. There is obvious disappointment,” he said. “There is no embarrassment. It was a tough game in tough conditions. We didn’t take our chances, they took their chance.

“We dominated and created enough chances to score. Sometimes it can happen, obviously with the pitch, an awkward bounce and all of a sudden the player is in, it’s into the floor and goes in.

“Celtic fans expect us to get through into the group stages. It was disappointing but the players gave everything they had. The message to them is to stay calm. This is a good group of players, they are working hard and in a week’s time we will need them. I always thought this qualification phase would be based on the second leg at home, so we will need that support and hopefully get the job done next week.

Rodgers, without any trace of irony, was quick to point out that his players had dominated the match.

“They were never in command,” he continued. “We were the team with dominance. What we lacked was the final touch, the final ball. I’m not really shocked. I’ve been around the game often enough, I know these results can happen. We stay calm. We need to put in a performance next week. The result here complicates it a bit for us. We move on to next week.”