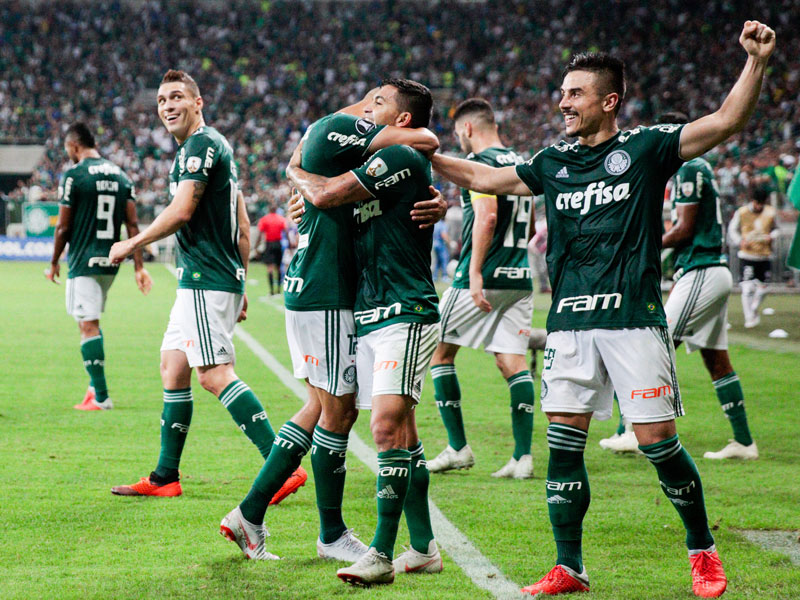 The domination of the big two is complete in the Copa Libertadores, South America’s Champions League.

Chile’s Colo Colo, the only outsider, were brushed aside with ease in the quarter finals. The final four, and seven of the last eight, are entirely drawn from Brazil and Argentina – Palmeiras and Gremio from the former, Boca Juniors and River Plate from the latter.

But there is another country in the mix. Palmeiras’ last goal in their 2-0 (4-0 aggregate) win over Colo Colo was a penalty emphatically slammed home by Miguel Borja, their Colombian centre forward. It was his 9th goal of the competition. A day earlier River Plate were facing away goals elimination at the hands of local rivals Independiente – until Colombian playmaker Juan Fernando Quintero danced through the defence to score. And just as memorable was the clinching strike by compatriot Rafael Santos Borre, who capped a fine centre forward display, full of dynamic movement, with a shot curled home from the edge of the area.

And the last quarter final tie also featured outstanding Colombian performances, this time for Boca Juniors. Defensive midfielder Wilmar Barrios was the man of the match in the first leg against Brazil’s Cruzeiro. And in the return match the Brazilians had real problems getting a grip on winger Sebastian Villa, a recent Boca acquisition who has started very well in his new surroundings.

And so if Brazil and Argentina are South America’s big two, Colombia have a strong claim to be considered the third force. This should also be clear from a glance at the Copa Sudamericana, the Europa League equivalent. The quarter finalists feature one team from Argentina, one from Uruguay, three from Brazil – and another three from Colombia.

Indeed, Colombia’s Atletico Nacional – with Miguel Borja shining – won the main prize, the Libertadores, as recently as 2016. In the final they overcame Independiente del Valle, a tiny side from Ecuador.

And so, just two years ago, the final of the continent’s showpiece competition did not even include a team from Brazil or Argentina – something which is already all but impossible to conceive.

The speed of the change is probably explained by alterations made to the tournament organisation. Previously the Libertadores was squeezed into the first half of the year. Now it runs from late January to the end of November. The longer the timescale, the greater the advantage of those with the means to maintain and renew a deep squad. Throw in the fact that more places were handed to clubs from Brazil and Argentina, and their domination has been quickly established. Last year they supplied three of the last four (and, in Gremio-Lanus, both of the finalists), and in 2018 they have done even better.

It is difficult to imagine a Libertadores without a strong Brazilian presence.  The country pays by some distance the highest salaries on the continent, and until this year its clubs had been under-performing for some time. More questionable is whether Argentina can continue to compete at this year’s level. The recent collapse of the Argentine currency, coupled with the fact that many of the clubs’ contracts are signed in dollars, is bound to have an impact. This year, backed by a new TV deal, the major Argentine clubs assembled deep squads – which they may not be able to maintain in 2019. There was a sign of the crisis last Thursday when Boca were unable to sell 1800 of their ticket allocation for the trip to Cruzeiro.

In the short term, though, there is the prospect of a thrilling climax to this year’s competition, in which 4 of the continent’s heavyweights duel on more or less equal terms.