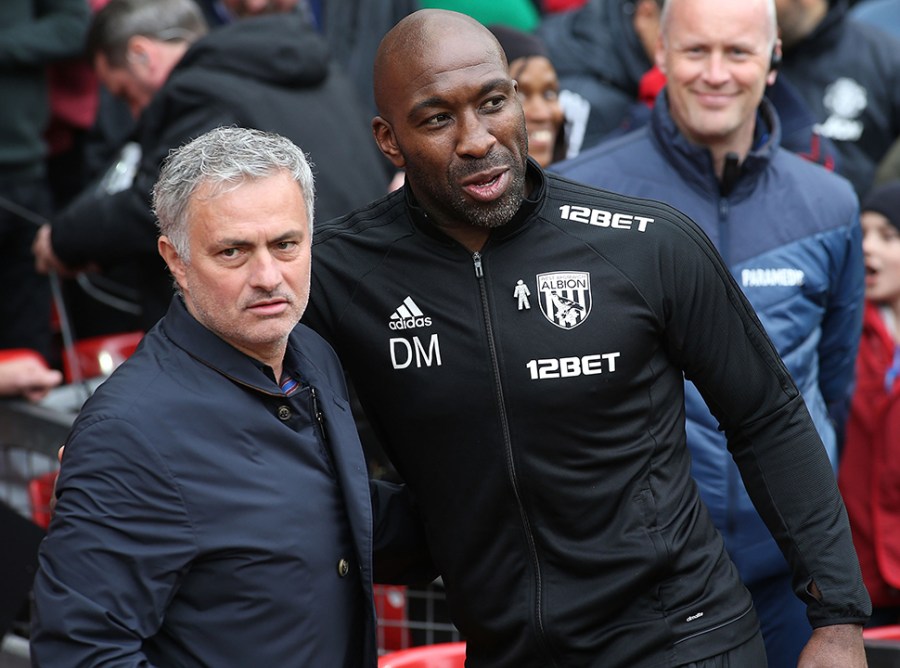 Would West Brom have survived with Moore in charge? | Brian Glanville

Soccer and surprise. The great ever unpredictable game. Who outside the purlieus of West Bromwich Albion themselves could ever have predicted their astonishing victory at Manchester United? Who themselves had just had the better of a Manchester City team which had waltzed away with the Premiership.

After a long and pitiful run of failure WBA, under the shrewd aegis of their coach and former player Darren Moore, frustrated and defeated a United team which had looked likely to bury them under a cascade of goals.

Under the highly experienced Alan Pardew, WBA had staggered from one disaster to another. But at Old Trafford in a 4-4-1-1 formation not merely solid and numerous in defence, with a goalkeeper in the veteran Foster who surpassed himself, but well able to counter punch. Dawson was not only a colossus in defence but a major threat when corners came over into the United box.

We are constantly reminded how sadly few are the black managers in League football but surely there is now a cast iron case for Moore to be appointed to the senior position. He has in just a couple of games abundantly proved what he can do. He knows the club and its players – though some of them may well be on their way come the summer. The choice should surely be automatic. You wonder whether WBA’s plight would have been so desperate had he been appointed weeks ago.

Gianni Infantino is a dominant not to say domineering President of FIFA. Back in May last year, he abruptly sacked the leaders of FIFA’s invetigatory and judiciary ethics bodies; Corel Borbely and Hans Joachim Eckert were ousted. The two marginalised men issued a pithy statement at the time. “The clearly politically motivated non re-appointment puts de facto an end to the reform efforts. It will further hurt the already tarnished image of FIFA.” Which indeed it did.

Now Infantino is hell bent on further expanding the already oversized World Cup finals. In putrescent little Qatar the South American federations are urging for it to be still more bloated.

Infantino himself seems to bear something of a charmed life. Last year he was reportedly being investigated for his use of private jets and for supposedly interfering in football elections in Africa. Charges which were not implemented.

This a shrewd and formidable operator. Opponents tend to fall by the wayside. Such as in 2016 a formidable opponent Domenico Scala, the chairman of the audit and compliance committee. Recent decisions appear to have been taken without the involvement of FIFA’s senior advisory committee.

As the World Cup finals approach, things gradually appear a little brighter for England. Not least in the re-emergence after injury of the towering midfielder Ruben Loftus-Cheek. Chelsea could not offer him a regular place so given that club’s erratic season you could say that Chelsea’s loss has been Crystal Palace’s gain.

On loan, one assumes Chelsea will want him back for next season though Palace would clearly want him to stay. But even if Chelsea were prepared to let him go, the transfer fee could well be beyond Palace’s means. On his impressive debut showing against Germany at Wembley, it is plain that Loftus Cheek emphatically has the so-called Big Match Temperament. As evidenced when he twice dramatically nutmegged two Germany opponents in succession. A very large young man with an admirably delicate touch.

It is a sad reflection on the diminishing status of British referees that not one of them will be going to the World Cup in Russia. Ironic and disappointing that one of the youngest senior English referee Michael Oliver should have emerged too late to be chosen, though on recent form he would prove surely a strong candidate for the subsequent World Cup.

When he officiated in the Real Madrid-Juventus second leg tie at the Bernabeu stadium, it looked as if, almost at the death, with Juventus winning 3-0 and thus on level terms after the first leg, Real merited that very late penalty. Juve’s Benatia looked plainly to have fouled Vazquez from behind.

Though harangued and crowded by outraged Juventus players, Oliver courageously gave the spot kick, from which Real scored and thus went through on aggregate. One of Oliver’s worse assailants who should certainly have known much better was the foul-mouthed veteran Italian keeper Gigi Buffon who truly disgraced himself. But the brave Oliver stood up to the abuse, stuck to his correct decision and Real Madrid squeezed through.