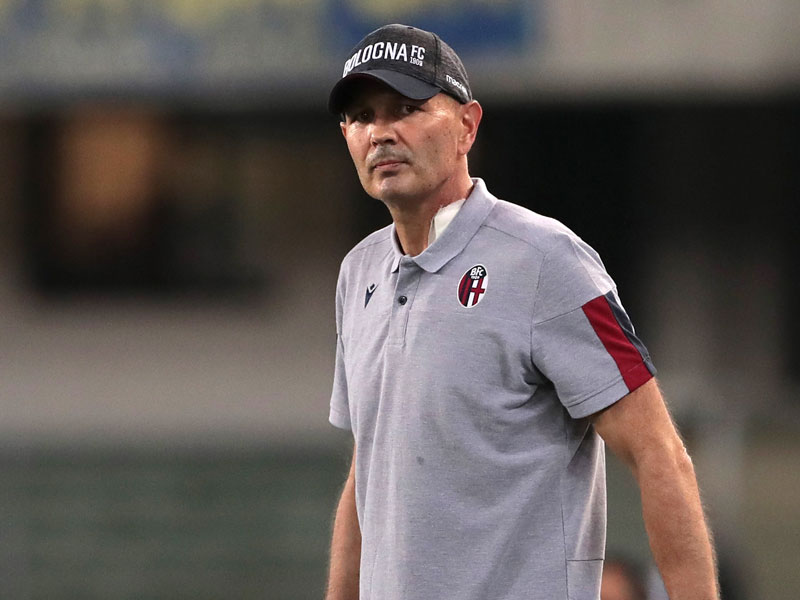 For once, it was not human prowess but rather human frailty which stole the headlines on Sunday’s opening weekend of the Serie A season. The season actually began, appropriately enough, with reigning champions Juventus defeating Parma 1-0 on Saturday evening.

Yet, it was Bologna’s Serb coach, Sinisa Mihajlovic, who scored perhaps the biggest “win” of the weekend, merely by turning up in Verona on Sunday night to sit on the bench for his side’s 1-1 away draw. The point about Mihajlovic is that the last time we heard from him was on July 13 when announced that he was suffering from leukaemia, adding that he would be going into hospital immediately to undergo chemotherapy.

At the time, Mihajlovic promised that he would be back in time for the seasonal start. Anyone who has had experience of the often devastating impact of chemotherapy had good reason to question that promise.

However, when the game kicked off, there he was on the Bologna bench. Looking 10 kilos lighter, frailer, older and clearly much reduced by the impact of his illness, Mihajlovic was greeted with a standing ovation not just by the Bentegodi stadium but also by the entire football movement.

After the game, Mihajlovic, who had been driven up from his Bologna hospital to Verona, returned immediately to the Sant’Orsola policlinico to continue his battle with cancer. In the past, Mihajlovic’s enthusiastic embrace of Serb nationalism made him an unpopular figure. However, it is hard not to admire the brave manner in which he has confronted his illness.

Juventus coach Maurizio Sarri is another man to have started the season under a health cloud since he is currently “grounded” by pneumonia. Like his colleague Mihajlovic, he has spent much time in recent days, coaching the Italian champions at a distance, thanks to digital camera images and constant mobile phone contact with his assistants.

Unlike the Serb, Sarri was unable to sit on the bench for Saturday’s game, although he is expected to return within two or three weeks. In his absence, though, his new team did the business, beating Parma 1-0, thanks to an opportunist goal from captain and veteran defender Giorgio Chiellini. Normal service has been immediately restored.

In truth, there was little new or Sarri induced about this winning Juventus. With the exception of ex-Chelsea Argentine, Gonzalo Higuain, up front, the team looked as if it had been selected by Sarri’s immediate predecessor, Massimiliano Allegri. There was little of the slick, one touch, fast attacking football that represents Sarri’s stock in trade.

However, there were moments in the first half when the champions were so dominant that they looked like they would completely overwhelm little Parma. Main man, CR7 Ronaldo looked both hungry and dangerous, Brazilian winger Douglas Costa looked like he wanted to immediately erase the memories of a less than happy or injury free 2018-2019 season whilst Higuain most effectively argued the case for a new Juventus contract with a performance which underlined his ability to play comfortably alongside Ronaldo.

On a hot August evening, with the temperature reaching 28° celsius, it came as no surprise that Juventus struggled in the second half against a busy, hard running Parma. In the end, the champions had plenty good reason to be happy with their three points, a point underlined when Parma’s Brazilian mdfielder Hernani flashed a well-struck free kick narrowly wide in time added-on.

Which was just as well because next up on Saturday night is Napoli who travel North to the Allianz stadium in Turin.   Following Napoli’s pyro- technic 4-3 defeat of Fiorentina, it was hard not to conclude that here we go again, with Juventus and Napoli by far the strongest two teams in the land.

That remains to be seen but there were certainly moments in Florence when Napoli looked mesmerisingly good with their “three musketeers”, Insigne, Mertens and Callejon capable of taking full advantage of the spaces left in defence by a distracted Fiorentina.

On the evidence of this game, too, it is not only Napoli who can look forward to another bright season. Fiorentina, who ended up last season in less than dignified style, avoiding the drop thanks to a “convenient”, mutually benefical, final day 0-0 draw with Genoa, looked much more like a side that could live up its best, top of the table history.

New Fiorentina players such as ex-Pescara striker, Riccardo Sottil, ex-Bologna midfielder, Chilean Erick Pulgar not to mention Ghanaian Kevin Prince Boateng (Barecelona), the latest arrival, Frenchman Franck Ribery (Bayern Munich) as well as last year’s reserve striker, Serb Dusan Vlahovic are all good reasons for the Fiorentina fans to be getting excited. All the more so, given that new owner, US billionaire Rocco Commisso, has managed to hold on to the most glittering jewel in the club armoury, namely striker Federica Chiesa.

It would not be Serie A if we did not have some opening day polemics.  These, too, were supplied by the Fiorentina v Napoli game where some of the refereeing decisions, especially with regard to the use or miuse of the VAR, caused no small stress.   Fiorentina were furious with referee Davide Massa for his decision to award a penalty to Napoli, two minutes before half-time.

In this incident, Napoli’s Belgian striker Dries Mertens appeared to be tripped in the box by Fiorentina midfielder Gaetano Castrovilli. On reviewing the action with the VAR, it seemed fairly clear to most observers that, in fact, Mertens had not been tripped but, rather, had taken a dive. How come neither referee spotted this one, asked Fiorentina boss, Vincenzo Montella, after the game.

Elsewhere, Lazio started well with a convincing 3-0 win away to Sampdoria, whilst Atalanta showed just why they qualified for the Champions League when coming from 2-0 down to defeat SPAL 2-3 away, thanks in particular to two splendid long range goals from Colombian Luis Muriel, signed from Fiorentina in the summer.

Only two biggies, AC Milan and AS Roma, made unsatisfactory starts, with Milan losing 1-0 away to Udinese and with Roma held to a 3-3 home draw by Genoa. For both these teams, though, better days beckon.

Final thought – with the fate of Inter’s Mauro Icardi, of Juve’s Paulo Dybala and doubtless of many others still hanging in the balance, one has to question the wisdom of a transfer market that closes only after the second day of the championship. Standby for last minute transfer action.