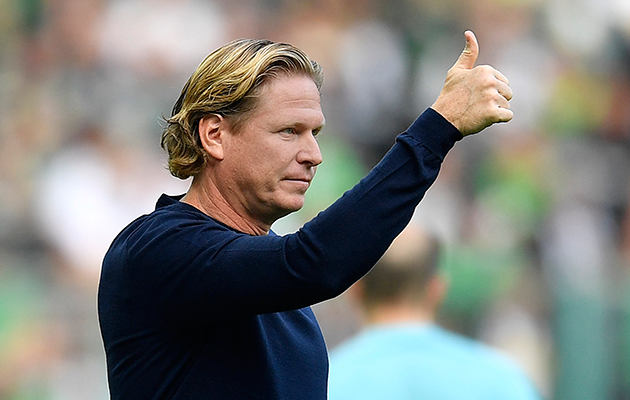 1. Hamburg horror
The powers-that-be at flatlining Hamburg will be wondering why they bothered sacking coach Bruno Labaddia last month.

Thus far, the three-match reign of new boss, Markus Gisdol has yielded only one point and the relegation storm clouds at the Volksparkstadion are, if anything, even more ominous.

In their 3-0 loss at home to Eintracht Frankfurt on Friday, the northerners were, to put it mildly, abject,  offering so little attacking threat that they had no shots on goal in the first-half and did not win a corner all game. No wonder HSV’s long-suffering fans were in  mutinous mood. A miserable haul of just two points from a possible 24 makes it Hamburg’s worst-ever start to a Bundesliga campaign and despite spending heavily on attacking-third reinforcements this summer – notably Serb winger, Filip Kostic, ex-Barcelona “Mini-Messi’, Alen Halilovic and US striker, Bobby Wood – they simply have no creativity or cutting edge, a state of affairs confirmed by their failure to score in their last half-dozen fixtures.

“I’ve discovered a totally insecure side,” declared Gisdol. “There’s no stability. What’s important is that the players take responsibility. They have to find the answers. As a coach, you can only take care of a portion of this.”

2. Look Who’s Talking Too
As quick to turn belligerent as Donald Trump, Leverkusen coach, Roger Schmidt, once more finds himself in the crosshairs of the authorities after being sent to the stands on Saturday for verbally abusing opposite number, Julian Nagelsmann, in a 3-0 home defeat.

The flashpoint came early in the second-half when Schmidt took exception to Nagelsmann complaining about foul play and thanks to the wonders of CIA-approved touchline microphones, we know exactly what the fourth official heard: “That was nothing. What kind of crackpot are you ? Shut your mouth.”

A ban is sure to follow. In February of this year, when refusing to go quietly on being sent off against Dortmund, Schmidt received a five-match technical area ban, with two of them suspended, and now in breach of his probation, will again have to keep his matchday distance.

Leverkusen,though, intend to stand behind their man, club director of sport, Rudi Völler insisting that they would not punish Schmidt.

“This was no big deal compared to what coaches sometimes call one another,” said Völler. “Such words often are overheard but when our coach is involved everybody jumps on it because of his past.” 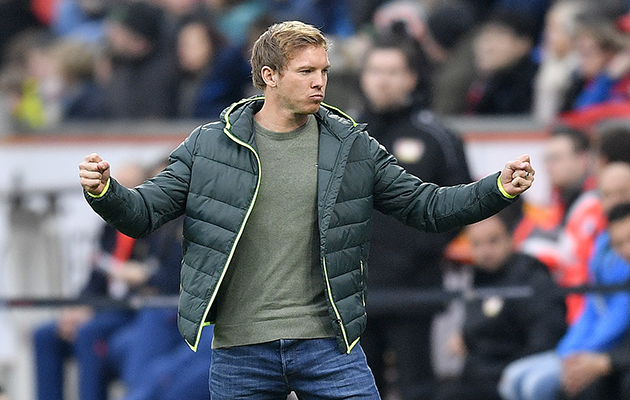 Putting aside the abuse he had to deal with in Leverkusen, it was an excellent weekend all round for baby-faced Hoffenheim coach, Julian Nagelsmann, at 29, the youngest trainer in the history of the Bundesliga.

Not only did he display ‘forgive and forget’ class in his reaction to Roger Schmidt aggressive tirade (“These things happen in the heat of the battle.”). He also had the satisfaction of seeing his side win their fourth game in row, the victory in the Rhineland propelling them into the domestic top-four. Now that’s what you call a turnaround. Relegation strugglers last term; unbeaten and upwardly mobile, just a few months later.

There’s so much to admire in Nagelmann’s relatively inexperienced group (boasting an average age of just 24.7 years).Their enthusiasm, will-to-win and mental resilience; the way they they keep their shape and their tactical flexibility.

Whether Nagelsmann uses a three or five-man defence, an attacking 4-3-3 or twin-striker approach, all runs like clockwork, with everyone sticking religiously to the plan.

All in all, a first class footballing set-up. A united and ambitious playing ensemble, a coach they are receptive to and little in the way of pressure from the boardroom. “We have to keep our feet on the ground,” says club owner, Dietmar Hopp. “I’d be happy with a place in mid-table.”

4. Hierarchy in flux
While the long-term aim of the intensely-ambitious RB Leipzig is to compete on an equal footing with the all-powerful Bayern Munich, the evidence of the current Bundesliga table is that the newly-promoted Saxon social climbers already are within touching distance of the Bavarian champs.

As a result of their 3-1 home victory over Bremen on Sunday, the Red Bull outfit are now in sole possession of second-place, just two points adrift of Bayern, and though RB are highly unlikely to mount a title challenge, a European qualifying spot is no pipe dream.

In a season when so many of the German big-hitters (Dortmund, Leverkusen, Gladbach, Schalke and Wolfsburg) are either inconsistent or in free-fall, the time is ripe for a surprise packet to leap into the upper echelon breach.

Step forward, the unbeaten Leipziger. Or the wonderfully well-organised Hertha Berlin, Köln and Hoffenheim. Suddenly teams worth more than the sum of their parts are in vogue. And the German game is all the better for it.

Yet still has some way to go to fully live up to the 30 million transfer fee Bayern shelled out for him in the summer. The 19-year-old whizz-kid has yet to start in the Champions League this season and in four Bundesliga starts, generally looked out of sorts. Imprecise in his passing, nervous of disposition and generally a far cry from his usual force of nature self.

Bayern’s Mr Pragmatic, coach Carlo Ancelotti, naturally will give him all the time he needs to become attuned to a new country and sporting environment. But it might be a long process. Because of his European Championship commitments, Sanches lost valuable pre-season settling in time and was further held back when forced to sit out the opening exchanges of 2016-17 with a thigh injury. Playing catch-up in a star-studded squad is never easy. Patience will have to be the order of the day for all concerned.