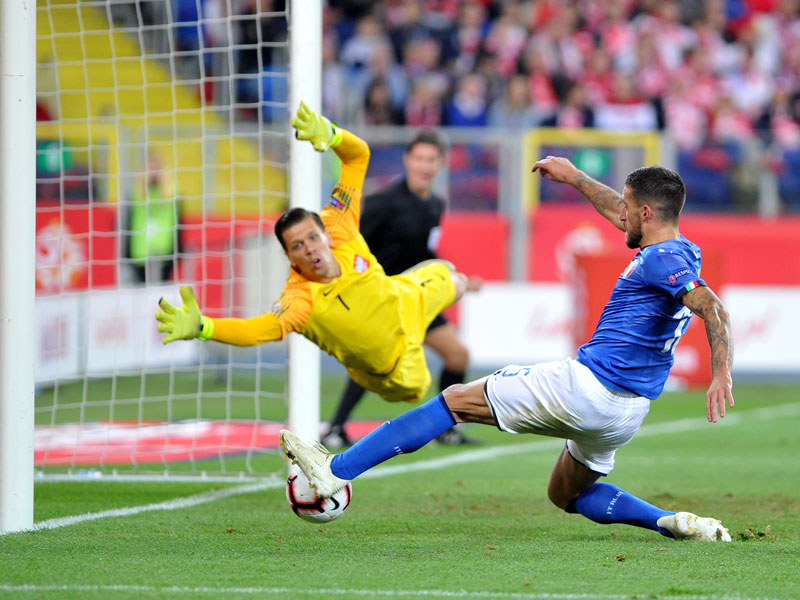 It may be premature to jump to hard and fast conclusions but it is difficult to resist the sensation that last weekend Roberto Mancini’s new-look Italy team turned a significant corner. 11 months after Italy‘s disasterous failure to qualify for the Russia World Cup finals, Sunday night’s 1-0 Nations League defeat of Poland in Chorzow would suggest that the tide is turning and that Mancini is on the way to building a seriously good team, one in keeping with Italy’s best traditions.
Given that Italy only won this game in the 92′ minute when the Fiorentina full back Cristiano Biraghi knocked in corner kick that had been headed across the Polish goalmouth by substitute Kevin Lasagna, you might object that such lavish praise is hardly merited. In truth, though, this was a one-way, lobsided affair in which after creating at least seven clear chances (including twice hitting the woodwork), Italy had only themselves to blame for not having had the game wrapped up long before that last gasp injury time winner.
The Italian celebrations which greeted that winning goal, with coach Mancini being ecstatically embraced by some of his players, were obviously an indication of relief at a deserved last minute win. An even bigger relief, however, was that of having avoided a draw which might have seen Italy “relegated” to Division Two in the Nations League (in their two previous Group games, Italy had drawn 1-1 at home to Poland and lost 1-0 away to Portugal) and thus exposed themselves to inevitably bitter media criticism.
Sunday night’s emphatic performance has, at least for the time being, silenced those who were already beginning to make critical noises about Mancini. That too, notwithstanding the fact that he has been in charge of the national team only since last May, having taken it over at an arguably all-time low point in its international standing.
[collection name=”small” accordion=”mobile” excerpt=8]
Those who were speculating about relegation last week are now arguing that this re-found Italy can win its final Group game against Portugal at the San Siro in Milan next month. In reality, though, it is time to keep all feet on the ground. Coach Mancini acknowledged as much when saying after Sunday’s game:
“I want to field a team which, home or away, goes out there to play with exactly the same attacking mentality. But you cannot do something like that in a short time. However, I have a squad of technically talented players and with them we can get there more quickly, they have the right mentality…”
In an obvious reference to his English Premiership title success in 2012 with Manchester City, Mancini also conceded that last-gasp wins are nothing new to him, saying:
“When you get a late winner like that, you are obviously going to celebrate that way…I still thought we could win…I won the Premiership in the fith minute of injury time, no one knows better than me that you have got to keep on believing right to the very end…”
In a game in which possession was 70-30 per cent in favour of Italy, it was hard not to agree with Mancini when he said afterwards that his side should have had at least “a couple of goals” long before stoppage time. His Italy, fashioned very much in his own image as a player with a clear predilection for mobility, skill and creativity, totally outplayed an admittedly subdued Poland. Not for nothing, Italy opened the game by hitting the cross bar in the first minute whilst they ended with that all vital late goal.
One significant aspect of this match was that Mancini started with exactly the same eleven as had started last week in a 1-1 friendly draw in Genoa against the Andriy Shevchenko coached Ukraine. In that game as on Sunday night, Italy had dominated for long periods but had failed to convert their dominance into goals.
Mancini, however, liked what he saw in Genoa and accordingly resisted any temptation to make further experiments, sticking with a front line of “little’uns but good’uns” in the shape of Federico Chiesa, Lorenzo Insigne and Federico Bernardeschi. In midfield, he picked not one but two playmakers in the persons of Italo-Brazilian Jorghino and Marco Verratti, flanked by Cagliari captain and international debutant, Nicolo Barella.
Both these gambles seem to work. Italy may lack an obvious central target man up front but the mobility and unpredictablity of the present attacking trio makes them very hard to contain. Likewise, the skill and technical control of the two playmakers saw them jointly dominate the game, very much thanks also to the all-round ability of Barella who was a pillar of midfield strength as he chased, covered and then got forward for Italy.
Again, these are early days but one would be hard pressed to name a more impressive international debutant in the last decade than Barella. Already a team leader at Cagliari, 21-year-old Barella seems destined for a huge career.
Back in Italy on Monday, coach Mancini and his squad were received at the Presidential palace by state President Sergio Matarella, in a ceremony marking the 120th anniversary of the foundation of the Italian football federation. As he arrived at the “Quirinale”, the Presidential Palace, Mancini said:
“To come here, to be received by the President is an emotion, much more so than yesterday’s win. That was a game of football and you can win it or lose it. It doesn’t happen that often that you come here (the Presidential palace).”
Who knows, however, that Mancini will not be back at the Palace to celebrate an important tournament win. Given the relatively untapped potential seen in the last week, this is not impossible. Stranger things have indeed happened.
Don’t forget to follow World Soccer on Facebook and Twitter.