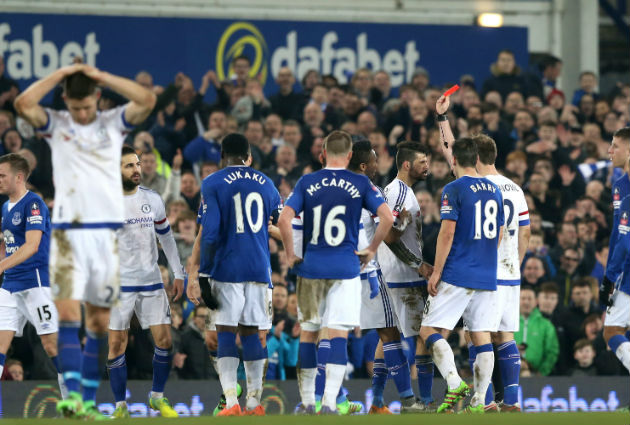 Diego Costa has been handed a one-game ban and fined £20,000 for his behaviour during Chelsea’s FA Cup sixth-round tie against Everton on March 12th.

The striker was warned about his future conduct after he admitted a charge of improper conduct. Costa is currently serving a two-match suspension and this ban will follow on immediately.

Costa was already ruled out for this weekend’s game versus Aston Villa – which Gabriel Agbonlahor will also miss following his behaviour in Dubai – and in addition, the Chelsea Striker will also miss the away fixture away to Swansea.

He will next be available to manager Guus Hiddink on April 19th for Chelsea’s home clash with Manchester City.

The suspension could pave the way for Alexandre Pato’s long-awaited debut for the Blues since moving in the January transfer window.

Guus reports that Pato will be involved in the squad tomorrow and the remaining eight games might be a time for some experimentation. #CFC

Regarding Pato’s involvement Hiddink said: “Whether he will be actively involved we will see tomorrow but we have now eight games coming up and there’s not much to win, to be honest, for Chelsea anymore.

“I don’t give any player a guarantee but there might be some time for experiments. He has worked very hard in the international break, along with the other strikers.

“When I started we had just Diego Costa [as a striker] and that was one of the reasons that Pato was coming on loan but, meanwhile, there was development for Traore, who progressed rather fast.

“Remy is coming back after injury and I try to make fair judgements as well. We have eight games to go and there might be some options.”