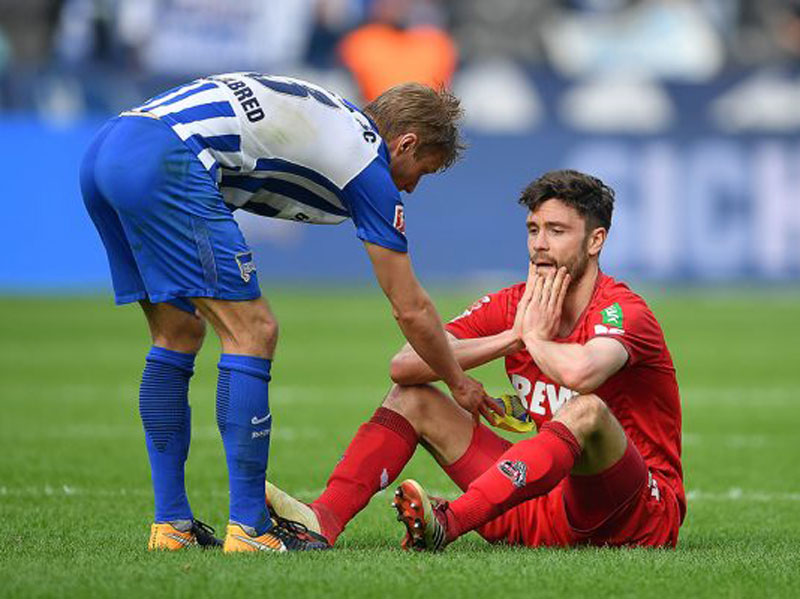 With his club Cologne on the brink of relegation from the Bundesliga, German international left-back Jonas Hector must have been tempted to jump ship at the end of the season. But in a rare example of principle and loyalty, has vowed to stay on, agreeing to a two-year contract extension which will take him through until 2023.

At a similar career crossroads, most modern-day professionals would be in ‘every man for himself’ mode, pushing others aside en route to the lifeboat. Not Hector. In these darkest of times for the Rhinelanders, he could not bring himself to break away.

“It was Cologne who made it possible for me to go from the regional league to the national team,” explained the 27-year-old, who joined the Billy Goats from fifth tier SV Auersmacher in 2010. “I’m very grateful to this club and have strong ties here. I’m very much at home in Cologne. It would have been easy to sign for another club this summer, but it just didn’t feel right.

“I’ve had lots of talks with the club and given it a great deal of thought. And for me, the conclusion was obvious. I belong here and along with the team and our fans, will be going all-out to make next season a success.”

Hector’s appreciation of the status quo will, of course, come at a price. Rumoured to be on the wish-list of Dortmund and a number of leading continental sides, he has turned his back on big, fat pay increase, the  prospect of Champions League football, not to mention all the other spin-offs which go hand-in-hand with elite competition.

Capped 36 times for Germany, his national team spot could be in jeopardy too. Second division players usually  are not deemed worthy of a call-up, though there have been a few exceptions to the rule: Koln attacker Lukas Podolski in 2004-05 and Gladbach frontrunner Oliver Neuville some three years later. In those instances, class told.

Following his heart is what Hector always has looked to do in his career. Until the age of 20, he was happy to play with  his friends for a village team in the Saarland region of western Germany and as a teenager, he not only turned down a place at the  Saarbrucken academy – the most important club in the area – but also rejected serious full-time offers from Hoffenheim, Stuttgart and Bochum.

“Everyone could see his talent, but here in Auersmacher, he had his family and friends and he never really planned to leave,” says Auersmacher board member Nils Mitrenga. “He’s a home-loving guy.”

1. Sancho is for real
England Under 19 left-winger Jadon Sancho certainly was full of beans in Dortmund’s 4-0 demolition of Leverkusen in a high-stakes, top-four clash, scoring one, making two others and generally running riot for the entire 90 minutes. Since joining the Schwarz-Gelben from Manchester City last summer, the teenager only has started four games in the Bundesliga, but on the evidence of the weekend, is far too good merely to be used in small doses.

2. Over and out for Forsberg
Arguably RB Leipzig’s most important player, Swedish attacking midfielder Emil Forsberg has kicked his last top-flight ball of the season. Sent-off for violent conduct in RB’s humiliating 5-2 home loss to Hoffenheim, Forsberg must now serve a three-match ban, which effectively means his Bundesliga 2017-18 race is run. After three years at RB, he may well have come to the end of the line in Saxony. The word is that he is Premier League-bound.