CR7 got himself onto the scoresheet just in time. As the reigning champions and current Serie A league leaders Juventus prepare to make their seasonal debut in the Champions League, the iconic Cristiano Ronaldo probably picked a perfect moment to get himself back onto the scoresheet, scoring both goals in Sunday’s 2-1 home win over Sassuolo.
Getting off the goalscoring mark is always important, even if you are one of the world’s best known goalscorers and even if you have been around all the tracks for the best part of the last 20 years. Speaking to Sky Italia, just minutes after the game, a beaming Ronaldo was the first to admit that the failure to score in his first three games for his new club had begun to weigh on him, saying:
“I really wanted to score…Of course, there was pressure on me after my move from Real Madrid. That is only normal after all that has gone down. However,  I knew that I was training well and that, sooner or later, I would get on the score sheet…I am very happy with this”
Ronaldo’s first official goal for Juventus will hardly rank as one of his all time greats. When Sassuolo defender Gian Marco Ferrari headed an attempted clearance onto his own post, CR7 was on hand to tap in the rebound from all of 15 inches. However, one thing leads to another and within a quarter of an hour, Ronaldo had scored his second Juventus goal. 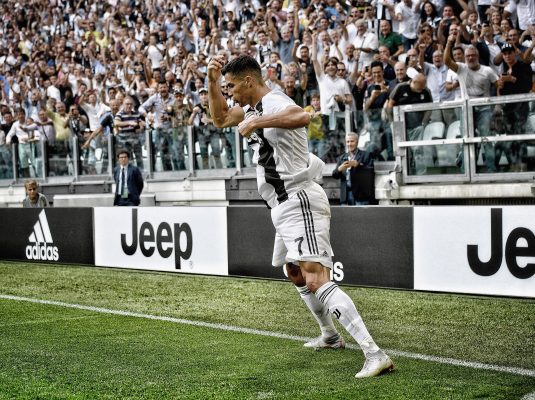 This one was much more trademark Ronaldo stuff, a goal scored on the counter attack after he had run the length of the pitch to pick up a perfect pass from Emre Can. He took it on the run, touched it once and then buried it in the corner of the net, way beyond goalkeeper Andrea Consigli’s reach, with a precise, low left foot shot.
Given that Ronaldo’s two goals came just hours before the Old Lady travels to Spain for a difficult opening Champions League Group H game, away to Valencia on Wednesday night, his timing could not be better. At the end of the day, we all know that the trophy that matters most to Juventus, even more this season than in other years, is the Champions League.
That is at least one reason why the club bought Ronaldo this summer. Thus, to have him firing on all cylinders and full of confidence will do no harm. On top of that, the fact that Valencia have yet to win a league game this season, having picked up three draws and one defeat in four games may make the Old Lady’s task easier.
In contrast, of course, Juventus are already out in front on their own in Serie A with four straight wins (against Chievo, Lazio, Parma and most recently Sassuolo).   After only four days, Juve are three points clear of their closest rivals, namely Napoli, with AS Roma already seven points behind and with the Milanese clubs, Milan and Inter, both already an embarassing eight points behind.
[collection name=”small” accordion=”mobile” excerpt=8]
Even now, with the league contest barely begun, the experts are shaking their heads gravely and suggesting that nothing can stop Juventus as they stomp on to an eighth consecutive title. It is a bit silly to be saying such things in September but what is true is that, such is Juve’s potential domestic dominance, they will be expected to put their best-ever foot forward in the Champions League.   As far as the Juve line-up is concerned tomorrow night, it seems very likley that such as Cancelo, Bonucci and Chiellini in defence, Pjanic (rested against Sassuolo), Matuidi and Khedira in midfield and Mandzukic, Douglas Costa and, of course, Ronaldo up front will all feature.
Even now, before the Champions League kicks off, it is hard to escape the sensation that, as in the last seven or eight seasons, Juventus will be the only really serious Italian candidate. Inter, due to face Tottenham Hotspur tonight in Group B, were hardly impressive in a 1-0 home defeat by born again Parma.
Likewise, AS Roma, who have arguably the hardest opening game of all four Italian clubs, away to holders Real Madrid tomorrow night, were also less than impressive in throwing away a 2-0 lead to draw 2-2 at home to Chievo on Sunday.
If there was to be an Italian dark horse, it might just be Napoli, coached this season by Carlo Ancelotti. In recent seasons, Napoli have often played well in the Champions League but generally crashed out when the pressure came on. Ancelotti’s Napoli may well play a lot less attractively than that of his predecessor, current Chelsea coach Maurizio Sarri, but they equally well may progress a deal further in the competition.
Many of us have long argued that, especially in the Champions, Napoli were found wanting psychologically not technically. With the monstrously experienced Ancelotti in charge, this may be about to change. Certainly, Saturday’s 1-0 home win against Fiorentina augurs well for tonight’s difficult Group C away game to Red Star Belgrade.
It is also true that the last time Italy started off with four teams in the Champions League, one of those four, namely Inter, won the trophy under the guideance of Special One José Mourinho, back in 2010. Could that prove a lucky omen for Italy this season?