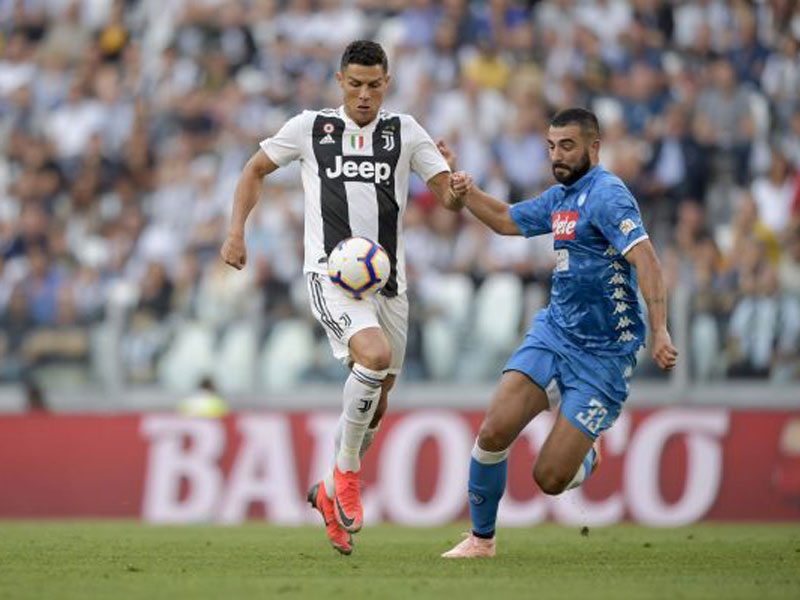 So, the Old Lady has already wrapped up her 35th Serie A title, has she? Following Juve’s 3-1 defeat of second placed Napoli in Turin on Saturday, commentators were moved to suggest, half in jest and half in earnest, that even at this early stage the Serie A title contest is as good as over.
With seven wins in her first seven games, the Old Lady is already six points clear of Napoli, eight clear of Inter, nine clear of Lazio and 10 clear of Roma. Before the curtain went up on this season, critics were already worried about the potential dominance of a Juventus squad that, even before the arrival of CR7 Ronaldo, looked by far the strongest in the land and good for an eighth consecutive title.
Given that with every game Ronaldo looks more and more a fundamental component in Juve’s winning schemes, that obvious prediction seem to be realising itself at the speed of light. Bought essentially to win the Champions League, Ronaldo has immediately demonstrated that he is much more than a mere sharpshooter.
[collection name=”small” accordion=”mobile” excerpt=8]
His performance against Napoli on Saturday was arguably his  best so far for the Italian champions, in that he had a decisive hand in setting up all three Juve goals. First he knocked in a perfect cross for Croat Mario Mandzukic to score Juve’s first with a (for him) simple header in the 20th minute. Then he repeated the trick early in the second half blasting a long range shot onto the post, setting up Mandzukic for a simple tap-in to put Juventus in front. Finally, in the 76th minute he knocked on a corner at the near post to set up defender Leonardo Bonucci for the third goal, a veritable knock-out punch.
All this, too, in a game which had seen a lively Napoli for the opening 20 minutes, a Napoli which even took the lead through its Belgian striker Dries Mertens in the 10th minute. The Napoli cause, of course, was fatally compromised by the 59th minute sending off of their Portughese left back Rui Costa. It is hard enough to have to face this Juventus at the Allianz Stadium but it is just about mission impossible to have to do so when you are down to 10 men for the last half hour. After the game, Napoli coach Carlo Ancelotti understandably refused to throw in the towel, just yet, saying:
“It was always possible that Napoli could lose in Turin, just as it is always possible that Juventus could get beaten in Naples. They are a bit in front of us at the moment but we have got to keep on growing, getting better. I am certain that we will prove competitive right to the end of the season, frankly today’s game proved that…”
It is debatable if Napoli’s “growth rate” is moving fast enough to ensure them a trouble free night at Anfield when they face the current Premier joint leaders, Liverpool, in the Champions League. Napoli,too, may have already compromised their Group C with a 0-0 away draw to Red Star Belgrade in an opening Group game in which they failed to translate their dominance into goals.
If they were to suffer another setback tomorrow  night, you could be forgiven for feeling that Napoli’s Champions League hoodoo of recent years shows no sign of relenting. As for his line-up, Ancelotti may well stick to the new 4-4-2 system he has used this season, in which the two men up front could well be Pole Arkady Milik and Lorenzo Insigne.
Juve, in contrast, would appear to have a much simpler task, at home to Swiss side Young Boys, beaten 3-0 by Man United in their first game.   Juve can probably even afford themselves the luxury of playing this one without CR7, who serves a one day suspension for having been sent off in Juve’s impressive, opening 2-0 win away to Valencia.
Italy’s other two Champions League contenders, AS Roma and Inter Milan, warmed up more than satisfactorily for their Champions League ties, against Czech side Viktoria Plzen and Dutch league leaders, PSV Eindhoven, respectively. If Inter’s 2-0 home win against Cagliari was hardly a surprise, the same cannot be said of Roma’s 3-1 win in their always keenly contested city derby against Lazio.
Coming on the heels of a convincing 4-0 home win against probably the weakest side in Serie A, namely Frosinone, the derby victory may yet put the Roma show on the road in the wake of some disappointing initial performances. These have included Serie A defeats by AC Milan and Bologna, as well as that seemingly inevitable 3-0 away defeat to Real Madrid in their first Champions League group game.
In theory, this could be a good week for the Italian clubs in the Champions League, with only Napoli, away to Liverpool, facing a truly prohibitive tie. Further down the line, with such as Real Madrid, Barcelona and Manchester United awaiting them, things will get tougher for the Italians.
In the meantime, time for one brief talking point. Namely, what to make of the Juventus decision to offload their highly successful managing director, Beppe Marotta, one of the architects of Juve’s current seven year long success story? Is this an indication that club President Andrea Agnelli will play an ever more dominant role in Juventus affairs? More of this anon…
Don’t forget to follow World Soccer on Facebook and Twitter.