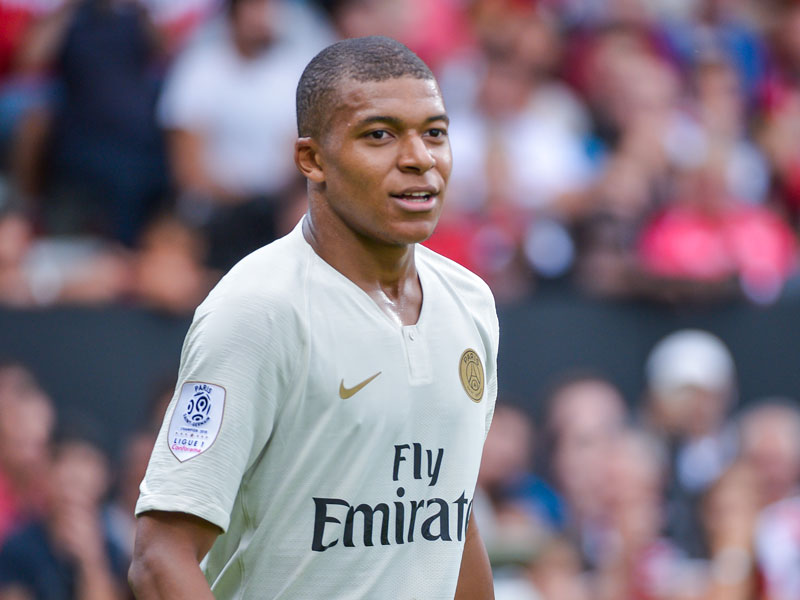 Welcome to our page dedicated to the young star Kylian Mbappe. Below is an article that features in our September 2018 issue and tracks the meteoric rise of the Paris-Saint Germain forward. Give it a read below.

Player Profile: Kylian Mbappe – The Boy With The World At His Feet

If you’re looking for the game’s current greatest overachiever, then look no further than Rafael Varane. Part of the France side that beat Croatia in Moscow in July, the 25-year-old added a World Cup-winner’s medal to an unbelievable haul of four Champions League gongs.

Yet despite Varane’s phenomenal success, he is nowhere near as feted or famous as his French team-mate Kylian Mbappe who, at the age of just 19, is undoubtedly the hottest property in world football today.

Mbappe may not have picked up as much silverware as Varane but no one can doubt that he has already won more hearts. Having made his senior international debut barely
18 months ago, the Paris-born striker is already the player every youngster dreams of being and every coach would love to sign.

His goal in the World Cup Final – a smart, right-foot drive beyond Croatia keeper and former Monaco team-mate Danijel Subasic – showed the world everything about Mbappe’s qualities. Receiving a pass from Lucas Hernandez 25 yards from goal, he took the ball side on and then swivelled quickly, shifting the ball wider to create space away from defender Domagoj Vida before rifling a shot low into the left-hand corner of the net. Everything was done neatly, tidily and brilliantly, with minimum fuss and maximum efficiency. 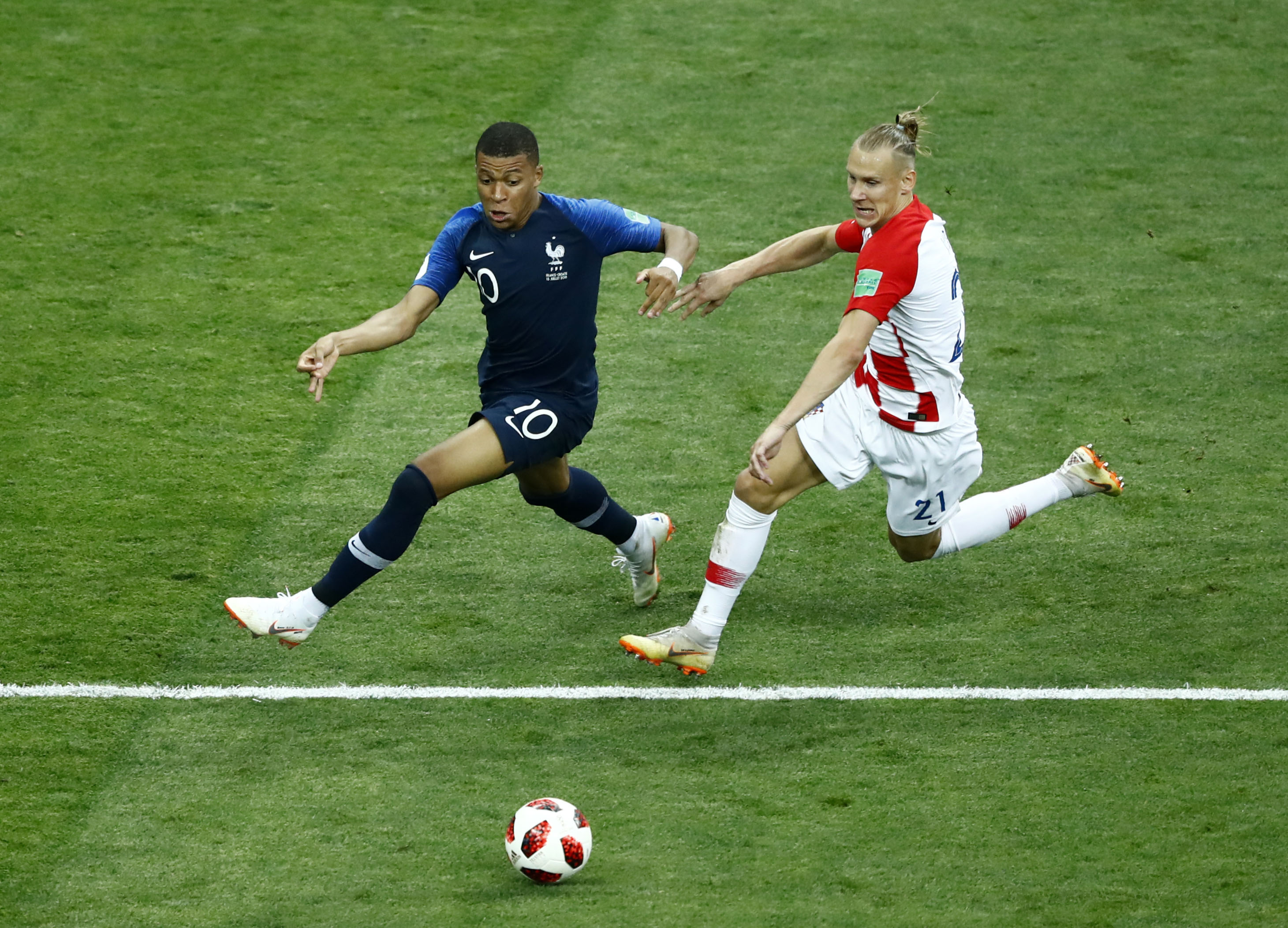 Given the amount of talent at French boss Didier Deschamp’s disposal, the fact that Mbappe started all seven World Cup games, scoring four goals, shows the esteem in which the coach – who has now won the World Cup both as a player and as a boss – holds the Paris Saint-Germain forward.

Watching Mbappe annihilate an experienced Argentina defence in France’s first match of the knockout phase, a game in which he scored two goals, was one of the highlights of the tournament. His electric pace caused the South Americans all sorts of problems and earned France their opening goal when a scintillating break from within his own half – timed at an astonishing 37 kilometres per hour – saw Mbappe unceremoniously hauled down in the penalty area by Marcos Rojo for a spot kick that was duly converted by Antoine Griezmann.

Former England defender Rio Ferdinand joked that Mbappe’s pace was “illegal” and claimed the only thing to do when facing him is to pray.

“Against Belgium the rest of us were still getting warmed up,” explained Griezmann. “But after just 20 seconds ‘Kiki’ [as Kylian is nicknamed] was already turning on the afterburners. He’s the only one who can do that.” But Mbappe is not just a speedster.

For one so young his all-round game has a maturity that even top-level pros find astonishing. “Kylian has much more talent than I have,” says French midfielder Paul Pogba. “Have you seen what he can do at his age? I never had that level of ability.”

This is praise indeed for a youngster with the world at his feet. But despite his tender age, Mbappe seems to handle the pressure of the world’s spotlight shining on him with an incredible maturity. Much of the credit for this must go to his parents, who’ve always kept a watchful eye on the progress of their prodigy. It surely helps that both his mother and father have some personal understanding of the world of high-level sport.

Kylian’s Cameroonian dad, Wilfried Mbappe Lottin, played regional football in France before becoming coach of the under-15 side at AS Bondy, a club situated in a suburb to the northeast of Paris. Born in Algeria, his mum, Fayza Lamari, was a top-level handball player at the same club. Dad now acts as Kylian’s agent with the help of a Parisian law firm, Verheyden & Cognard.

“He’s got good people around him,” says former Cameroon international Patrick Mboma, who played with Kylian’s dad at Bondy. “His parents both love sport and always look to do what’s best for their son.”

As for the youngster himself, he admits: “It’s no secret that you need a solid family behind you if you want to succeed at the very highest level.” It’s perhaps a good thing that both parents have always kept a watchful eye on their son. Never a tearaway, Kylian was nevertheless a little too lively for his own good at school. At the age of 12 one of his teachers recalls the youngster getting eight written warnings in just eight hours of lessons. “But he was such a nice kid that I made sure he wasn’t expelled,” recalls his French teacher, Nicole Lefevre. 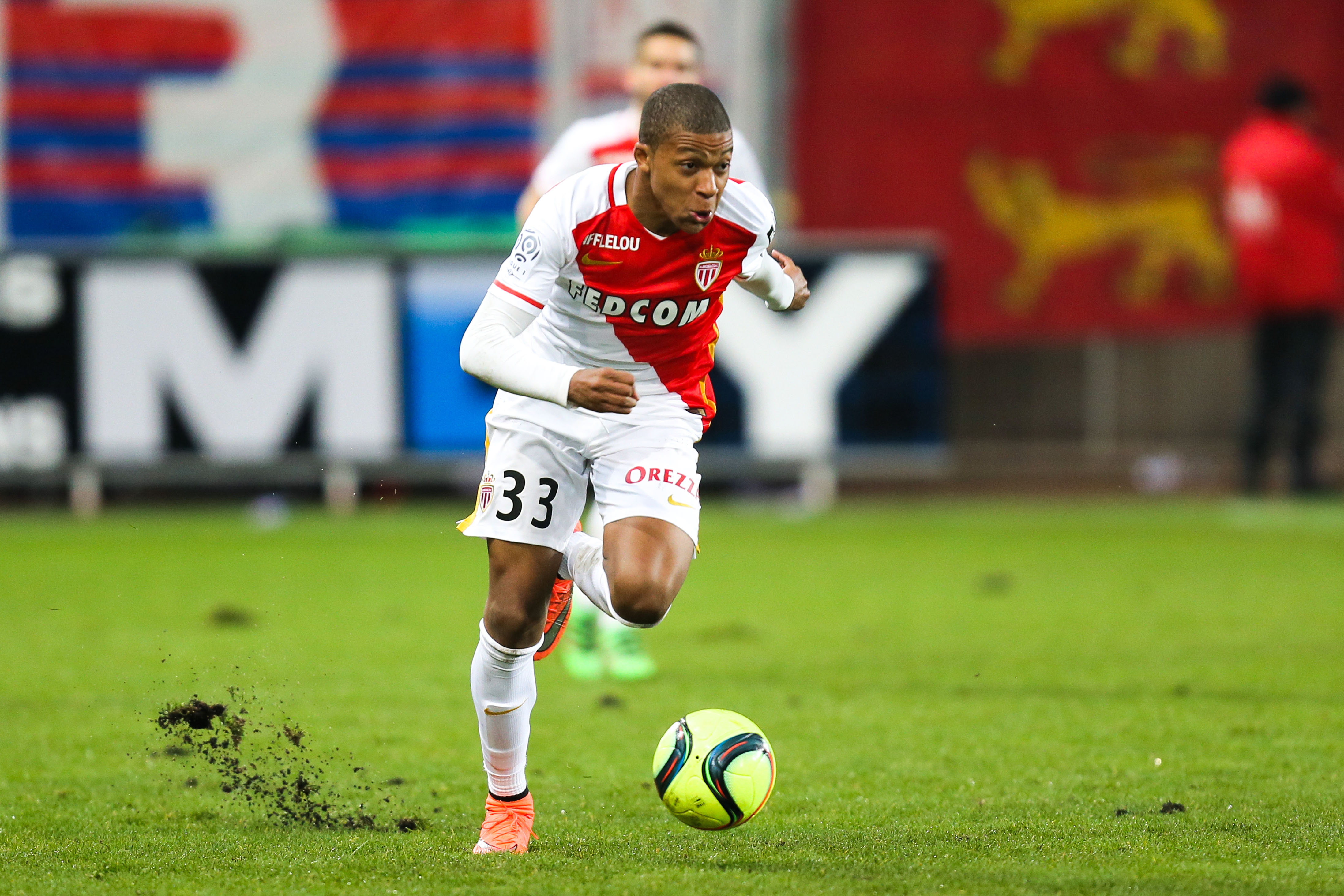 It must have been hard for the youngster to keep his feet on the ground, though. Having signed with AS Bondy at the age of nine, his prodigious talent was soon recognised. “From an early age Kylian was phenomenal, a meteorite,” says the club’s president, Atmane Airouche. “His pace and vision were incredible.”

Europe’s biggest clubs were quick to show interest in the youngster and Mbappe even went to London to play in a trial match for Chelsea at the age of 11.

“We played a friendly against Charlton Athletic,” he recalls. “It was my first experience abroad and a chance to see what the game was like in England.” In 2011 Kylian Mbappe was selected to attend the respected National Institute of Football at Clairfontaine for two years, where he was courted by Caen, Monaco, Bordeaux, Paris Saint-Germain and Real Madrid, and for a long time it looked as if Caen would get his signature.

But in 2013 the 14-year-old signed for Monaco and joined the academy just as the Principality club was promoted back to the top flight of French football. Mbappe’s progress at Monaco was nothing short of remarkable. Having been selected for the French under-17 side in September 2014, he was scoring his first goals for Monaco’s reserve side just over a year later.

Throughout his remarkable footballing ascendancy, however, he was still obliged to continue with his schooling, earning his baccalaureat in business management in September 2016.

Mbappe made his first-team debut at the end of 2015 in a 1-1 draw against Caen, coming off the bench to replace Fabio Coentrao in the 88th minute and becoming the youngest player ever to wear the Monaco shirt in Ligue 1, aged 16 years and 11 months.

He took the record previously held by Thierry Henry – and it wasn’t long before the new kid on the block had stolen another of the future Arsenal star’s records, this time for the youngest player to score a league goal for Monaco, when he netted in extra time against Troyes. And all of this was before Mbappe had even signed his first professional contract.

Mbappe also helped Monaco’s under-19s win the prestigious Gambardella Cup in the summer of 2016, scoring two goals against Lens, and then picked up the European Under-19 Championship with France. Such was Mbappe’s impact that Manchester City offered Monaco €40m for him that summer, a bid that was immediately rejected. In February 2017 he showed City exactly what they were missing when he scored against them in the Champions League.

The 2016-17 season proved to be unforgettable for both Mbappe and Monaco as the club pipped Paris Saint-Germain to the Ligue 1 title. He scored 15 league goals and an impressive further five in the Champions League. 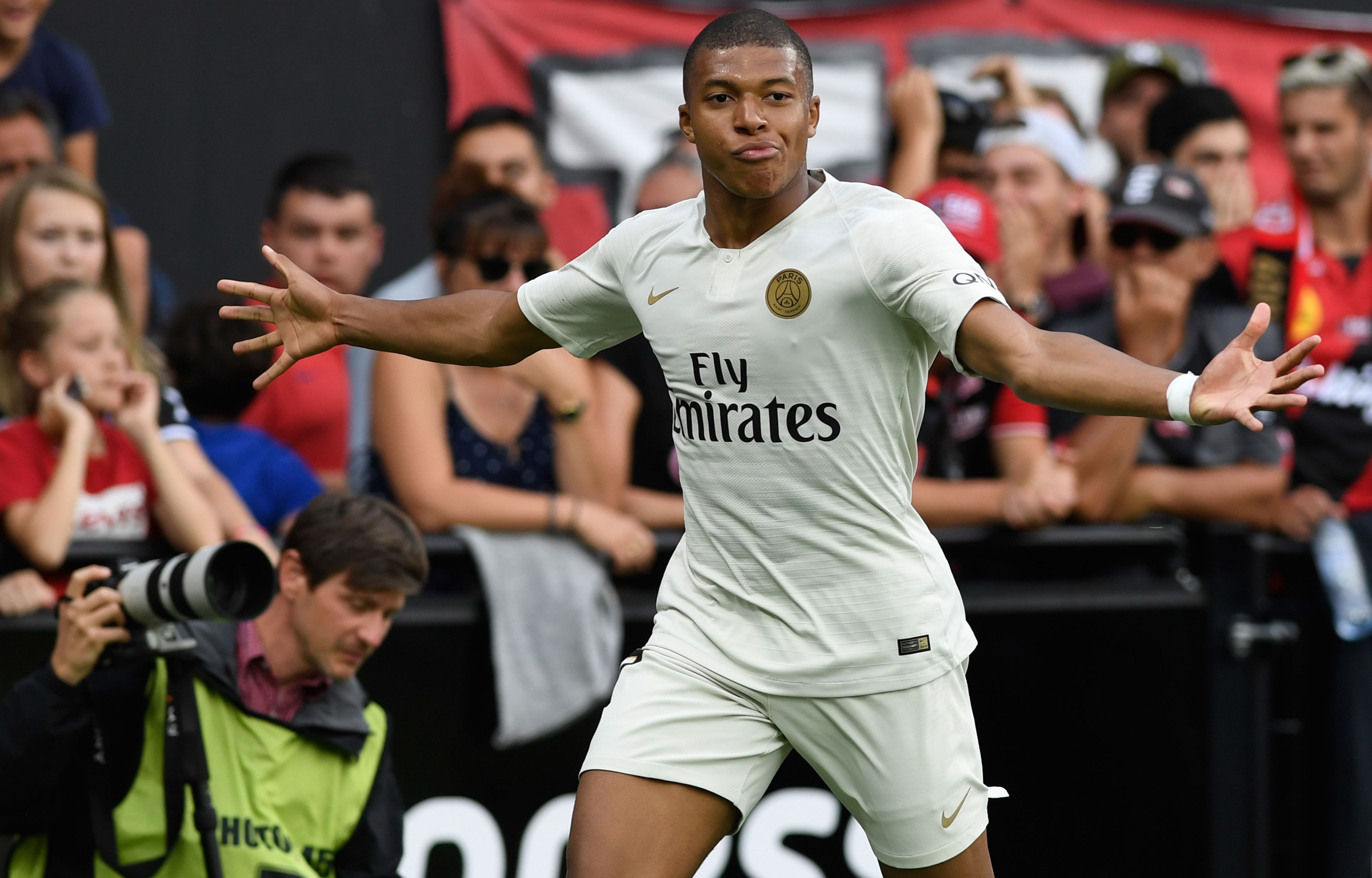 In a Monaco team blessed with prodigious talent such as Bernardo Silva, Fabinho, Thomas Lemar, Radamel Falcao and Benjamin Mendy, he nonetheless cemented his reputation as the most exciting talent of them all.

Deschamps gave him his first full international cap when he brought him off the bench in a World Cup qualifier away against Luxembourg in March 2017 and Mbappe went on to make 10 appearances in total during the rest of the calendar year, scoring his first international goal in a 4-0 win against Holland in another qualifier.

Speculation surrounding a potential move for the 18-year-old reached fever pitch in the summer of 2017, and on the last day of the French transfer window it was announced that he would join PSG.

The deal was an interesting one, with the player signing for the capital club on a year’s loan with an option to buy and a price set at an eye-watering €145m, plus add-ons. The purchase would be obligatory if PSG maintained top-flight status and would make him the second-most expensive player in football history.

“It’s a dream for me to sign for PSG,” said Mbappe after the deal was done. “The team plays attacking football and signing here also means I can come back to Paris where I was born and where I grew up. PSG is the place where I can both progress on a personal level and win trophies.”

The year ended on a personal high as Mbappe came seventh in the voting for the Ballon d’Or – the youngest player ever to make the top 10. Not only that, his 33rd goal of the calendar year earned him the title of top French goalscorer of the year.

If 2017 was the year of personal achievement, then 2018 proved to be the year when his teams reaped rich rewards. PSG claimed the League Cup with a 3-0 victory over Mbappe’s previous team, Monaco, in which he was named man of the match. He also picked up a second Ligue 1 winner’s medal and played in the PSG side that won the French Cup. Not bad for a first season back in his hometown.

Of course, all of these impressive achievements were then eclipsed by the exploits of the French national side as they brought home a second World Cup from Russia.
Almost inevitably, Kylian Mbappe was named the best young player in the tournament.

“I can’t describe how proud I am to have won the World Cup,” he said. “I’ve realised a boyhood dream and to have made the entire French nation so happy? Well, I can’t put a price on that.” 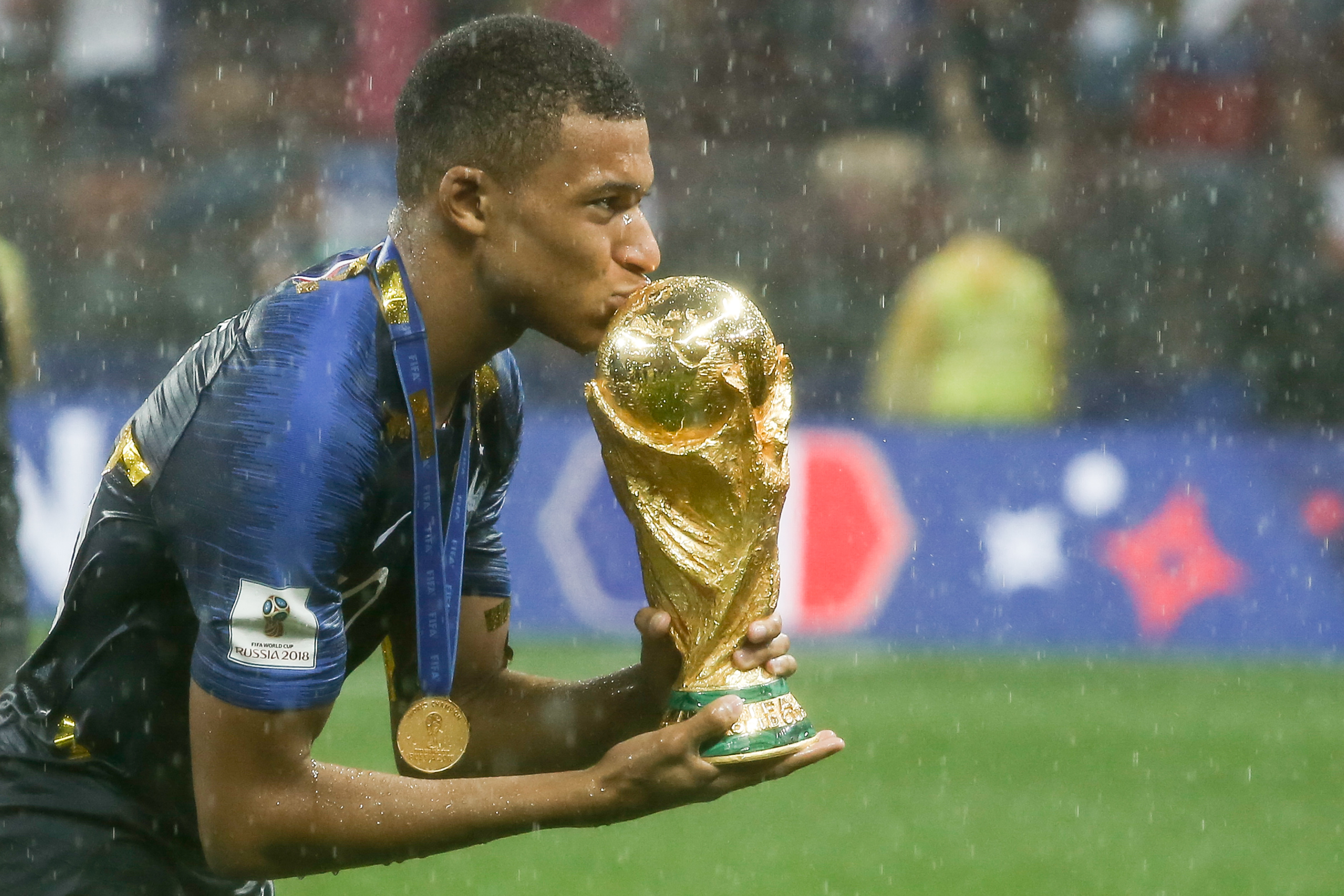 Mbappe winning the World Cup with France in 2018 (Getty Images)

Kylian Mbappe has instantly become the symbol of a new French spirit: young, dynamic, unafraid. The country’s president, Emmanuel Macron, was clearly moved by the World Cup victory, and by Mbappe in particular – so much so that Macron instinctively kissed the youngster on the head when he was part of the official delegation that presented the trophy to the team in Moscow.

“Before we left for Russia he asked us to bring back a second star for France,” laughs Mbappe. “Well, we ended up bringing the trophy back and taking it to his office, so I think we did OK.”

Mbappe’s short career really is the stuff of fairy tales for one so young. But there are still plenty of targets for this most special of players. Winning the Champions League with his club and a European Championship with his country, for starters. And then there’s the challenge of winning individual honours as World Player of the Year.

With the era of Cristiano Ronaldo and Lionel Messi drawing to a close, it’s not at all beyond the realms of possibility that this young, amiable and unassuming Frenchman might get his hands on that accolade sooner rather than later.

He may be called “Donatello” by his team-mates because of his resemblance to the Teenage Mutant Ninja Turtle, but surely he is much more like another cartoon hero: Superman.