Welcome to our page dedicated to mercurial talent, Jack Wilshere. Prone to injury, Wilshere has recently announced he will be moving to West Ham after falling out of favour at Arsenal. Take a look at this Talent Scout post from our September 2009 issue.

Shockingly, Jack Wilshere was omitted from the 2018 World Cup squad.

Jack Wilshere has recently moved to West Ham on a three-year deal.

“I’ve got good memories of my childhood supporting West Ham, watching them at Upton Park,” he said.

“It feels good and of course my family and a few of my friends are West Ham fans so everyone’s buzzing.”

They certainly know how to wean sporting excellence in the Hertfordshire town of Stevenage, 30 miles north of London. Quite incredibly for a conurbation of just 79,000 souls, it is the birthplace of not only reigning Formula 1 world champion Lewis Hamilton and top golfer Ian Poulter, but also a pair of England’s finest footballing prospects: Aston Villa attacker Ashley Young and Arsenal’s Jack Wilshere, the brilliant teenage midfielder who seems on the cusp of a memorable career.

Too much media attention and hysteria can derail even the most level-headed young player. But it is truly hard to not to praise 17-year-old Wilshere to the heavens. Whether starring for the Gunners’ FA Youth Cup winners last season or in his rationed first-team appearances – Arsene Wenger has mainly restricted him to League Cup and friendly action – the extravagantly gifted left-footer invariably leaves the observer mesmerised by his multicoloured palette of skills, exuberance and fearlessness. The kid is a natural. 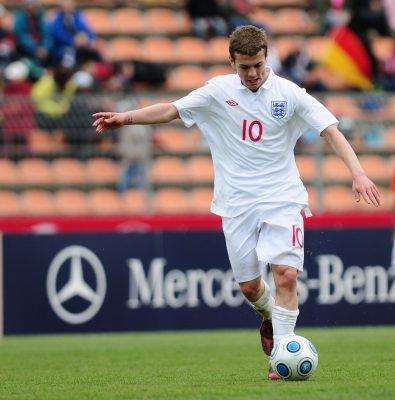 Lion: There was a lot of hype around Wilshere and the England set-up (Getty Images)

Equally at home in the hole behind the strikers or out wide, Wilshere is at his most potent running with the ball. Small and rather slight, he is perfectly balanced and easily able to accelerate away when defenders close in. He punches holes in a rearguard with the swagger of a matador teasing the bull.

Some believe Wilshere in full stride harks back to Paul Gascoigne at the height of his powers; others argue he is worth more than Gazza reincarnated. Some even say there is more than a hint of Diego Maradona about him and comparisons do not come any more flattering than this.

Since his eye-catching Emirates Cup performances this summer against Atletico Madrid and Rangers, many in the UK media are pushing his claims for a pace in England’s squad for next year’s World Cup finals.

Wenger has likened his steely self-confidence to that of Wayne Rooney when he first exploded on to the scene and England manager Fabio Capello, not normally one to dish up second helpings of approbation, clearly likes what he sees and has said: “It’s not normal to be so young and so good.“

Yet for all his undoubted talent, talk of World Cups has to be premature. Up until this season Wilshere had clocked up just six minutes of action in the English top flight, appearing as a late substitute at Blackburn in September 2008 to become, at 16 years and 256 days, Arsenal’s youngest debutant. 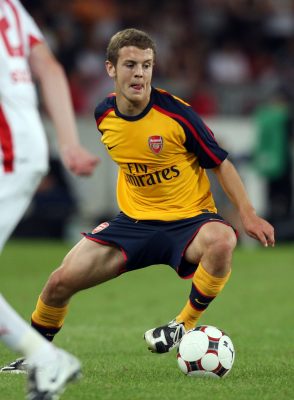 Promise: Wilshere’s talent was clear to see when he was a youngster (Getty Images)

Obviously he still has much to learn and the likelihood is that Wenger will continue to use him in short, sharp bursts. Careful nurturing has to be the order of the day.

The emergence of Wilshere is a highly significant moment for Arsenal. At the club’s academy since the age of nine, he is not just proof positive that their youth system works, he also serves as the counter-argument to those who believe Wenger is only interested in ability from overseas. In Wilshere, Rhys Murphy, Kieran Gibbs, Sanchez Watt, Emmanuel Frimpong and others, Arsenal’s rising generation has a strong Anglo flavour and that has to be a positive for the club – and England.