Mancini Gets Down To Serious Business | Paddy Agnew

Paddy Agnew’s Notes From Italy: Mancini Gets Down To Serious Business

“I’ve stopped going to Ikea…”
As Italy prepare for competitive, three-points-that-matter action with a UEFA Nations League game against Poland in Bologna on Friday, it was left to Gian Piero Ventura to provide the above, ironic quote. Ventura, of course, is the man who last November coached Italy to what was arguably their worst international result in almost 60 years when his side were eliminated from this summer’s World Cup finals in Russia by Sweden no less. Hence, Ventura’s lack of enthusiasm for the famous Swedish home accessories multinational.
After watching from the sidelines for the last 10 months, the Italian national team under new coach Roberto Mancini finally gets back into “serious” action.   At a news conference at the Federal Training Centre of Coverciano, Florence, Mancini on Monday suggested that the new UEFA competition, the Nations League, is “better than playing friendlies”.
Related: How Do You Win The UEFA Nations League?
He clearly has a point since the Nations League, apart from being a competition in its own right, also offers four places at the Euro 2020 pan-European (in 12 different European cities) finals. So these games do matter. However, if you are not one of the four winners here, you can still make it to the Euro 2020 finals by the traditional group qualifying process for which the draw is due in Dublin later this month.
Mancini, though, is right to insist on the three-points-that-matter aspect. He has a long and winding road in front of him as he plots Italy’s difficult path back to the high-table of European soccer. Serious competition of the type offered by Italy’s two mini-group opponents, Poland and Portugal, will give him and his new, younger squad plenty of headaches.
[collection name=”small” accordion=”mobile” excerpt=8]
At World Soccer, we have already signalled that former Inter and Man City coach, Mancini intends to turn over a new leaf with the national team. Keen to underline the point, Mancini sprang a surprise by calling-up AS Roma’s uncapped 19-year-old Nicolo Zaniolo, a player who has never played in Serie A but who illustrated his quality with some useful performances for the Italy U19 team which lost this summer’s UEFA U19 Championship final in Finland, beaten 4-3 by Portugal.
Even if there are familiar names in this squad such as Leonardo Bonucci and Giorgio Chiellini in defence or Mario Balottelli, Ciro Immobile and Lorenzo Insigne in attack, this is still a squad which features a host of relatively inexperienced players. In the squad are younger players such as 24-year-old Cagliari goalkeeper Alessio Cragno, 26-year-old Fiorentina defender Cristiano Biraghi, 21-year-old Cagliari midfielder Nicolo Barella and 23-year-old Fiorentina midfielder, Marco Benassi, all uncapped. Furthermore, two players likely to play are the Roma midfielders, five times capped, 23-year-old Bryan Cristante and six times capped 22-year-old Lorenzo Pellegrini. 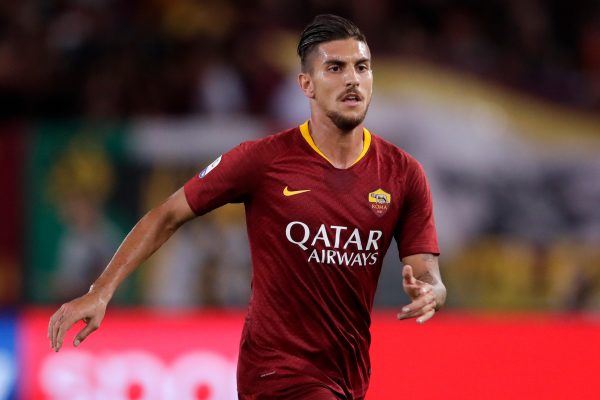 Not for nothing, Mancini began his international week with a familiar complaint, namely the difficulty for players such as the above to get playing space in a league championship that imports plenty of foreigners. The first three days of Serie A would seem to make the point because, according to Transfermarket, 60% of the players in Serie A action so far this season were foreigners, in others words 216 foreigners and 142 Italians. Mancini commented:
“There have never been so few Italians (playing), so we’ve got to go looking for them and for that reason we have summoned younger players, to have a look at them and see what they can offer us for the future…
“Some of our youngers players on the bench are better than some of the foreigners out there on the pitch…Pellegrini is on the bench at the moment, Cristante is not playing much. You would just hope that they will get to play more as the season progresses. In other leagues, young players get to play and no one creates problems if they make mistakes and then, after 10 games, they’re part of the first team…”
Inevitably, though, Mancini’s side against Poland in Bologna will obviously be a mix of old and new, experienced and less experienced. Gigi Donnarumma in goal, Bonucci, Chiellini and Domenico Criscito in defence, Balotelli and Lorenzo Insigne in attack are likely to play in a side that could also feature both Cristante and Pellegrini in midfield.
When it comes to the second of the forthcoming games, against European champions Portugal in Lisbon, Mancini will probably be happy to hear that the Man Himself, CR7, will not be available. Given a seasonal start which sees him scoreless after three games for his new club Juventus, Ronaldo has opted to stay in Turin. In all probability, Ronaldo’s concerns are much more about his overall level of fitness (which in reality has so far looked good) than about his sharpshooting skills.
Even without CR7, however, Portugal are likely to provide a serious, prestige test for the new look Italy. The good thing about a poor result, of course, is that defeat in the Nations League compromises nothing as far as Euro 2020 is concerned. So then, once more unto the breach, Italia.
Probable Italian line-up v Poland:
(4-3-3): Donnarumma; Zappacosta, Bonucci, Chiellini, Criscito; Cristante, Jorginho, Pellegrini; Chiesa, Balotelli, Insigne.
Don’t forget to follow World Soccer on Facebook and Twitter for all the latest UEFA Nations League news.
Previous Post