The inaugural UEFA Nations League tournament begins in September with all 55 members of UEFA competing, however it should be acknowledged that only 12 can win it in any given tournament.

This is because only teams in League A can win the tournament. The format works like this;

There are four leagues; A, B, C, and D, and within those leagues you have four groups. Within those groups are either three or four teams and they will all play each other in home and away fixtures.

Teams in leagues B, C and D are playing for promotion into the league above, with the group winner earning promotion. (The bottom team of the group gets relegated down into the league below). Whereas the four group winners in League A will go into a knockout format to decide the winner of the whole tournament. This will also decide the third-placed team. To see how the groups were drawn out, click on the link below. 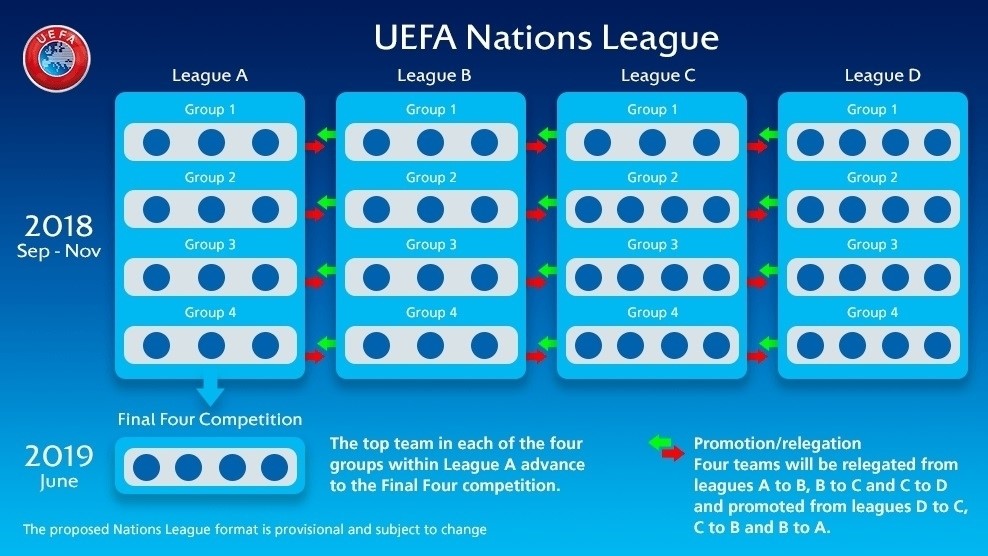 The matches are set to begin in September of this year and will continue to take place in both mid-October and mid-November as well.

The finals will take place in June 2019. (Check out the full fixture list by clicking on the link below).

The tournament has been designed to limit the number of meaningless international friendlies taking place and it has also created some enticing matchups to look forward to. For example Germany and France are in the same group as are England, Spain and Croatia. England of course will be looking for revenge against the Croats who beat them in the World Cup semi-finals in Russia earlier this year.