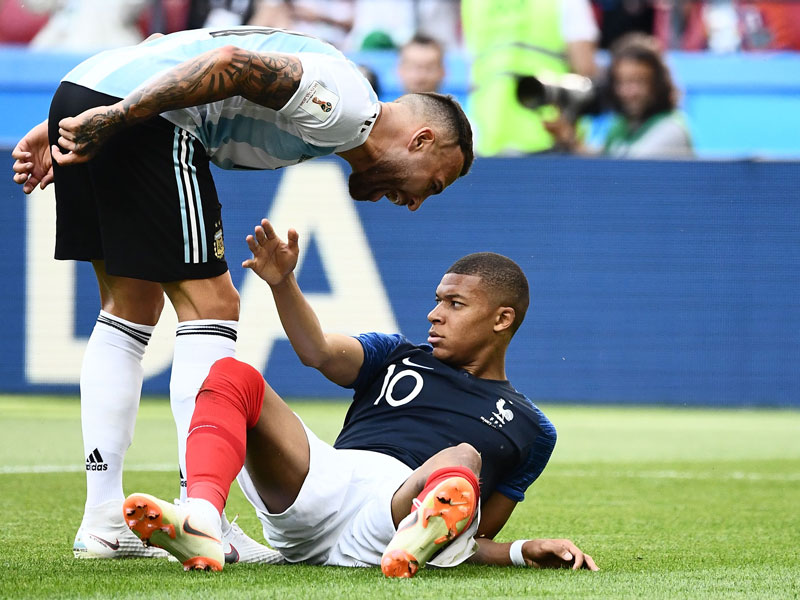 In stoppage time against France, Sergio Aguero’s goal gave Argentina a surprisingly late chance to save themselves.  Two minutes remained.  The French were flustered.  And centre back Nicolas Otamendi chose this moment to start a flare up.

It was a moment of insanity that highlights the shambles that Argentina have become.  And much of that has to do with Otamendi’s position.  Because Argentina’s problems can be traced back to 2007, when Roberto Ayala, their last top class centre back, retired from international football.

The inability to replace him is evidence of a wider crisis.  Between 1995 and 2007 Argentina won the Under-20 World Cup on five occasions, producing a conveyor belt of talent for the senior side.  But ever since, their youth teams have been very poor, and the production line has slowed down.  The effects on this were very clear from Argentina’s performances in Russia where the ageing team, lacking a top class keeper, full back, centre back or central midfielder, were incapable of defending efficiently.

The 2018 collapse has been coming for some time – indeed, ever since the loss of Ayala.  Argentina only just managed to qualify for the 2010 World Cup.  Diego Maradona got them over the line in the end with a defensive side.  Then, in South Africa, he went for something more expansive and the result was a thoroughly predictable thrashing by Germany.

Under Alejandro Sabella the team qualified for 2014 playing an extremely open brand with football, with Lionel Messi, Angel Di Maria, Sergio Aguero and Gonzalo Higuain all firing together.  Sabella confessed that it left the defence vulnerable, admitting that when his team were under attack there were times when all he could do was close his eyes and pray.  Come the World Cup in Brazil, it soon became clear that the individual stars were suffering from end of season burn out.  An open game was no longer a possibility.  Instead, Argentina retreated into deep defence and relied on flashes of Messi brilliance to reach the final – or rather, on flashes of Messi brilliance plus the covering work of holding midfielder Javier Mascherano to protect the back four.

And four years on little has changed – apart from the fact that no one has emerged to replace Mascherano, who no longer has the legs to carry out his defensive function.

And this has been Messi’s misfortune.  He has played his international career at a time when Argentina have been unable to form a coherent and sold side around him.  This pre-dated the coming of coach Jorge Sampaoli, and has merely been amplified by something that should have been abundantly clear to all when he was appointed a year ago – that Sampaoli made his name playing a high pressing style which Argentina do not have the defensive pace to play.  Utterly lost, the coach was switching schemes and line ups in desperation until the players imposed an orthodox back four on him.

Whatever system they had used against France, it is not clear that Argentina could have found a way to cope with the pace and power of Kylian Mbappe.  But they would have had a few more seconds to force an equaliser if their centre back had not been more interested in picking a fight.