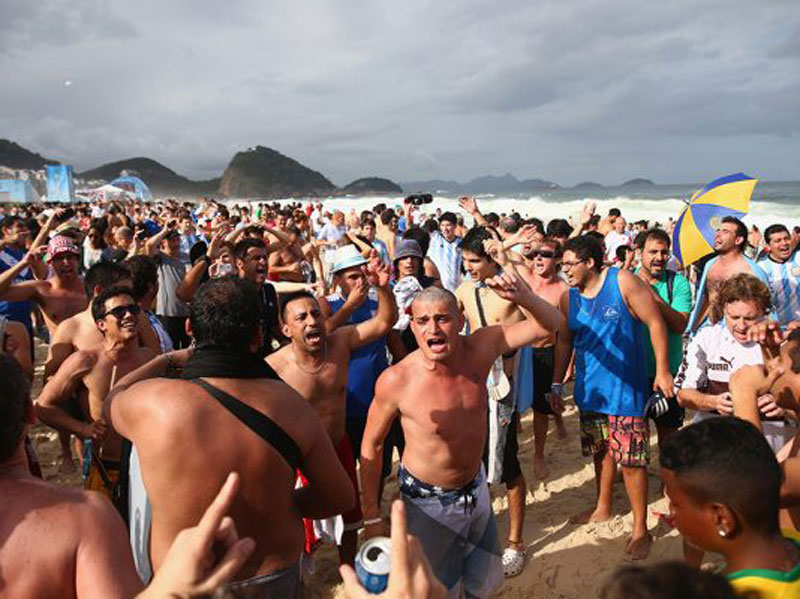 Tim Vickery’s Notes from South America: A United Nations For The Common Man

One of my strongest memories of Brazil 2014 is the last one.

The final had been played, Germany had beaten Argentina and after a flurry of activity the articles had been written, the TV appearances completed and the radio work done – with one exception.

I took the underground across Rio with months of sleep to catch up.  But there was only time for a little nap.  I set the alarm and after a couple of hours wearily stumbled out of bed for one last radio commitment – broadcasting for the BBC World Service from a beachside kiosk in Copacabana.

I really did not want to go.  But I am so glad I did.  Because the atmosphere was magical.  All through the tournament the Avenida Atlantica, the main drag alongside Copacabana beach, had felt like the centre of the world.  The TV studios were there.  And so were the fans.  Rio de Janeiro is the capital of Brazilian tourism.  Almost everyone who came to the World Cup visited the city.  And the vast majority of them found their way to – and spent much of their time on – the Avenida Atlantica.

The road played host to some protests – entirely legitimate outrage at the amount of public money spent hosting the tournament.  But for the most part the Avenida Atlantica was a joyful global throng, people from all over the planet parading and celebrating, interacting with each other and making international friendships – the silent work of football that never receives enough publicity.

The last night felt especially charged, because no one wanted it to end.  Everyone, even the Argentina fans who had suffered the defeat of their team, appeared to be sharing a common sentiment; while we are all here together, the World Cup is still alive.  When we go to sleep, we will wake up the next day to find that the tournament already belongs to the history books.  So let’s keep it going for as long as we can, holding on to every last bit of the experience.

It was a wonderful example of why the World Cup remains so worthwhile.

The tournament no longer represents the pinnacle of the game in terms of quality.  Europe’s Champions League not only reunites the best players on the planet.  It also has them when they are fittest and freshest.  End of season burn out has clearly had a detrimental effect on the level of play in recent World Cups.  And the model of organisation has given rise to excessive and unnecessary spending.  And there are genuine causes for concern about the future; a 48 team tournament runs the danger of becoming hideously overblown.

But it will continue to bring people together, united by a common language that can be spoken with so many different accents.  In times of such international tension, this is more necessary than ever.

And whatever the political climate, the World Cup is a magnificent means to make people feel represented on the global stage.  Another magical moment is when the camera pans down the team line up as the national anthems play.  On show then are the genuine male faces of the nation – much more representative than the politicians or diplomats.  The World Cup is like the United Nations for the common man.  Let the games begin!