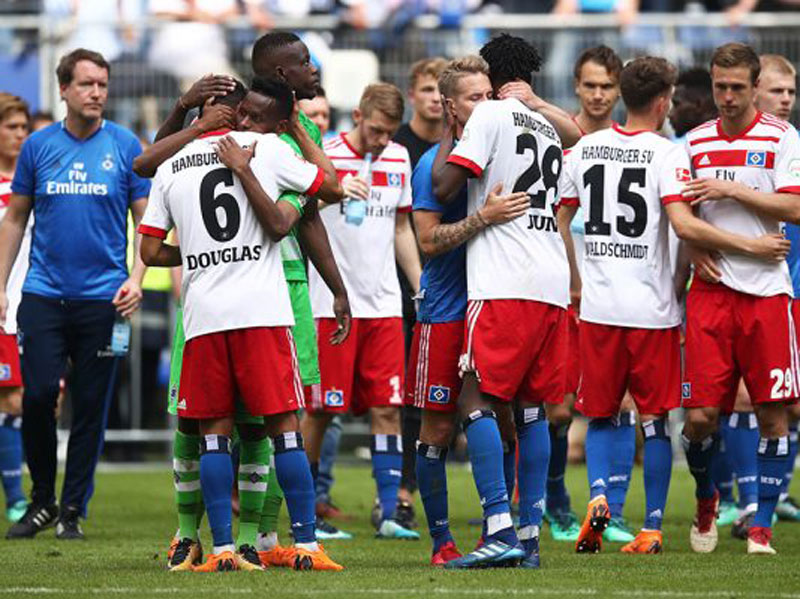 Nick Bidwell’s Notes from Germany: Hamburg Prepare For Life in the Second Tier

Frequently in error, rarely in control, often in denial. How else to describe the state of play these past few years in the Hamburg boardroom? The succession of wrong turnings and miscalculations which eventually resulted in a cataclysmic end to the current campaign – their first-ever relegation from the German top-flight.

This once great club – European Cup winners in 1983 and six times national champions – used to be justifiably  proud of their unique domestic status as the only ever-present team in the 55-season history of the Bundesliga.  But in football there’s always another exam to pass and in recent times, the ‘Rothosen’ (Red Shorts) have barely revised at all.

After three relegation near-misses in the previous four seasons, the club powers-that-be should have been forewarned. Sadly, tragically, the warning signals went unheeded. It’s dangerous to continually tread close to the cliff edge.

Chronically inconsistent, collectively sub-standard and equally inefficient front and rear, the Hamburg Class of 2017-18 simply did not have enough in the locker to save themselves, though let’s not exclusively point the finger of blame at the players and the coaching staff.

For far too long, Hamburg have been an organisational mess, an institution which had lost its way. A symbol of bad business models, a total lack of long-term thinking and knee-jerk decisions of every shape and form.

The Volksparkstadion has become a place where continuity and stability whither away. Since 2010, the club has employed no fewer than 16 head coaches, including three this term in Markus Gisdol, Bernd Hollerbach and Christian Titz; six directors of sport have come and gone there in the last decade and generally-speaking, crisis management has prevailed.

Amidst such conditions of flux, if not pure panic, it’s hardly surprising that their player recruitment track record is so poor, spending heavily on a string of flops – among them Swedish striker Marcus Berg, the Brazilian duo of Alex Silva and Thiago Neves and so-called Croat boy wonder Alen Halihovic – and never really assembling a balanced, homogenous squad.

With his side about to ‘rough it’ in the second division bear-pit, Hamburg chairman Bernd Hoffmann has promised to “leave no stone unturned” in an immediate promotion mission and key to his plans is coach Titz, who up until March was responsible for HSV’s Under 21s and straight away sparked a mini-revival, winning four of his eight Bundesliga games at the helm.

“If Christian Titz had been in charge of HSV for the whole season, they would not be in the situation they now find themselves,” says ex-Dortmund and Germany libero Matthias Sammer. “I like his style. He doesn’t have  conservative or defensive thoughts. He stands for attacking, possession and courage.”

The author of many books on football coaching, Titz not only has the theoretical ground covered. He seems to know his practical onions too.

What We Learned This Week
1. School’s out – thank god.
Under-par for most of the season, yet still managing to edge out Leverkusen in the race for the fourth and final Champions League qualification spot, Dortmund have wasted no time shifting into post-mortem mode. “What we need is a period of peace and calm,” said midfielder Nuri Sahin. “Early in the campaign we had a lot of problems in the dressing room. We had a player on strike (Ousmane Dembele) and a change of coach (Peter Bosz making way for Peter Stoger). It’s good that we won’t be seeing one another for a few weeks.” The new Dortmund boss is expected to be Nice’s Lucien Favre.

2. No pressure drop for the Wolves.
For the second consecutive season, Wolfsburg have a do-or-die relegation/promotion play-off on their hands. Twelve months after seeing off second tier Eintracht Braunschweig, the Wolves now face Holstein Kiel, an upwardly mobile outfit who are pushing for back-to-back upgrades in category. “Every game, we play we look to be brave, get forward and win,” declared Kiel coach Markus Anfang. “We’ll be exactly the same against Wolfsburg. No one expected us to be in this position. We can go out and enjoy ourselves.”  The two-legged affair (May 17 in Wolfsburg and May 21 in Kiel) will be Anfang’s swansong with Kiel. Next season he will be in charge of Cologne, who, of course, recently dropped out of the Bundesliga.