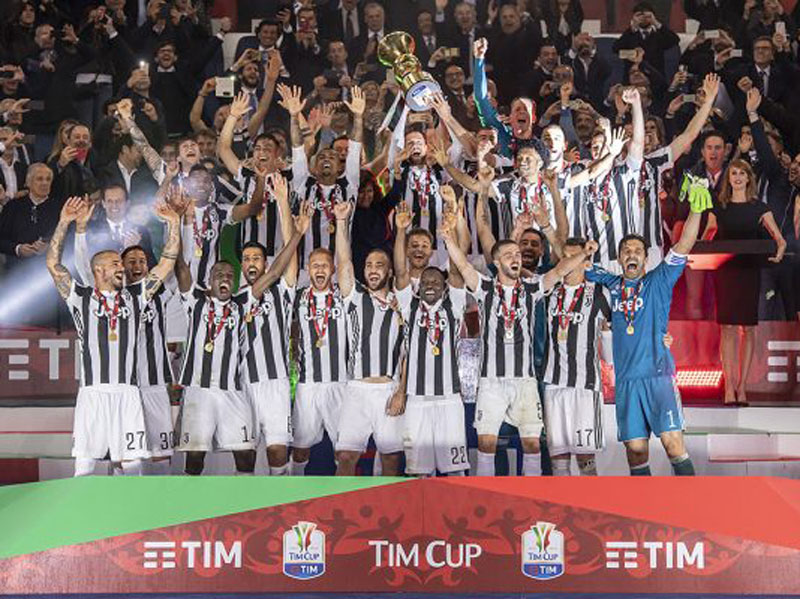 Paddy Agnew’s Notes from Italy: Seven in a row for Juventus

In the week that Old Lady Juventus underlined her total dominance of Italian football, not only by rubber stamping her seventh consecutive scudetto (effectively won last week) but also by pulling off a fourth consecutive, domestic League and Cup double, an obvious question asks itself. Is such dominance good for Italian football?

Obviously, to have a side win the league title seven times in a row raises serious questions about the overall competitiveness of the current Serie A. On the other hand, given the myriad problems it currently faces, Italian football would probably do well to put aside nationwide anti-Juve sentiment and acknowledge that there might be much to learn from the current Queen of Italian football, in terms of club administration (the club-owned Juventus Stadium provides the best example).

In the wake of the infamous Calciopoli scandal of 2006, and indeed long before that, half of Italy argued that Juventus owed much of its success to the favouritism the club appears to enjoy at the hands of both the Football Federation and the (Italian) refereeing classes. Such reasoning is inevitable.   Calciopoli appeared to provide proof positive that, faced with black and white shirts, Italian referees lapse into abject, dishonest “sudditanza” (subjection).

Yet, are Spanish, German or English referees entirely free from the same subconscious pressures when refereeing games involving Real Madrid, Bayern Munich or Manchester United, to name but the obvious? We could argue this for a long time. However, your correspondent would suggest that whatever about historic “wrongs” (for example, the penalty that was not awarded to Inter’s Ronaldo in an infamous Juve v Inter of April 1998), in the context of 20 years later, it is simply reductive and counter productive to deny that Juventus are the strongest side in current Italian football.

Juve’s midweek, 4-0 Italian Cup Final destruction job on AC Milan only further makes the point. Yes, it is true that whatever objective chance Milan might have had was blown out of the water by two veritable (and untypical) howlers from goalkeeper Gigio Donnarumma. Yet, the point is that Juventus most probably would have won anyway such is the club’s ability to ride out whatever storm, crunch match (Real Madrid excepted) that comes their way.

That Cup Final win over Milan also further illustrates the background to Juve’s current domestic dominance. A look at the Serie A roll of honour reveaks that between 1969 and 1991, no less than 11 different clubs won the Serie A title.   However in the 27 years since then, three clubs, Juventus, Inter and Milan, have between them won 25 of the 27 titles. The only “interlopers” were Lazio in 2000 and Roma in 2001.

In the age of TV rights driven club earnings, there have essentially been only three Italian “biggies”, Juve, Inter and Milan.  If Juventus now run the show by themselves, that is largely because the other two are currently in a state of relative crisis, as highlighted both by the Italian Cup final result and also by Inter’s 2-1 home loss on Saturday to Sassuolo, a defeat that could yet rule them out of the Champions League (Milan are already out).

Leaving aside Juve’s total dominance, arguably the most intriguing aspect of the current moment is the extent to which the born-again Napoli has been able to throw down a serious challenge to Juventus, finishing second three times in the last six years. More than that, Napoli came within a whisker of knocking the Old Lady off her throne this year.

Had it not been for two goals in the last three minutes of Juve’s 3-2 defeat of Inter two weeks ago, we might now be telling a very different story. Juve’s ability to pull that one out of the fire, just days after the disappointment of their Champions League quarter-final elimination by Real Madrid, was the stuff of battle-hardened champions.

Those three minutes not only bounced them back on top of Serie A but they were clearly a psychological killer blow for a Napoli team watching on TV as they prepared for their game, away to Fiorentina next day. In three minutes, the Fiorentina game went from one of a possible overtaking or “sorpasso” of Juventus to one of “hang-on-for-all-you-are-worth”.  Not surprisingly, Napoli cracked next day, losing 3-0 to Fiorentina and thus effectively waving bye bye to their title chances.

For those reasons, however, it would clearly be a pity if Napoli and their owner, cinema tycoon, Aurelio De Laurentis, decide that the time has come to part ways with Maurizio Sarri, the Napoli coach who has done so well over the last three seasons. In the absence of the two Milan teams, Sarri’s Napoli remains the only serious current challenge to the Old Lady. It says much that third placed Roma, this season a surprise Champions League semi-finalist, are all of 18 points behind Juventus in the Serie A table.

By the way, do not read too much into Sunday night’s 0-0 Roma v Juventus draw. With Juve having already won the title and with Roma already qualified for the Champions League, this was a game that missed out on the sturm und drang that normally enlivens this fixture.

Which is a lot less than can be said about arguably the most significant game of the last day of the season, next weekend, when Lazio entertain Inter in a Champions League decider next Sunday night. Inter need an away win, while Lazio require only a draw to qualify. With this game, a splendid Italian season may well end on a high note that, for once, is not about Juventus domination.