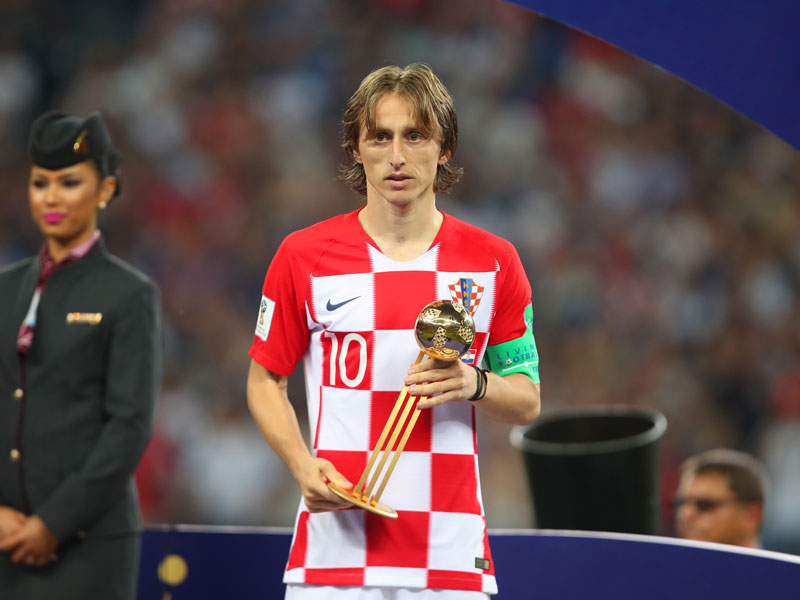 Real Madrid and Croatia midfield ace Luka Modric is unlikely to ever be heard echoing the words of late, great Liverpool manager Bill Shankly about life, death and the importance of football.

As a child of the Croatian War of Independence his formative years were stained with suffering, and as a result he has always focused on the big picture – the world beyond the wealth, status and glittering prizes of his chosen profession.

While a competitor from head to toe, Modric is an individual of sound perspective; never being discouraged by failure or setback, always taking success in his stride.

He has certainly enjoyed his time at the Bernabeu, where he is much appreciated for his scintillating approach play and where he has won the Champions League four times, in 2014, 2016, 2017 and 2018. Yet the 32-year-old also deserves the utmost respect for his humility and level-headedness.

When moving house in Madrid, he insisted on doing the removal work himself and he definitely did not show any delusions of grandeur when having a house built in his adopted hometown of Zadar on the Adriatic coast.

“People ask me why it’s only a mini-villa,” said Modric. “They want to know why it’s so small. There’s only four of us [wife Vanja, son Ivano and daughter Ema]. What are we supposed to do with the five or six rooms we don’t use?”

Brought up in the remote rural outpost of Modrici, a tiny hamlet on the slopes on the Velebit mountains in northern Dalmatia, his adolescence was the stuff of nightmares. As misfortune would have it, his home region was one of the epicentres of the war and barely a day went by without the sight, sound and smell of savagery.

The youngster, who was only six at the time, had been particularly close to his grandad – who looked after him when his parents went to work at a nearby knitwear factory – and their bonds went deep.

Along with his younger sister, Jasmina, the remaining members of the Modric clan had no other option but to flee, seeking refuge in the port city of Zadar, where they were housed in one of the largest hotels in the city, the Kolovare.

In many ways, the family had moved from the frying pan into the fire as Zadar was under constant Serb bombardment from both land and sea. Danger stalked every corner and for the best part of two years the city was under siege. Survival was in the lap of the gods.

Somewhat shielded by the innocence of youth, Modric simply got on with the job of being a child, making friends, getting up to mischief and playing football. Although he did not know it at the time, his destiny was taking shape.

Shortly after arriving in Zadar, he met another young Croat refugee, Marko Ostric, and the pair remain best friends to this day, often going on holiday together. A love of football was what united them and Ostric also went on to have a short professional career, playing in midfield for Medimurje Cakovec. But while Ostric would end up playing in an amateur league in Austria, Modric went on to become captain of his country and one of the world’s most accomplished midfielders.

During his time at the Kolovare, the young Modric was rarely without a ball at his feet. Kickabouts in the hotel corridors and on the crater-filled car park were what he lived for, and such was the skill he displayed that he was recommended to Josip Baljo, who was a director of the local club, NK Zadar.

“One day I received a call from a worker at the hotel,” recalled Baljo in an interview with Spanish Canal Plus. “He said, come and see this little kid who’s always playing football in our car park.”

Baljo did as requested, was suitably impressed and duly enrolled the seven-year-old, pulling strings so that the family could move to a hotel that was closer to the club’s ground.

Training sessions there would invariably be interrupted by incoming grenades and mortars. They were terrifying moments indeed, with everyone scampering for the air-raid shelters. So, to ensure the youngsters left the field as quickly as possible, the Zadar coaches used to offer a “hero of the day” award to the first person to make it to safety.

Not that it was his speed which first brought Luka to the attention of his instructors. “What I noticed straightaway was his ball control,” remembers Davorin Matosevic, who was one of his first coaches at Zadar.

“His touch was soft, velvety and precise. For a novice it was amazing.”

The perils of war apart, Zadar was a great place for Modric to start his career. The club was one of the founding members of the newly independent Croat league, in 1992, and were well-organised, innovative and had an excellent reputation for nurturing young talent. Josip Skoblar, a prolific goalscorer for Marseille in the 1970s came through the ranks there, as did the towering ex-Monaco and Rangers striker Dado Prso, who early in the new millennium led the line for Croatia.

Modric was as timid off the pitch as he was assured on it and his ability was there for all to see. With skill to burn, he was usually at least one step ahead of any would-be tackler. There was, however, just one problem: a marked lack of inches and physicality. He never seemed to grow.

“For me it was evident that he was destined to become a great,” says Zadar youth coach Miodrag Paunovic. “He was a ball player. However, not many believed in him because he was so thin and looked as delicate as a leaf. At that time in the Balkans, the key idea was that you had to be powerful to be a success in football.”

It was to be a refrain that Modric would hear time and time again. And arguably the most painful of his “too small to make the grade” verdicts came at the age of 12.

A fervent supporter of leading Croat side Hajduk Split, he could not contain his excitement on being invited for a trial. So he was inconsolable when casually told to try again next year.

For a while he contemplated quitting the game altogether before being talked out of it by Tomislav Basic, the head of Zadar’s youth academy. Convinced that Modric had the potential to be a top-class professional, Basic took him under his wing. He rebuilt the youngster’s self-belief, recruited a personal trainer to work with him and was always there to offer encouragement and advice.

Modric used to call him his “second father” and when Basic died in February 2014 few were as grief-stricken as the Real Madrid playmaker, who three months later would dedicate his Champions League triumph to his old tutor, telling those around him: “Without him, I wouldn’t be where I am now.”

His self-belief restored by Basic’s wise counsel, the teenage Modric became more and more marketable. The country’s top club, Dinamo Zagreb, were increasingly keen on bringing him on board, and after impressing in a youth tournament in Italy he was reported to be on the radar of Serie A clubs Juventus, Internazionale and Parma. International recognition would be on the agenda too, as he made his debut for Croatia’s under-15s.

Zadar did their best to keep him out of the clutches of others, but they could only do so for so long, eventually allowing the 16-year-old to join Zagreb in 2001. 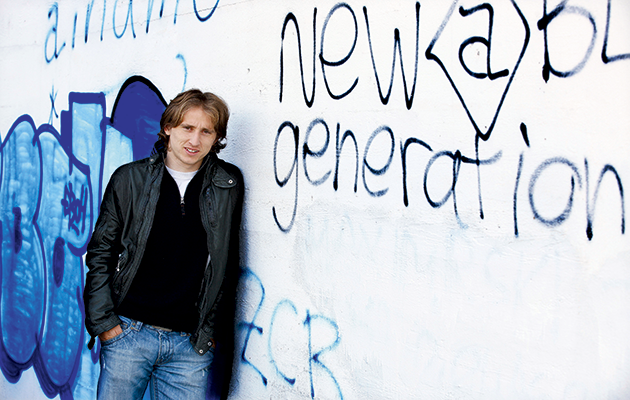 During his first 18 months at Zagreb, Modric played for the youth team, though for the most part he was unconvincing, combining occasional flashes of brilliance with longer spells of anonymity. A new life in the big city was a major culture shock, and while he had been the crown prince at Zadar he was now just one promising youngster among many. His new team-mates included Croat-Brazilian attacker Eduardo and Vedran Corluka, who he would rejoin later at Tottenham Hotspur.

Of the opinion that he needed to toughen up both mentally and physically, the Zagreb decision-makers opted to send him out on loan, and in the summer of 2003 he headed for Zrinjski Mostar in the Bosnian league, a championship which at the time was renowned for its borderline brutality. With opposition bully boys looking to target him and racial insults flying, it was a tough assignment and a real test of his temperament and resolve.

But he got through it, keeping his cool, discovering a previously untapped physical resilience and was so creatively inspired that he was even voted the league’s player of the year.

To all intents and purposes, Modric learned how to be a midfield all-rounder in Bosnia, with Zrinjski bringing out the worker and the fighter in him. It was a tenacity that would serve him well later in his career, particularly later in the Premier League with Tottenham.

Zagreb, though, were not quite ready to welcome him back on board just yet. They had another hoop for him to jump through and for the 2004-05 season they placed him on loan at Croat top-flight side Inter Zapresic, an outfit with a track record of looking after young Dinamo loanees.

Zapresic and Modric turned out to be beneficial for both parties. Modric established himself as the most gifted young player in the country and won his first cap for the under-21s, while Inter sensationally clinched the domestic league runners-up spot – the one and only time they have ever done so.

No longer able to keep him on the back burner, Zagreb signed Modric to a 10-year contract and duly began to play him on a regular basis. At Stadion Maksimir he was rarely anything less than magnificent and would have clutch bag of honours to prove it: three times a Croat league winner, three domestic cups, various player of the year awards and the first of his senior caps, awarded against Argentina in March 2006.

A lucrative move to the European football mainstream was only a matter of time. At one stage Arsenal were said to be at the front of the queue, while Manchester United manager Alex Ferguson was said to be an admirer and, according to Camp Nou insiders, Barcelona passed up a chance to land him in 2008.

“We brought him to Barcelona to get to know him,” revealed ex-blaugrana scout Bojan Krkic Snr on a Catalan radio sports show last year. “We met him for coffee. He left a very good impression. He was speaking fluent English and came across as very intelligent. Very switched on.

“He was a player with a winning mentality, but the club weren’t thinking so far ahead in the future. Only in the short to medium term.”

Barcelona’s loss would be Tottenham’s gain. In his four seasons in England he was poetry in motion and is quite rightly thought of as one of Spurs’ all-time great midfielders, keeping good company with Danny Blanchflower, Glenn Hoddle and Paul Gascoigne.

Only once have Croatia placed one of their own on the Ballon d’Or podium, with Davor Suker finishing runner-up in the 1998 poll. If there’s any justice, extraordinary everyman Luka Modric should be the second.