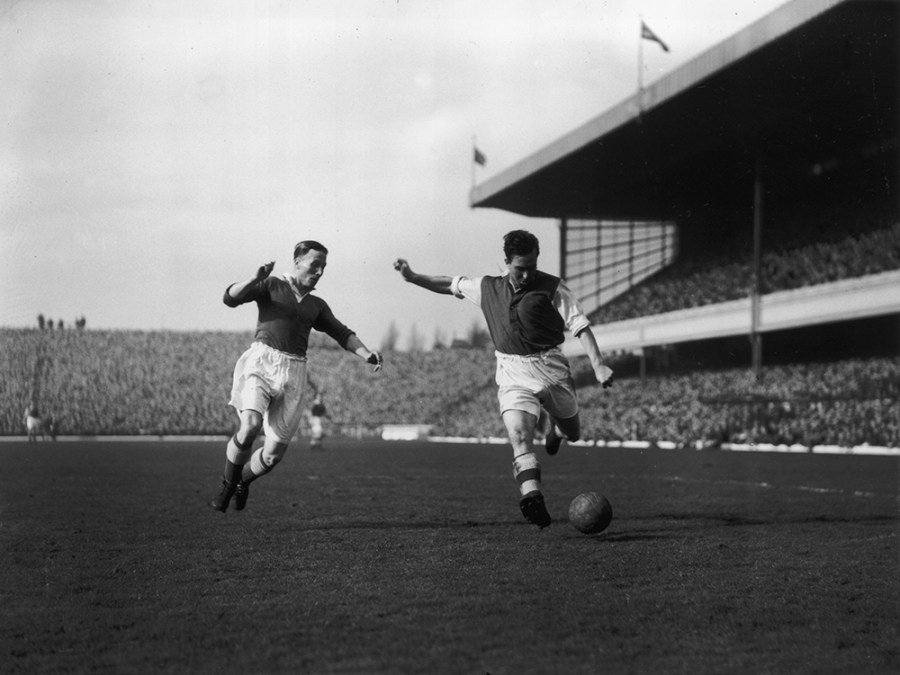 The Editor of Wisden’s almanac paid a generous tribute to Denis Compton on the 100th anniversary of his birth. For me as a schoolboy Compton was an idol, whether he was playing football for Arsenal and England or cricket for England and Middlesex.

He played for England against Scotland at Wembley in the first professional match I ever saw, one of 11 wartime appearances he made on the England wing, plus a Victory international at Hampden in 1946 against the Scots. None of these games alas carried full international caps, the huge irony being as we shall see that his elder brother, the towering Leslie Compton, would at the age of 38 – to the horror of England manager Walter Winterbottom, who wasn’t allowed to pick the team – play twice in a week for England, winning two full caps in 1960.

As a cricketer Denis was an outstanding batsman who could also bowl to some effect with his left hand; just as he could work his spells with his left foot. He was an utterful fearless batsman who never wore a helmet. How well I remember him skipping down the wicket to deal with balls almost every other batsman would have stayed more cautiously in the crease to deal with.

He was a member of the devastating wartime English attack which scored eight goals in a game at Manchester against Scotland. Late in the war, he was posted to India where he taught recruits how to shoot; with guns. On his return, he had put on a good deal of weight but that glorious left foot was as formidable as ever, whether he was cooly juggling balls, accurately crossing or shooting powerfully for goal.

Both as footballer and cricketer he quite overshadowed his larger and older brother Leslie, who spent years pre-war in the Arsenal reserves when the manager Herbert Chapman, after the retirement of veteran left-back Tom Parker deemed Leslie too slow, preferring to convert the young George Male from left-half to right-back. Yet in this position in the reserves he still managed to play in a couple of England trials.

Leslie played at full-back for England during the war and afterwards converted to a dominant centre-half, nicknamed “Big Head” by the fans. And, ignoring the orders of skipper Joe Mercer not to come up for a corner in the FA Cup semi-final against Chelsea at Tottenham, heading the goal that gave the Gunners a draw; they went on to win the Final. He was a genial, friendly cheerful figure who successfully kept wicket for Middlesex while Denis made the runs.

History distorted. Lately Rafa Benitez has been telling journalists too young to remember how he guided Liverpool to dramatic success in the 2005 Champions League Final against Milan in Istanbul.

Except he didn’t. The first half was dominated by Milan, for whom the Brazilian midfielder Kaka ran wild and free, inspiring his team to a 3-0 lead. In the dressing room at half-time, it was Liverpool skipper Steven Gerrard who insisted that midfielder Didi Hamann be brought on to mark Kaka. This he did to such effect that Liverpool revived to force a draw and win the Cup on penalties after extra time.

The so-called miracle of Istanbul was accomplished despite Rafa Benitez rather than because of him.

It is now stated that Chelsea’s billionaire owner Roman Abramovich will be obliged before being allowed to return to this country to explain how he amassed his fortune. There would be a very interesting tale to tell, for Abramovich emerged from poverty to impress the waning former Russian leader Boris Yeltsin and, like several other current oligarchs, succeeding in buying up giant utilities for a bargain price. That he remains a close ally of the Russian virtual dictator Vladimir Putin has done him no harm in the blinkered realm of English football. He had grandiose visions of completely rebuilding Stamford Bridge, which can harbour a mere 41,000 fans. But now?