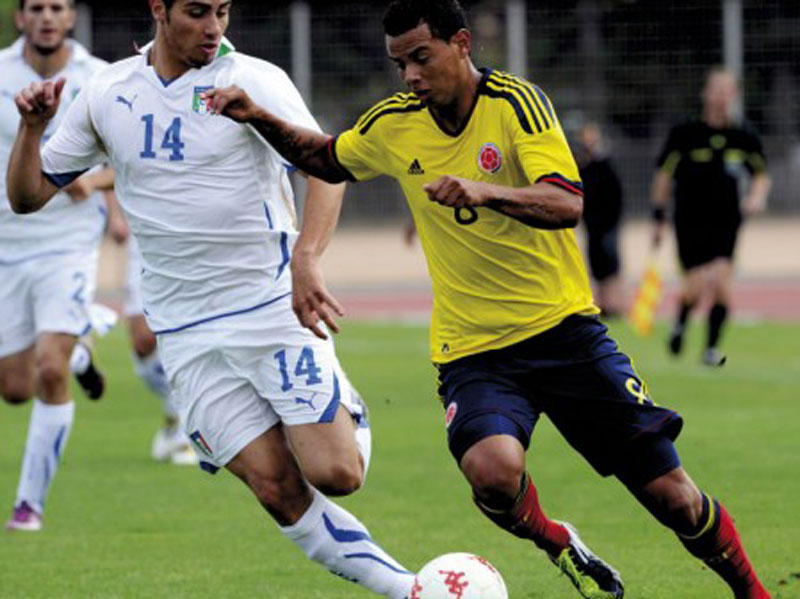 When Colombia sealed their place in Russia last October, Edwin Cardona must have thought his World Cup presence was guaranteed.

The 25-year-old attacking midfielder had been part of the team throughout the qualification process. He only missed three of the 18 rounds, starting eight matches and coming off the bench in seven. He contributed three goals – all of them important, making him the team’s joint second top scorer. His capacity to shoot from range looked set to make him one of Colombia’s main attacking threats in Russia.

Sure enough, coach Jose Pekerman named Cardona in his provisional squad of 35.  There has yet to be a formal announcement of the 23 who will go to the World Cup.  But all the indications are that Cardona will not be among them.  He was not included in the team’s training sessions in Bogota, and has not travelled to Italy with the rest of the squad for the next phase of preparation.

Things started to go wrong for Cardona a month after Colombia had qualified. They went to the Far East for friendlies, and after a little flare up in the game against South Korea, Cardona was spotted making a slanty-eyed gesture at the opposing players. He had walked into a scandal.

He quickly issued an apology – and, to be fair to him, he may well not have been fully aware of the racist implications of his gesture. The agenda of political correctness has come more slowly to parts of South America than to some other regions of the world. FIFA handed him a five game ban, ruling him out of Colombia’s warm up friendlies.

The absence of one player opens up opportunities for another. A key part of the battle to get into the Colombia squad switched to Buenos Aires.

Cardona plays there for Boca Juniors. This year, though, his form has declined.  It would seem that he has had his nose put out of joint by the return to the club of Carlos Tevez. No longer quick enough for the centre forward role, Tevez has tended to drop deeper, wandering into the space which previously had been Cardona’s.

Meanwhile, across town, River Plate were giving a platform for a rival attacking midfielder.  Juan Fernando Quintero filled the role of back up to James Rodriguez in the last World Cup, and scored a goal against Ivory Coast. But thereafter his interest in the game appeared to decline. He put on weight. There were even rumours that he was about to give up football and concentrate on music. This year Porto loaned him to River Plate – a club whose tradition for inventive playmaking looked a good match for Quintero’s intelligent and talented left footed promptings.

Enthused by Quintero’s revival, Pekerman brought the player back into the Colombia squad for the visit to France in March. Quintero was introduced for the last 10 minutes, with the scores level at 2-2.  He initiated the move that led to a Colombia penalty – and then left no one in any doubt about his ambition by stepping up to grab the ball and slam home the winner. This, it would appear, is the moment that Quintero won a place on the plane to Russia – and Cardona’s spot came under threat.

It is entirely possible that Pekerman was never entirely convinced by Cardona, who is not the most mobile of players. It could be significant that the three qualifiers in which he did not play include the trips to Brazil and Argentina. Perhaps the coach feared all along that Cardona was a luxury player, not to be trusted in the heat of the World Cup.  But had he not made a stupid gesture against the South Koreans, Edwin Cardona would surely have had a chance to push his claims in the warm up friendlies.