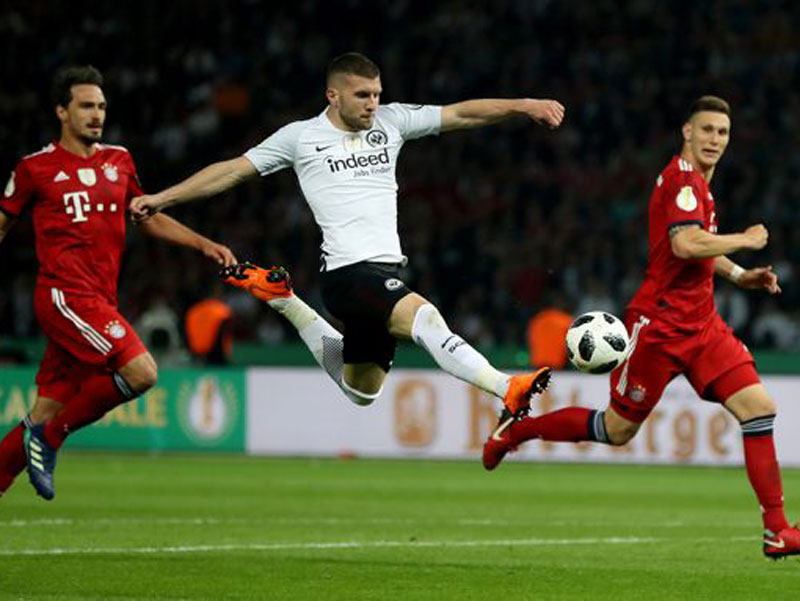 “We need some of our players to produce top performances in important games and not only when we face weaker opponents. We’ll be working on this.” Bayern Munich president Uli Hoeness had good reason to be disgruntled in the wake of his side’s shock 3-1 loss to Eintracht Frankfurt in the DFB Cup Final.

With a domestic double within reach and repeatedly-decorated coach Jupp Heynckes in charge for the last time, Bayern should have been chomping at the bit to end the season on a high. Yet inexplicably failed to show up in Berlin, looking a pale shadow of the team which recently cruised to the Bundesliga title with 21 points to spare.

Just when they needed to deliver, to assert their Deutschland-wide dominance, Bayern instead lapsed into self-sabotage. Leaden-footed and lumbering in central defence where both Mats Hummels or Niklas Sule often trailed in the slipstream of two-goal Eintracht attacker Ante Rebic. Slow and predictable when attacking; careless in possession – step forward James Rodriguez – and unusually vulnerable to a counter-attack.

In many ways, this cup final reverse was a carbon-copy of Bayern’s loss to Real Madrid in last month’s Champions League semi-final. Against Real, the Bavarians were in control for long periods, only to be ultimately undone by a combination of poor finishing and a lack of defensive concentration.

Interestingly, Uli Hoeness insists that Bayern will not solve the killer instinct problem by throwing money at it. He essentially thinks the squad is good enough, that all will be well with a dollop of big match mental fortitude.

“We don’t have to do very much,” claims Hoeness. “All that’s lacking are subtle changes. We were comfortable German champions, only a couple of centimetres from reaching the Champions League final and were DFB Cup runners-up. I won’t let this outstanding season be portrayed as a bad one.”

Bayern’s one consolation from the Berlin debacle is that Niko Kovac, the Frankfurt boss who plotted their downfall, soon will be setting the tone at the Allianz-Arena. Prior to the cup final, a popular school of thought was that the Croat was too inexperienced to handle the huge pressures at Bayern. Far fewer are doubting him now.

His Frankfurt side are expertly organised and drilled, they are busy, fearless and intransigent and as Kovac proved throughout the final, he certainly knows his strategy and tactics. His gameplan – pressing Bayern high, picking their pockets, then immediately looking to spring runners – worked a treat and so did his half-time decision to switch the jet-propelled Rebic from the left-flank to a more central role.

Uli Hoeness prefers a Bayern based on marginal gains to superstar acquisitions. To Niko Kovac, the considerable task of making it happen.

As was widely-expected, Dortmund have appointed Lucien Favre as their new head coach. The Swiss boss, who for the past two seasons has been in charge at French club Nice, will take over in the ‘Schwarz-Gelben’ technical area from caretaker Peter Stöger. Favre is a tried-and-tested Bundesliga campaigner, having enjoyed European qualification with both Hertha Berlin and Borussia Mönchengladbach. Previously linked to the big two German coaching posts (Bayern and Dortmund), the 60-year-old finally has elite opportunity.

In a repeat of last season’s eleventh-hour escape act, Wolfsburg owed their top-flight survival to success in the relegation/promotion play-offs, saving their bacon with a 4-1 aggregate victory over second tier bronze medalists Holstein Kiel. Not that the vanquished were particularly impressed with the so-called betters. ” We didn’t fail, ” declared Kiel midfielder Dominic Peitz. ” The ones who really failed were Wolfsburg; their ideas and the way they put a team together. They won both games against us and played well. But that’s what you would expect from players who for much of the season have been more concerned with counting their money. ”