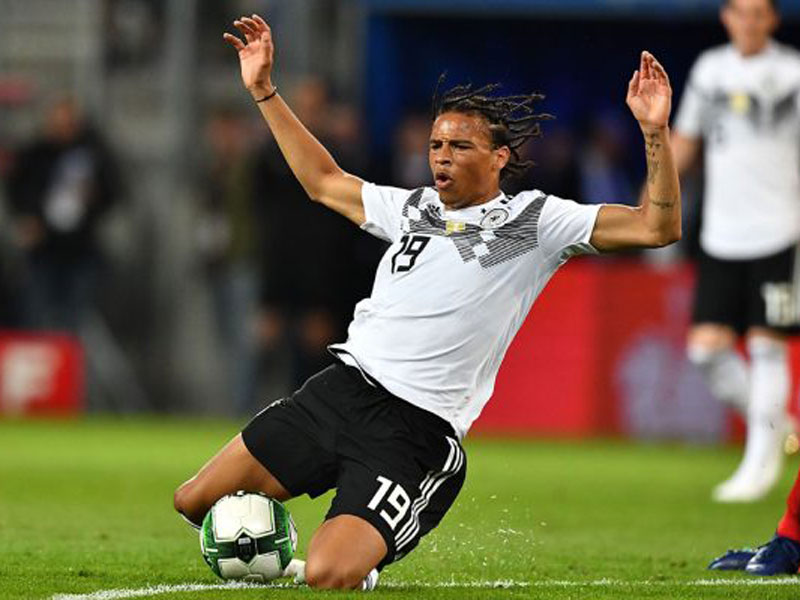 One of the four players to be cut from the Nationalmannschaft World Cup squad – along with Leverkusen keeper Bernd Leno, his club colleague and central defender Jonathan Tah and Freiburg striker Nils Petersen –  young Manchester City left-wing wizard Leroy Sane is an enigma for many German-based fans and pundits.

So spectacular and electrifying this season for the runaway Premier League winners. Yet often only a ghost when turning out for Deutschland. A fish out of water.

In his 12 games for the national team since making his debut in a friendly against France in November 2015, he has not scored a single goal and generally has not done himself justice at all. Poor in his decision-making, seemingly not on the same wavelength as his teammates and inclined to run into dead-ends.

It often has looked as though he is trying too hard for Germany, a surfeit of adrenaline rendering his play frenetic and uncoordinated. Under Bundestrainer Joachim Löw, there is a great deal of structure in the way Germany attack. Loose cannons, however explosive, do not especially fit the bill.

Above and beyond, attackers with skill, explosiveness and game-changing ability, Löw demands players who totally buy into his grand design for finely-tuned teamwork. Up until now, Sane either has been unable or unwilling to the study the script.

Löw currently looks at Sane and sees a highly-gifted young man who still has certain demons to slay: his carelessness, his soliost tendencies and a distaste for tracking back.

“It was a close race for selection between Leroy Sane and Julian Brandt (Leverkusen),” explained Löw when announcing his squad. “Both have tremendous qualities, both are strong in one-on-one situations. Leroy is undoubtedly a huge talent, but he has not quite arrived in games for the national team. Maybe that tipped the balance.”

What a pity that such a brilliant, instinctive starlet will not be displaying his wares in Russia. With his extraordinary dribbling skills and pace, he would he made have made the perfect World Cup impact substitute, a nightmare for tiring defenders.

One last question – if Pep Guardiola can bring the best out of Sane at Manchester City, why haven’t Germany ?

What We Learned This Week
1. Bayern court Digne
German football bible Kicker have reason to believe that Bayern Munich are lining up a bid for Barcelona’s French international left-back Lucas Digne, who after two years of understudying Jordi Alba at the Nou Camp, is keen to move on. Valued at around 17 million euros, Digne is also on the watch-list of Serie A clubs high-flyers Juventus and Internazionale.

2. Galactico to Gelsenkirchen?
According to Spanish sports Marca, the fount of all knowledge when it come to inner workings at the Bernabeu, Schalke have made enquiries about Real Madrid’s Croat midfielder Mateo Kovacic. The Royal Blues are thought to regard the 24-year-old as the perfect replacement for the Bayern Munich-bound Leon Goretzka.