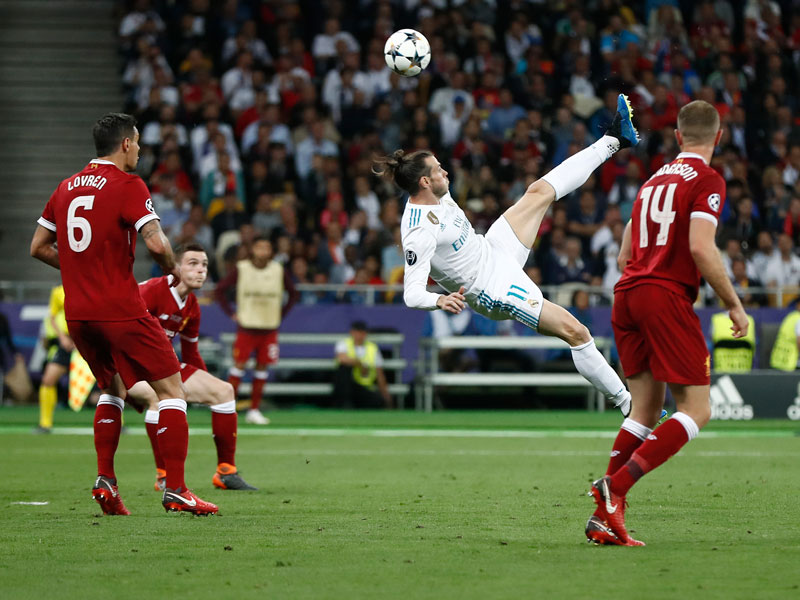 Gareth Bale’s ridiculous goal against Liverpool in the Champions League final recently has re-ignited the debate on what is the greatest goal ever scored in the competition. It was unbelievably good but there have been some incredible goals in the competition throughout the years. We take a look at some of our favourites in this piece. Which is your favourite and are there any we have missed?

In no particular order, we start with Lionel Messi.

Arguably the greatest goal Messi has ever scored given the situation and opponent, during the first leg of the semi-final in 2011 Messi had the ball just inside the Madrid half. Nothing was on, the defence was set. But suddenly Messi jinked and dribbled past several Real Madrid players before slotting home with his right foot. Truly a ridiculous goal.

One of the most fantastic pieces of skill in the competition we have ever seen, Roberto Carlos loops the ball into the Leverkusen box, and in one swift strike with his left boot, Zidane smashed it into the opposing goal. What made it even more memorable is Zidane chose to produce this moment in the 2002 final, which Madrid would win.

It was the 93rd minute and Barcelona, as it stood, were going out of the competition at the semi-final stage against Chelsea. A 9th minute goal from Michael Essien looked like the crucial difference. Barcelona are bombarding the Chelsea box and the ball eventually came t the feet of Lionel Messi. He then laid it off to Andres Iniesta who struck a beautiful shot with his right boot into the top right corner of the Chelsea goal. It was the away goal they needed and sent Barcelona through the the final, which they win against Manchester United.

During the 2005 final AC Milan were already 2-0 up and that became three thanks to a brilliant goal. Kaka picked the ball up inside his own half and split the Liverpool defence with a perfect pass to Hernan Crespo who deftly chipped it over Jerzy Dudek. Of course we all remember what happened next.

The man on the scoresheet says Raul, but all the plaudits should go to the artistry of Fernando Redondo who produced an amazing piece of skill to take it past whining berg and set up Raul with a simple tap in. It would prove pivotal too as Madrid won 3-2 and they would go on to win the tournament that year.

Like Messi, Cristiano Ronaldo scored probably his greatest ever goal in the Champions League. During the first leg of a quarter-final against Juventus, he had already put his side 1-0 up in the third minute. The in the 64th, Dani Carvajal played the ball into the box, and in a perfect display of timing, Ronaldo produced an overhead kick to slot it home. Everyone looked on with disbelief and he got a standing ovation from the Juventus fans.

Coming on as a substitute in the 1997 Final, Lars Ricken latched onto a ball played by Andreas Moller. With his first touch of the game, Ricken, noticing Angelo Peruzzi was off his line, lobbed him from 25 yards or so. It put his side 3-1 up and the victory was theirs.

In the very first minute of Internazionale’s Champions League quarter-final against Schalke 04, Manuel Neuer cleared the ball towards the half way line thinking the danger was averted. But Dejan Stankovic lined up and executed a perfect volley that soared into the Germans goal to put the Italians 1-0 up. They would go on to lose the tie, but its still a remarkable piece of skill.

One of the greatest team goals ever, during the second group stage of the 2000-2001 Champions League, Barcelona stringed together over 25 passes to set Marc Overmans through on goal. He then took around the keeper and a 3-1 win got them off to a perfect start in the group.

Another overhead kick by a Real Madrid star, Gareth Bale pulled this off with the game in the balance. At 1-1, the game could have gone any which way, but as Real Madrid put together pass after pass in build up play, you knew something special was about to happen. And it did when Marcelo played the ball into the liverpool box and Bale perfectly timed his strike. 2-1 and there was nothing Loris Karius could have done. One of the greatest goals in a final ever, Rio Ferdinand said;

“How dare he? He had no right to jump up, connect with the ball and think he was going to hit the back of the net.

“It is illegal what he has done. He is going away from goal and the connection he gets, it has not hit his shin.”