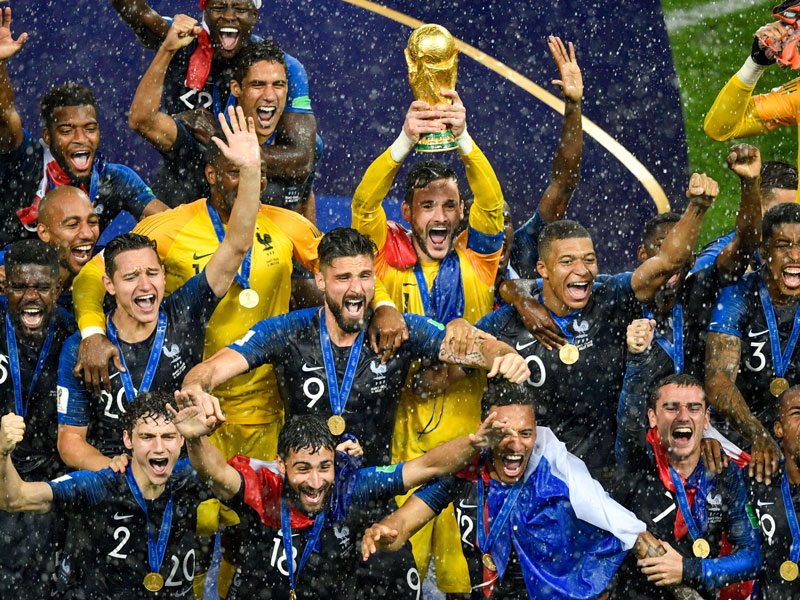 There have been twenty one  World Cups with eight different countries walking away with the trophy at the end of the tournament.

Brazil have won the most with five, closely followed by Italy and Germany/West Germany on four. Uruguay, Argentina and France have won it twice, and England and Spain have all won it the one time. Who do you think will win in Russia at the 2018 edition of the tournament?

Uruguay won the very first World Cup tournament. They had gone 2-1 down to Argentina after Golden Boot winner Guillermo Stabile scored on the 37th minute. But Uruguay came back in the second half to score three unanswered goals.

Four years later, Uruguay declined to participate after many European teams declined to travel to Uruguay for the 1930 World Cup.

In 1934 there was also a pure knockout format, and Italy were to quick to differentiate themselves as one of the favourites after a 7-1 against the United States. They then beat Spain and Austria to get into the final against Czechoslovakia.

Surprisingly, Czechoslovakia went one-nil up after a goal by Antonin Puc in the 71st minute. Italy equalised ten minutes later and extra time as the result. Angelo Schiavo scored the winner on the 95th minute. 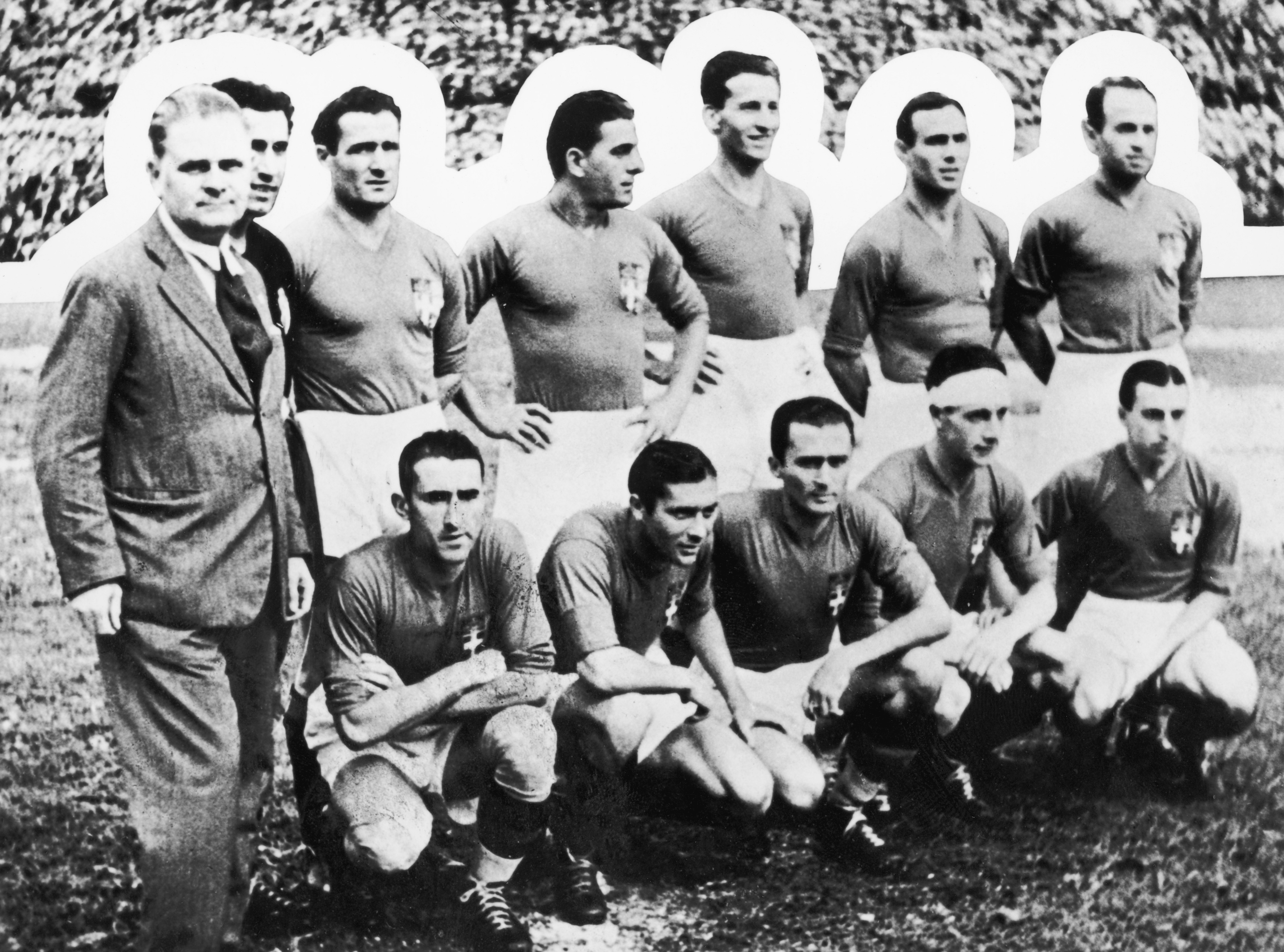 Italy returned to the final in 1938, and they would play a future European powerhouse team, Hungary. In 1938 though, Italy were too strong for the Eastern-europeans and came out as 4-2 winners.

Due to the Second World War, there was a 12 year wait for another World Cup. And 1950 was also the tournament where Uruguay returned to the global football stage, having not played in the previous two tournaments. Many nations behind the Iron Curtain, such as Hungary, refused to participate.

The format had changed in 1950 too with their being another group stage after the first. This would decide the winner so there was no specific Final as is the norm now.

Although the way things turned out, the final group game of the tournament acted as a final of sorts. Brazil had obliterated most teams in the tournament, and needed only  draw against Uruguay to win the Cup.

Uruguay needed to win to snatch the Cup. In front of 200,000 and after going 1-0 down to a Brazil goal, Uruguay pulled off the unthinkable and scored two second-half goals to win the Cup for the second time.

The 1954 final result was one of the biggest World Cup shocks ever. Hungary were arguably the best team in the world, lead by the great Ferenc Puskas. They had beaten South Korea 9-0, and then beaten their Final opponents West Germany 8-3 during the group stages.

No one gave Germany a chance, and it appeared it would be a rout after Hungary went 2-0 up in eight minutes. But they do not call this game ‘The Miracle of Bern’ for nothing, and West Germany quickly got on level terms after 18 minutes. The next goal would not come until the 84th minute, a World Cup winner by Helmut Rahn.

West Germany had shocked the football world and won their first World Cup.

1958 is the beginning of the era of Pele and Brazilian dominance. The great man guided Brazil to the final after scoring the winner against Wales, a then a hat-trick against France. He would go on to score two more in the final against Sweden. 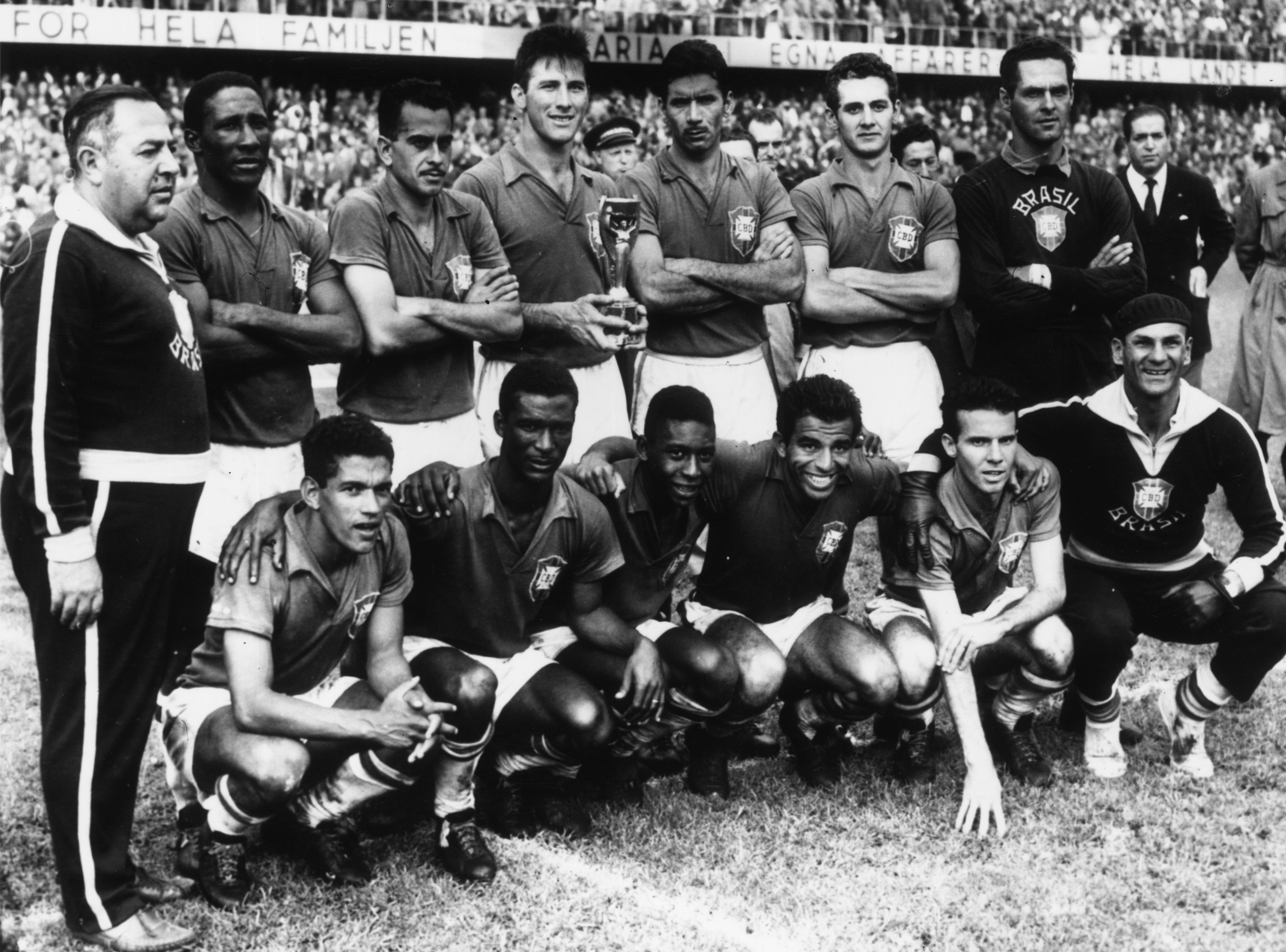 Four years on, Pele got injured against Czechoslovakia, but the Brazil team still continued to win largely due to the genius of Garrincha. Two goals against England and then two more against Chile set up a rematch with Czechoslovakia. The group stage result had been a 0-0 draw, but Brazil proved too strong in the final winning 3-1.

Held in England for the first time, the 1966 tournament did not start well. Before a ball was kicked, the trophy got stolen from an exhibit, and was later found by a dog called Pickles. Eventually, after a series of close results for both sides, England met West Germany in the final.

After a late equaliser for the Germans, the game went into extra-time which is when the controversy began. Geoff hurst swivelled on the edge of the German box and hit a shot that hit the crossbar and down onto the line of the German goal. It bounced out and i was cleared, however the referee gave the goal after consulting his assistant referee. To this day, the goal has divided opinion.

Hurst in the second half of extra time put the result beyond doubt with a great finish into the top left corner.

Brazil emerged back on top in 1970 with magnificent displays against pretty much every team they faced. The closest team to beating them was England who only lost 1-0 during the group stage. But in every other game, the Brazilians, once again led by Pele, scored three or four goals.

Including the final where they scored four on a tired Italian side who played a colossal match against West Germany in the semi-final.

Winning the Cup for the third time, meant Brazil took sole ownership of it, per FIFA regulations. A new trophy would be designed and made for the 1974 tournament.

Dutch Total Football took over the tournament in 1974, with Johan Cruyff leading the way. During the second group stage they had destroyed Argentina 4-0, and then beat East Germany and the mighty Brazil 2-0. They would meet Franz Beckenbauer, Gerd Muller and West Germany in the final.

All appeared normal too with Johan Neeskens scoring a penalty in the second minute to take the lead. but two german goals before half time put the pressure back on the Dutch.

Ultimately they could not find their way through the German defence and the new World Cup was handed for the first time to Germany. 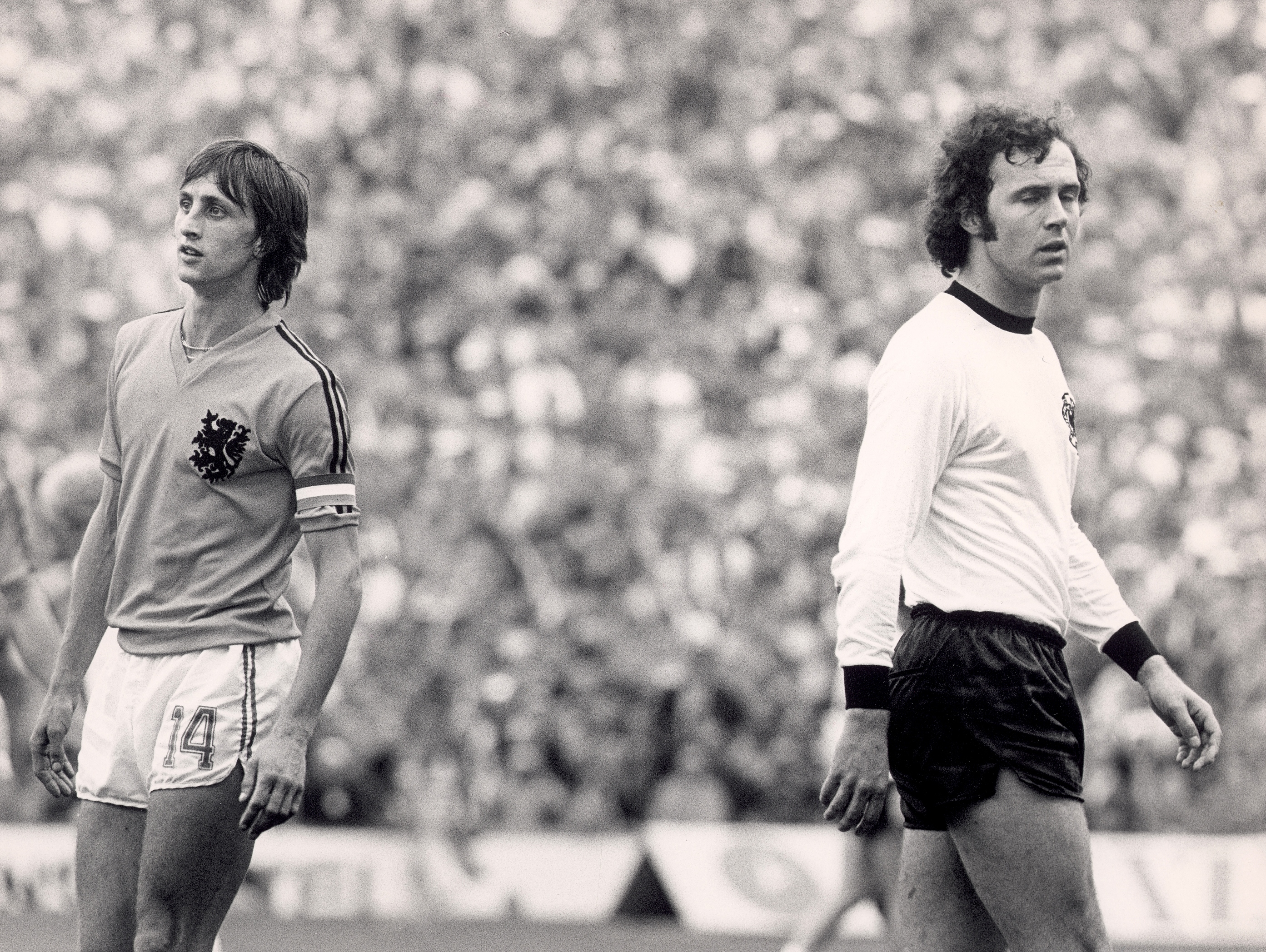 Cruyff and Beckenbauer would battle it out in 1974 (Getty Images)

The Netherlands again reached the final four years later. This time they were up against the hosts Argentina. And once again it winning the Cup was just one step too far because of two Argentinian goals in extra-time. The Netherlands would not reach the final again until 2010, which they would again lose.

Italy’s World Cup campaign in 1982 didn’t start too well, they had three draws in the first group stage against Poland, Peru and Cameroon. Regardless they got through. West Germany’s didn’t start perfectly either, with a 2-1 loss to Algeria in a result that shocked everyone. They then beat Chile and Austria to top their group.

In the second round, West Germany got through after a 2-1 against Spain, and Italy beat a quality Brazil team 3-2.

Both teams then won their semi-finals against Poland and France. The West Germany victory over France is often regarded as one of the finest games ever played.

The final was a pretty tense affair for 60 minutes, until Paolo Rossi opened the scoring. They would score two more before Germany picked up a consolation goal with ten minutes to go.

West Germany would again reach the final in 1986, and would this time they would lose to Diego Maradona and Argentina. Of course, Maradona had already caused controversy due to the Hand of God goal, and had shown his genius with the second goal against England.

But nothing could stop the little man from glory as he scored a brace against Belgium to get into the final. Despite being marked closely the whole game against Germany, he set up Jorge Burruchaga with a brilliant pass to score the winner against Germany with seven minutes to go.

Fours later, both teams would see themselves in the final once again, but the result was a different one, with Germany finally winning a World Cup Final again. In an ugly affair, the game was marred by the two red cards Argentinian players received during the 90 minutes.

Terrible tackles, penalty claims and controversial officiating were the most memorable facets of the game. Indeed the winning goal was a penalty, scored by Andres Brehme in the 85th minute. Diego Maradona would, after the game, blame the referee for the loss. 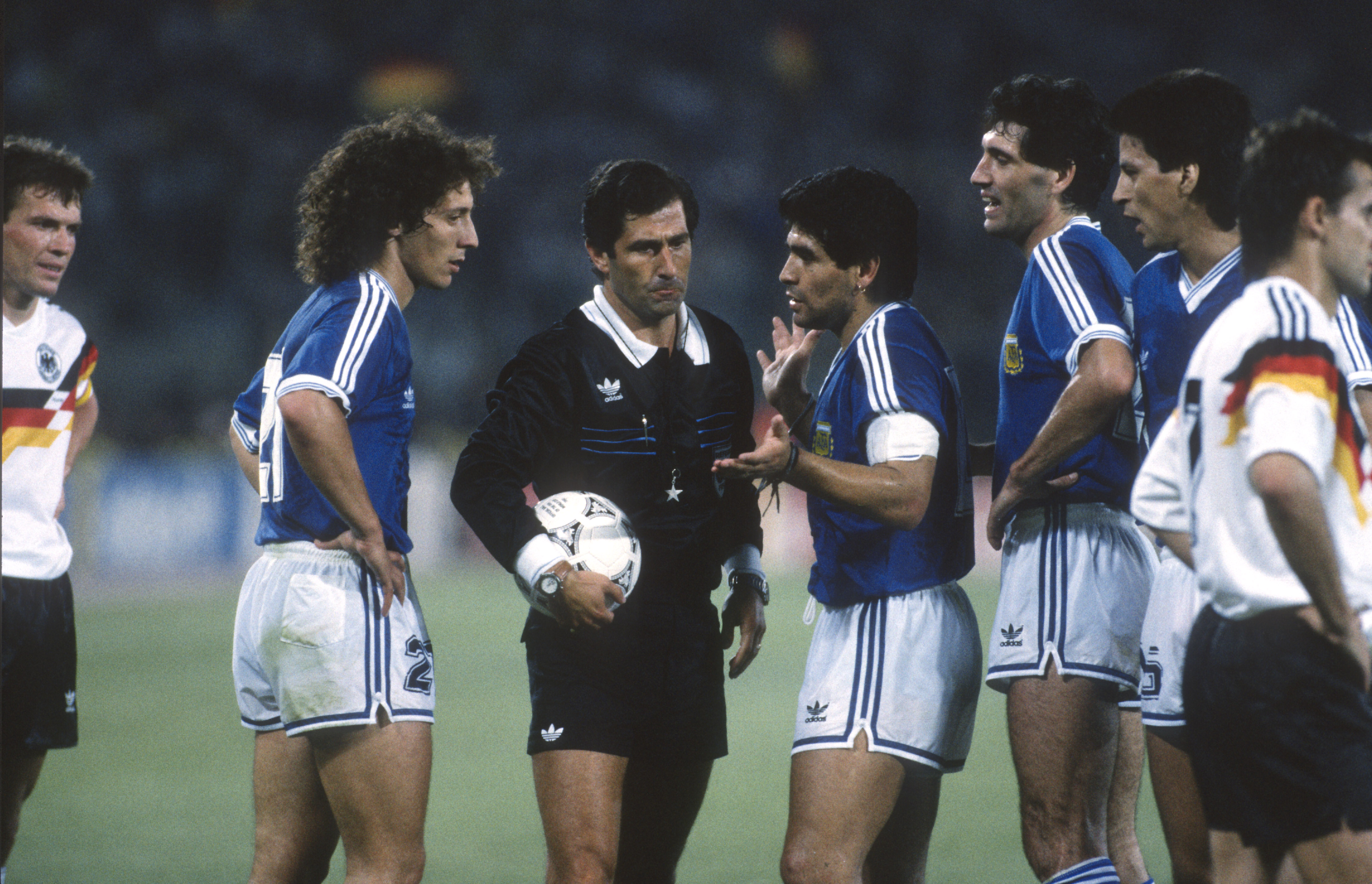 The 1990 final was marred by dirty play. Maradona would blame the ref for the loss (Getty Images)

The 1994 World Cup Final was the first to have no goals in it. Missed chances, especially by Romario, were aplenty over the 90 minutes and extra time, with the game later going to penalties.

Crucially, Italy’s two best players, Franco Baresi and Roberto Baggio, both missed their penalties during the shootout and with Romario, Branco and Dunga scoring, the Brazilians had won their fourth World Cup.

Going into the 1998 World Cup Final, there was immense controversy revolving around Brazilian talisman, Ronaldo. Their seemed to be issues around his match fitness, so much so that Brazilian coach Mario Zagallo said he would not play. Unquestionably the star of their team, this was a shocking revelation.

However it was then decided he would play against France. But it would not matter in the end, as France led by Zinedine Zidane, won 3-0. Zidane scored twice and won Man of the Match it what looked like his most memorable moment on the global stage. Little did we know what would happen in 2006.

Ronaldo would be back in the World Cup Final four years later, and would show his greatness that time around. Held for the first time in Asia, in South Korea and Japan, Brazil would face a solid Germany side in the final. Ronaldo scored the two decisive goals to put the 1998 memories behind him.

The 2006 final will be remembered for the head-butt Zidane did on Italian Marco Materazzi and the subsequent red-card he received in the 110th minute of the game. But unbelievably France still could have won the game. Had it not been for a David Trezeguet miss in the penalty shootout, both sides would have been on four made penalties each.

But he did miss and Fabio Grosso stroked home the decisive penalty to give Italy their fourth World Cup victory. 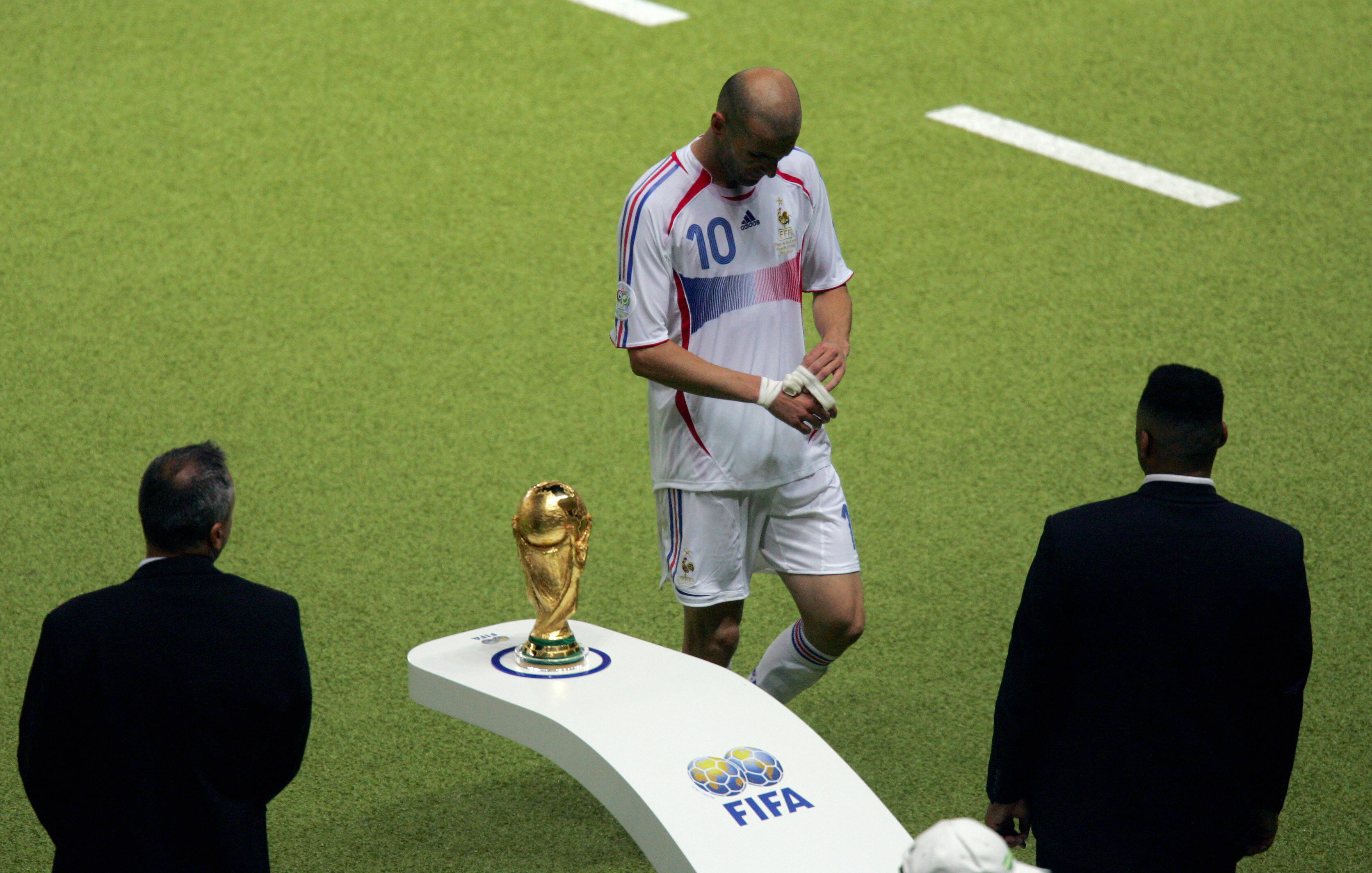 Zidane walking past the trophy after getting sent off (Getty Images)

Like 1990, this final will best be remembered as one of the dirtiest finals ever, with 14 yellow cards being shown, along with one red card to John Heitinga in the 109th minute. This would prove to be crucial too, with Andres Iniesta scoring the winning goal seven minutes later.

Argentina got to the final by scraping results together in 2014, and largely because of Lionel Messi. The World Cup was and still is the only  trophy missing from his cabinet, and in 2014 he had to beat Germany to get it.

Germany had previously absolutely destroyed Brazil 7-1 in one of the most shocking games in World Cup history. As a result, they were the favourites.

The whole game was tense and as you’d expect went into extra-time. Mario Gotze would score the winner with a brilliantly taken goal to give Germany a 1-0 victory and their fourth World Cup victory.

In the first tournament with VAR, France benefitted from a questionable decision in the final which awarded them a penalty after a harsh hand-ball.. Antoine Griezmann scored to put the side 2-1 up going into half time, in a moment that changed the complexion of the match.

Beforehand, Griezmann was involved in Les Bleus first goal as he dived to win a free-kick which was turned into Croatia’s net by Mario Mandzukic. Croatia came back to score at the other end through Ivan Peresic and it looked as if 1-1 was going to be the halftime score before the VAR moment.

In the second half, Paul Pogba and Kylian Mbappe put the French up 4-1 up and the match was over despite a Hugo Lloris clanger which gave Croatia hope.