Germany need to win, simple as that. They do not want to follow Spain in 2014 and go out early after winning the trophy four years previously. Obviously they have the players to do so, but changes need to be made. Nobody played that well, but Julian Draxler and Sami Khedira in particular were poor and we can’t help but think Leroy Sane would have given them something different.

Nonetheless he didn’t make the squad so players like Muller, Kroos and Boating have to play well. They have the experience to do so but Sweden will not lay down and let them have the three points. They will look to get something from the game after picking up a win against South Korea, and given how poor Germany were in their first game, the Swedes will fancy their chances.

Expect Sweden to set up in a more defensive formation where they will look to frustrate the Germans as Mexico did.

Related: Low Has To Pick Up The Pieces After Mexico Defeat

Get paid out as a winner if your team scores in the first 5 minutes!

After a forgetful game against Mexico, he needs to step up and lead this team. As one of the senior members of the squad, he must inspire the team to a much-needed victory. 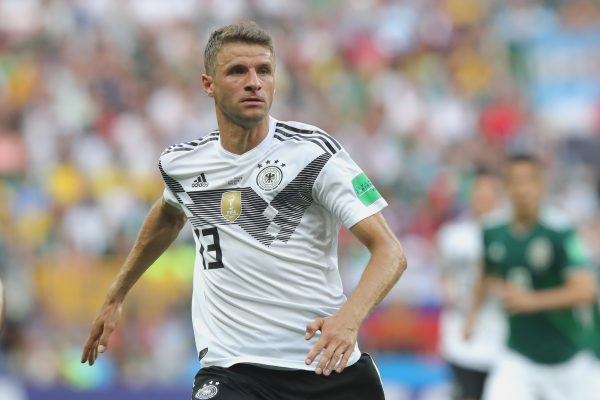 Thomas Muller needs to step up against Sweden (Getty Images)

In their first game, after 45 minutes of frustration, Belgium dispatched Panama eventually and showed their class with three goals in the second half. The first by Dries Mertens was a beautiful volley over the goalkeeper, and then Romelu Lukaku scored twice.

Tunisia frustrated England for 90 minutes on the 18th of June. Although England should have killed the game off in the first 30 minutes with several good chances that should have been slotted away. Tunisia tried every trick in the book to slow the pace of play down and set up well defensively to the extent that they nearly salvaged a draw. Expect them to set up the same way against Belgium, however there is more star power to deal with this time around.

And indeed that turned out to be the case, as Belgium smashed Tunisia 5-2 with two goals each for Eden Hazard and Romelu Lukaku, and one for Michy Bathsuayi.

South Korea played a pretty forgettable game against Sweden and lost 1-0 due to a VAR awarded penalty that Andreas Granqvist slotted home.

Mexico of course played a stunning match against Germany and won 1-0. If their final-third technique was more precise, they could have easily won 3 or 4 nil.

Given the sheer emotion and performance of that day, it could be difficult to replicate that, but we still expect Mexico to win. Hirving Lozano looks to be on good form and could score again.

Mexico secured another three points after goals from Carlos Vela and Javier Hernandez put them 2-0 up with no time left. Son Heung-min scored the consolation for South Korea.

Watch: Sublime control from Ahmed Musa before rifling it into the net